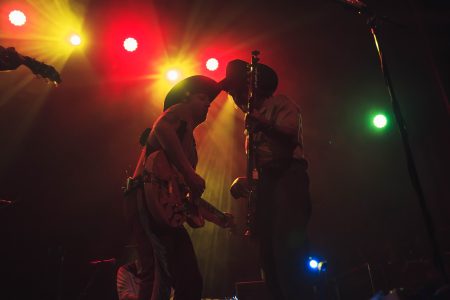 Midland, made up of Mark Wystrach, Jess Carson and Cameron Duddy, burst onto the scene back in 2017 with their debut single ‘Drinkin Problem’, which rose to number 4 on the country charts. The trio had been plugging away behind the scenes at the Sonic Ranch in Texas and during the pandemic, they took us back in time to share with us those early recording sessions in a documentary named after the studio where they recorded. Carson joins me over zoom, an impressive collection of hats hangs in the background, so that’s where we begin. “Cameron Morris in Waco, Texas, makes hats for all three of us and they’re all handmade, old school cowboy hats. It’s a really cool workshop that he’s got there. My go to is just a black cowboy hat that he made.”

Speaking of those early sessions in Texas, Carson begins, “It started out as an experiment, really. We all got together in El Paso, Texas, at this recording studio called the sonic ranch. We were there for 10 days, and just hung out and recorded songs. The cool thing is that we got to release that music, it would be sort of like a band releasing its first rehearsal. There was even somebody filming, so we have that Sonic Ranch, album and documentary.”

From that first session, it was clear that together, the boys had something special. “There’s a chemistry that I don’t think we’ve ever been able to describe in a very articulate way. It’s like the alchemy of these different people that come together, with different abilities. It creates something that’s greater than the sum of its parts,” Carson evaluates.

Following those successful sessions, Midland teamed up with Shane McAnally and Josh Osborne – two of the best songwriters and producers in the business as they co-wrote their breakthrough hit ‘Drinkin Problem’. “I don’t know, if I knew it was a hit. I don’t think that I necessarily knew that the world was going to respond to it in the way that it did. I knew that I personally loved it. I knew it was, at that time, probably my favourite thing I’ve ever been a part of,” Carson reflects on the bands overnight success. “The writing session for that was in the evening, which is rare. We wrote it in Nashville. I remember getting in the rental car after that co-write and just listening to the little voice memo recording that we’d made of it. It’s just one of those moments I think you’re always chasing as a songwriter, it’s kind of like magic.”

Now the trio spend much of their time writing and collaborating with writers and producers in Nashville. As they release their third studio album, ‘The Last Resort: Greetings From’ which features co-writers such as Ashley Gorley and Rhett Akins, Carson and his comrades have the Nashville style of writing down to a tee! “The formula that tends to be the most prevalent in Nashville is probably starting with a title. It could be someone coming in saying, ‘People say I got a drinking problem, but I got no problem drinking at all.’ Then you’re like, well, how do we put that to a melody.” However, on this latest record, Carson has written a couple of songs on his own.

‘Life Ain’t Fair’ is one of the strongest tracks on the record. Coining a popular phrase, Carson has crafted a lyric that is clever yet relatable to many. “I thought of it and I was like, Man how’s nobody written with that turn of phrase before? Sometimes when you have an idea like that, the first thing you do is go Google if anybody else has written that song,” Carson smiles. “I actually wrote it a long time ago. For those who haven’t heard it, life ain’t fair, like a carnival fair. It’s supposed to be a song that everybody can relate to through adversity and through their trials. I wrote part of it and then I finished it in the main lockdown part of quarantine. I didn’t want it to be a negative song, I wanted it to be something that kind of felt like everybody is connected and going through something together, even though everybody was so separated.”

The trio spent lockdown exploring their creativity and this record is the end product. They also had a chance to team up their good friend and fellow artist, Jon Pardi on their single ‘Longneck Way To Go’ which became Carson’s favourite on the album. “It just emerged as my favourite song on it. You can’t really choose a favourite, it’s too hard and it might change from night to night. But right now I really like that song. It’s one of the things that we do best, the uptempo Honky Tonk thing and it was fun to finally get to do this with Jon.”

Co-written by Rhett Akins and Ashley Gorley, Pardi became an obvious choice for the trio to approach with the track. “Jon was one of those guys, that was so obvious for us because we met him early on, on our first trips to Nashville. We love him, and we’ve hung out with him for years now. I think it’s more strange that we haven’t done a song with him yet. He really is the perfect person to have on that song.”

Midland have become firm favourites amongst country fans here in the UK and before the pandemic, the trio came frequently to our shores. After several postponements, they are returning this month. “This has been the most postponed tour in history,” Carson laughs. “So we’ll bring our typical Midland energy, because we don’t get over there as much as we would like to, we really kind of have to bring it when we are there so it’s always like a sprint when we’re over there. It’s fast paced, and we like it like that.” Being a big fan of architecture, Carson is looking forward to taking some time to walk round our cities in the down time between shows. “I love architecture in old buildings and stuff, so being able to see a modern city that is living on top of like an ancient city is really interesting. In Texas, when you’re in the city, it’s kind of all new stuff. But, you really get a sense when you’re walking around the towns in the UK that there’s been a lot of history happened here. It’s palpable.”

The band haven’t thought much ahead of this album and tour but they look to continue on the trajectory of their career. “We’ll be writing and recording new music and hopefully releasing music in a quicker album cycle,” Carson says with a wry smile. Their shows are bound to be some of the highest energy gigs you’ll see this year and their third album is their strongest to date.