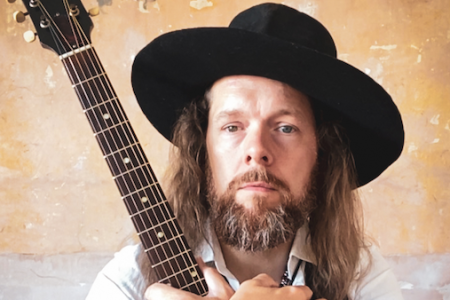 Mike Ross’ music knows no bounds, as he tries to be holistic in his delivery, he showcases his musicianship whilst presenting his most authentic collection of songs

Mike Ross has never allowed himself to be pigeon holed or popped inside a neat little genre box, all packaged up ready for marketing. Neither has he deliberately pushed the envelope or gone against the grain with his music, he simply plays what he knows and loves, and sees no boundaries within the creativity of music. “They don’t know where to put me in HMV but I didn’t get into music for that” Ross laughs. As he releases what will be the final instalment in the Clovis collection, ‘Clovis Limit: The Tennessee Transitions’, Ross shares his views on the industry and his style of writing and performing that has set him apart from the rest of the field.

Growing up Ross was exposed to a melting pot of genres, although by his own admission, his tastes never really graduated from the 70’s. “I always loved music – from the very first memory I have, there was Beatles and The Stones playing in the background” Ross begins as he thinks back to his earliest inspirations. There was a familiarity with music that he latched onto, “An album that sticks out to me is ‘Sticky Fingers’ by The Rolling Stones, it’s the first one where you hear the country influence, they’d been hanging out with Gram Parsons. When I first heard that record it was like I knew all the words despite never hearing it before. I’ve always had an affinity with it.” Though his parents didn’t play any instruments he had plenty of family members with a musical gene; “My Dad’s Mum was an organist in church, she was methodist – god-fearing, didn’t smoke, didn’t drink. My Mum’s Dad was the opposite, he was supposed to be a miner but he never went to work, he used to go down the club and he used to smoke, drink and sing. It was like having an angel on one shoulder and the devil on another”.
“My first guitar was a black strat, I traded it in for a pedal a few years later” Ross continues. He has the capability of getting the very best out of a guitar with his knowledge of the instrument, the various tunings and techniques. That’s what ‘Tennessee Transitions’ is all about really – technique. “I had two or three that I kept trading in and upgrading and I got my first proper guitar when I was 16, it was a Gibson. My favourite guitar is a Les Paul I bought when I was 19 and I still have it.” His face lights up as he talks passionately about his instruments whilst sitting in his home studio. As he carries on reflecting on his influences he says, “We used to make each other mixtapes, I’d pull things from my mum and dads record collection, some things from my CD collection and it would all be muddled up.” That was an idea he continued to explore in later life and in particular on the Clovis Limits.

“All these different genres of music – its all the same to me – it comes from a really small area of the States comparatively speaking” Ross muses, “You’ve got Clarksdale, Mississippi which is ground zero for the Blues and then you have Muscle Shoals which is not too far away and then you have Nashville top right, Memphis top left so its ridiculous to me to see any separation between these genres.” These parts of the world, not just the music that comes out of them, helped set the scene for the various records. “Looking at Clovis 1 and 2, they were written at the same time. I went to Nashville to record Clovis 1, I chose the ten songs that were obvious you’d go to Nashville to record with a session band. Then I was left with 15 songs, I took the ten rockiest and shaped them up to put on Clovis 2.” He recorded Clovis 2 at home in Sussex and, although not part of the plan, that’s where he recorded the Tennessee Transitions too. “I wanted to go to Memphis and record it in Sun Studios but I couldn’t even leave Sussex” – yes the pandemic put an end to his travel plans.
The country/americana vibe Mike brings to the Tennessee Transitions is quite the departure from the rocking sounds of Clovis 2. “That thing I was saying about music all being the same to me, well it’s how you deliver it, how you play it that makes it different” Mike says as he thinks about the solo arrangements and slide guitar which dominates his new record. “If you play a song on a resonator guitar, tuned to an open B it sounds like Lead Belly but if you play it with a five piece band and an organ and loads of backing singers and a distorted slide guitar it sounds like The Rolling Stones. If you clean it up and put some pedal steel in it might sound like Waylon Jennings.”

“Tennessee Transitions is just me sitting in a room with a few guitars and loads of different tunings, playing half of the songs from Clovis 1 and half of Clovis 2 arranged for solo slide guitar.” The record features eight reimagined songs from the Clovis duology along with a song off Ross’ record ‘Spin Drift’ and three covers which give a nod to a selection of his inspirations. He recorded this record live with two mics and couple of video cameras, the result is the most authentic version of Mike Ross – a record that captures his true self. Though Ross often begins writing a song with just an acoustic guitar and his vocals, the arrangements in Tennessee Transition are quite different from how he originally wrote them. The rawness helps to shine a light on these songwriting abilities. “Inspiration comes from the world around me, it’s very personal to me” Ross says as he begins to reflect on the meanings of some of these songs. “I find it hard to be the observer, I’m always in the story so it has to come from my own experiences – my feelings around people, places and things.” When it comes to writing, Ross often takes influence from Steve Earle who he has been on songwriting workshops with and his influence is clear in the Tennessee Transition collection and his advice to Ross to be authentic is something he remembers frequently with every project he embarks upon.

Ross found music as a way of connecting with people as he travelled around a lot as a young child thus finding it difficult to make friend. “I turned to music to help me connect but I had an internal battle between creativity and the conventional job my Dad wanted me to get.” Ross knows first hand the demons that internal, self-conflict can create and when he’s not busy releasing records he’s helping to pass on his knowledge to young people. “I’m a mental health practitioner who works with young musicians helping them overcome things like anxiety. If we’re in conflict with ourselves internally that’s where dependancies on other things come in for example alcohol, drugs, sex, gambling, shopping. It’s like saying, I want to do this but the world says I have to do that but if I do this other thing then I don’t care either way. It gets messy and thats what happened to me.” Whilst Ross has turned his life around and continues to impress with his raw talent, he wishes to nurture that within the next generation. “I’m qualified as a therapist so now I work in music education with 18-25 year olds and its usually the same problem – I’m too concerned about what other people think to have the confidence to be myself. That confidence comes from within, the courage to be fearless, so my aim is to encourage people so they don’t spend 25 years screwing themselves up before they come back to music.”

Mike Ross, just like many of us in England, is missing the live music scene but has plans to tour again in the near future. “I’m not in control on stage, my intention is to be myself so there are moments where I’m telling myself to really concentrate because this is the difficult bit coming up. Then there’s moments where I’m thinking what I’m having for my tea. The moments I like best are when something else kicks in and your feet don’t touch the floor, when I’m not worried about what comes next, you feel a bit removed.”
In the meantime Ross continues to write and record and there are plenty of projects to look forward to; “my drummer and I recorded another 25 songs. I revisited songs that I played with bands I was in in the 90’s, I polished them up and I’m recording them for an album called Origin Story. I like instrumentals as well, there was two on Clovis 2 and they were received quite well so I have two longer instrumentals that could go on a record” Ross contemplates. Whatever comes next for Mike Ross, you can be sure that it will pay homage to the greats that inspired his love of music in the first place and that whatever genre he chooses to experiment with next won’t define or confine the talented singer-songwriter and guitarist.