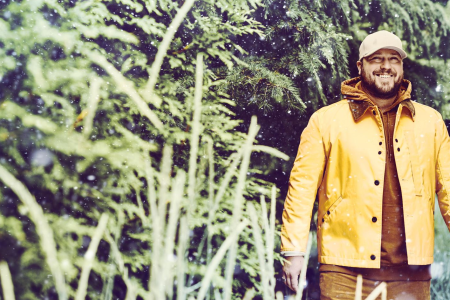 It’s fair to say that Mitchell Tenpenny is more than just a rising star of the genre now. Since he caught people’s attention in 2018 with his number one single ‘Drunk Me’, Tenpenny has consistently been releasing cleverly written, catchy singles. With a grit to his voice and a country-rock edge to his sound Tenpenny’s latest record, ‘Midtown Diaries’, Tenpenny is soon to be a household name.

The Tennessee native grew up surrounded by music, his Grandmother was Donna Hilley, a music publishing executive who worked tirelessly for the industry in Nashville. “My grandmother was a CEO of a publishing company when I was growing up. So I was always surrounded by songwriters.” Being surrounded by such talented writers obviously rubbed off and inspired a young Mitchell, “When I was probably eight years old, I met my first real songwriter and just fell in love with that, that there’s a person writing this song for someone else, they’re walking around town, you don’t know that that person wrote ‘He Stopped Loving Her Today’ or something. I thought that was so unique. I fell in love with it pretty early on.”

Just like for many songwriters in Nashville, Tenpenny was working hard behind the scenes before anyone knew his name. He found a core group of friends, fellow writers to work with and they wrote everyday, trying to get their songs heard. “I’m never writing for someone specifically. I’m just trying to write the best song possible” Tenpenny remarks. In 2016, he got his first big cut as a songwriter.

The Granger Smith song ‘If The Boot Fits’ was a top ten hit on the Country Airplay charts. Tenpenny wrote it with Andy Albert and Jordan Schmidt, the latter of which produced his new EP. “We just wrote a song that we all wanted to write.” Tenpenny reflects, “It was definitely a bit of a surprise. We love the song, we thought it was a fun song but none of us at the time, had any really big cuts. None of us have had a single on the radio. So we were just young writers trying to get in the room. One of our publishers sent it to Granger to just try to get a co-write with him. Granger heard it, his daughter loved Cinderella at the time and the song starts with ‘She’s just a small town Cinderella.’ So the stars just lined up. I remember getting the phone call that he was gonna cut the song and then the next week, we got the phone call that was gonna be a single and it changed all of our lives. I mean, it opened up doors for us. It came out of just writing a million songs, and one of them just happening to hit. That’s just how it happens most of the time. I got off the phone and just started crying!”

For Tenpenny, he draws inspiration from all over when it comes to his songwriting but finding that hook, that clever play on words is what drives him. “I love to people watch and I love to eavesdrop on conversations. My song ‘Alcohol You Later’ I heard a guy at the bar say I’ll call you later and I misheard him and heard alcohol you later. Sometimes I get ideas and then I draw from personal experiences. Sometimes I just make up a complete story because it’s fun.”

With his own artist career taking off, it’s still all about the song for Tenpenny who enjoys getting in the room with other artists and challenging himself to put himself in their shoes. “Sometimes you get put in a room with an artist and that artist wants you to write for them, that’s a little different, because then you’re asking ‘What do you not have on the record?’ We’ll just talk for the first 30 minutes and get to learn where their head is. Then you’re trying to write towards that. I find it way harder to write towards something than to just kind of go with the flow. I always want to write towards a hook.”

His latest EP ‘Midtown Diaries’ sees Tenpenny team up with the friends he grew up with in the industry which he says is special and holds more meaning. “There’s a million great songwriters all over that record. Matt Alderman and Thomas Archer, I love those guys, Jordan Schmidt, my producer who also wrote Boot Fits. We’ve written a lot of songs, getting a lot of success together, so it’s always fun to get in the room with him. He’s like, the best producer in town. I felt like I got him from the beginning and we became best friends. It’s a collection of a lot of my friends and what we learned the last few years hanging out together and growing up.”

He reflects upon his song ‘Truth About You’ which features on this record. “It’s just one of those days, Thomas Archer and Matt Alderman were in the room. Matt just started talking and trying to come up with ideas, I don’t remember what he said, something about don’t lie or I won’t tell the truth, something weird like that. As I started playing guitar, we worked it out. When we got the hook, I knew exactly how to write that song, what to say for the verses. We knocked that song out in about an hour or less. It was just one of those days where it just fell right and I love that song, I love the concept. I feel like everyone’s been there where you break up and the opposite side wants to tell the better story. I’m not saying I haven’t been there either, on both sides as part of growing up, and that’s why I wanted to get that song out to the world.”

A play on words

His quest to find that clever line or that play on words has lead Tenpenny and his friends to write some funny songs that Tenpenny says will never see the light of day! “I wrote a song called Chavro Let Me See You Tonight, like a play on the word Chevrolet, it was dumb and there was one called ‘At Her All Night Long’ but like ‘Adderall Night Long’ because Adderall would keep you awake. It was not a good song!”

Putting together this new record, has allowed Tenpenny to reflect upon his career so far, to evaluate what he’s achieved and what he’d like to achieve. “Having a number one song was incredible, because it did change our lives, to be able to do things that I’ve always dreamed of doing, playing these major festivals on main stages and seeing crowds of 50,000 plus people that’s why you pick up a guitar as a kid. So, that’s probably my most proudest achievement. It’s a very hard industry and all I want to do is what I’ve been blessed enough to do for a career right now. So whatever I got to do to continue to play music the rest of my life, that feels like my goal.”

As 2021 draws to a close, he prepares to take this record on tour as he opens for Chris Young who he wrote ‘End of a Bar’ with, headlines The Ryman Auditorium and embarks on a tour of his own. “I try to be completely focused on stage, because if my mind wanders, I forget lyrics so fast. You’d think it’d be second nature by now even like our biggest songs, I’ll forget lyrics to if I don’t completely focus. Sometimes you can’t help it, you see someone in the crowd then you start thinking of all this stuff, or maybe a fight will breakout or something nuts, and then you’re worried about that. I’m so ADD, if I’m reading a book, I’ll hear a word or see a word, and then I’ll go completely off, I’ll be 10 pages down and not even know what I read. It’s kind of like that on stage.”

Tenpenny was on his way to the UK when covid hit and promises his fans here that he shall be back as soon as possible. We can’t wait to hear this wonderful record live in England!