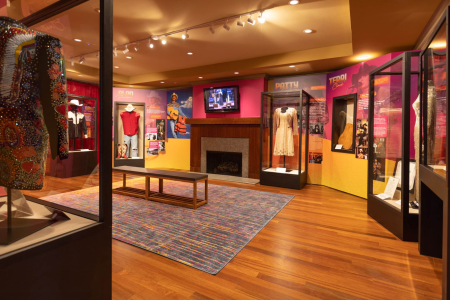 If you come to the Grand Ole Opry in Nashville, TN this year you’ll definitely want to include the backstage tour package to your visit to take in “Opry Loves the 90’s.” This new exhibit features the songwriters, songs and artists that create the 1990’s Country Music sound. Dominate artists include Trisha Yearwood, Marty Stuart, Garth Brooks, Martina McBride, Reba McEntire, Alan Jackson, Travis Tritt, Terri Clark and Alan Jackson.

See stage wear and artifacts from these Opry members most memorable performances. Some of the clothing and exhibits are in enclosed glass cases whilst others are in frames and displayed on walls. More than just a visual museum the “Opry Loves the 90’s” is an interactive experience with a gaming console to test your knowledge of 90’s country music trivia, photo opportunities and memorable riffs and songs from the 90’s.

To enhance this experience 90’s Country music and artists will be featured in each Opry performance on stage for the rest of this year. Each Friday the Opry is hosting “90’s Country Plaza Parties” on Fridays and Saturdays through September 5th and returning through October to celebrate the 97th Anniversary of the Opry.  The synergy continues as WSM Radio, Opry.com and Circle Network join in the Opry Loves the 90’s experience.

Country music artists scheduled to perform for the Opry Country Classics shows include Steve Wariner, Rhonda Vincent, Jeannie Seely, Maggie Rose, Lorrie Morgan, Vince Gill, Craig Morgan, Del McCoury Band and Trace Adkins to name a few.  90’s Country music was a turning point in country music that continues to resonant with new Country Music artists today and will for decades to come.  Whether they are on tour or releasing new songs and albums Country Music Stars from that era continue to sell out shows and having the highest sales and listenership in the genre of Country music today. “Opry Loves the 90’s” runs through December 31st of this year so book your tickets early to see the exhibit in person at the Grand Ole Opry.

Augment the experience with Opry Plaza Parties, Opry.com, WSM Radio and Circle Network. You can also follow the Opry, it’s outlets and the artists on Social Media to keep up with everything going on this year and to celebrate the 97th Opry Anniversary. No trip to Nashville, TN is complete without making the Opry experience part of that visit. “Opry Loves the 90’s” just provides another reason featuring your favorite artists, songs and performances. Celebrate the music, artists and the Opry every chance you get.