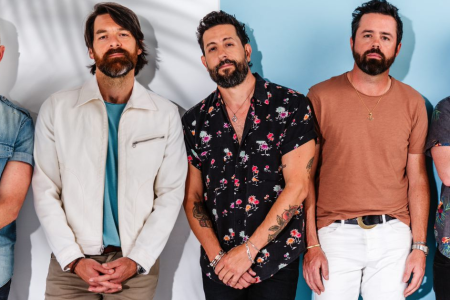 Old Dominion are one of the biggest bands in country music, their previous two albums topped the country albums chart whilst seven of their singles topped the country airplay charts. The band, made up of Brad Tursi, Trevor Rosen, Geoff Sprung, Whit Sellers and Matthew Ramsey are gearing up to release their fourth studio album, ‘Time, Tequila & Therapy’ and are embarking on an energetic tour across the States. Matthew Ramsey took time out of his day to share the secrets behind the bands illustrious career so far and tell us some of the stories behind the songs on this new record.

Matthew Ramsey, the groups frontman, has always known that music was the path he wanted to take, from listening to his father’s records to watching his Uncle perform, it was all inspiration that Ramsey soaked up! “My dad was a huge fan of all music. He just loved country, rock, R&B – he loved everything. He had a record collection, and he would pull a record out and play one song off it, maybe like Waylon Jennings, and then he would put it back. Then he pulled another one out, it might be Smokey Robinson – it was just kind of all over the map. Then there was a radio in the kitchen, there still is a radio, that was always playing country music.” Ramsey reminisced, “When I was a young kid, I was probably nine or 10. I saw my brother’s friend play the drums and I was just very affected by that. Then my uncle played guitar and I was extremely drawn to him and what he was doing, that was really inspiring to me. I saw my first concert, which was Huey Lewis and the News – I knew that I had to do something in music.”

The group met up in Nashville, four of the five boys had connections to Virginia, so the name part was easy since the group share their name with the State’s nickname. Their purpose was to jam together and write songs for other artists but along the way their success spiralled and the band found themselves playing shows, covering the hit songs they’d actually written. “For a while there, that was the whole reason that we moved to Nashville, we wanted to be songwriters.” Ramsey says, “So we worked for a really long time, just to be successful songwriters, we didn’t have stars in our eyes to be successful artists.” Ramsey recalls the first time they wrote together, “We knew each other for such a long time, and we were friends for such a long time. So the first time that we began playing together, it was already familiar, we weren’t strangers, we were already friends and we knew each other’s sensibilities. I think the first thing we ever really created together, all five of us was a song called Break Up With Him. That was sort of a different moment for us because we had played music together for quite a while, but to be able to create together from the ground up like that gave us all an extra little buzz.”

Save It For A Rainy Day

Ramsey reflects upon the songs he’s written that other artists have chosen to put out into the world, “We’re still very proud and honoured when another artist picks our song. I would say, Save It For A Rainy Day, a song that Brad and I wrote for Kenny Chesney, is the one I’m most proud of. That song has taken us on a pretty epic journey and is always going to be special.” The friends are not formulaic in their approach to songwriting. After knowing each other so long, they are like brothers and feed off, and thrive on each others ideas. “A lot of times, it does start that way, from a title idea but it’s different every time. As a songwriter, we’ve always got our radar open for it, so you’re always listening to conversations, or whatever is happening in your life at the moment and writing down every idea. When you get together, you start just brainstorming and spitballing those ideas. Sometimes your title will remind someone of a piece of music that they’ve been working on or they’ll be playing the guitar and whatever they’re playing makes you remember a title that you had. So it can happen in all manner of different ways.” Ramsey enthuses as he reflects upon their past hits.

The band first made the breakthrough with their second single Break Up With Him. All five members of the band wrote the song together and it was produced by their good friend Shane McAnally – a formidable songwriter and producer within the country genre. It topped the country airplay charts in 2015 and they backed this up with the release of the quirky Snapback a song that really defined the band’s direction. It’s snappy, clever lyrics and production which framed them became instantly recognisable as Old Dominion’s sound. “Snapback has to be the strangest song we’ve ever written, it was a hit but it was centred around a hat!” Ramsey laughs.

The band has gone from strength to strength with the likes of Shane McAnally, Josh Osborne and Matt Jenkins to call upon for writing sessions and production assistance. Elaborating on those collaborations Ramsey said, “All three of those writers have been a part of our careers since the beginning. We were all friends together, Shane, Josh, and Matt, before any of us had any success, we were all just broke songwriters trying to make it in Nashville. We found each other and we realised we all wrote really well together. That’s Nashville for you, right? Just one person has some success and the rest step up with that person, and we all sort of rose through the ranks together. So we were very fortunate that those guys will set aside time for us at this point. Because they can be doing any number of things but I think, because we consider them family, they’re a part of this journey just as much as anyone else.”

The three of them were heavily involved with this latest record. Matt Jenkins co-wrote the penultimate song on the album with the band, the vivid and impactful, Don’t Forget Me. “That was one that we started writing that morning. I can’t remember who had the the idea of the title, but once a title like that gets thrown out, it’s kind of jarring and everyone stops and goes, ‘what could that mean? How do we write a song that gives that title?’ Then we just start painting a picture really, it’s a very magical thing that happens in a room full of writers that are in tune with each other and that song, it just becomes such a fast moving train that all of the ideas start flowing and flowing and you suddenly realise you’re painting a picture. I think with that song in particular, it creates so much imagery that it does feel like we were painting that day.”

Their first single off the album is I Was On A Boat That Day, which is still climbing up the Billboard charts. Ramsey recalls the journey that song has been on, “The title for that song I Was On A Boat That Day has been around since we were writing Break Up With Him. We’ve kind of joked about writing that song, we started writing it and it was a different vibe, and a different direction entirely. But we did have that idea and just never finished it. It just got kicked around in writing sessions here and there throughout the years but we never did latch onto it. Once we were in Asheville, Brad brought it up again and it just seemed to be the right moment, for whatever reason. You never know when it’s gonna stick, and it’s worth hanging onto a good idea. So we held on to that one for quite a number of years and it finally stuck. It came out relatively fast after we decided to write it that day.”

The record features a very exciting cross-genre collaboration; the band are joined by Gladys Knight for the song Lonely Side of Town. “It was meant to be I think, because we were making this album in Asheville, North Carolina. As we were listening to that song, after we had recorded it, it just was kind of begging for some sort of collaboration with a singer that was, maybe not in the country genre. We were talking about who would be great for it and Gladys Knight was mentioned. Then we realised that she actually lived in Asheville, North Carolina, somebody said, ‘she lives right down the road from us, where we’re recording right now.’ So we asked the studio people if they knew her, and the studio manager was like, ‘Yeah, we’re really good friends, I’ll call her.’ She immediately said yes, we were shocked that she said yes so fast. It just kind of happened so easily, like, all we had to do was ask!” Ramsey exclaimed.

Ramsey ponders on his own favourites and hidden gems on the record, “It’s so hard to pick a favourite, but I do really love No Hard Feelings. I just love the sentiment there. We took the title of the album from that song but everyone in the band has a different favourite, so that’s the beauty of it.” Ramsey says, a smile audible in his voice.

As the band near the release of their fourth album, the three time CMA Vocal Group of the Year, are out on the road, lighting up the stage night after night for their fans. They’ve achieved so much as both songwriters and artists, they’re true entertainers and there is so much more to come from the boys. The group of friends very rarely have time to look back and evaluate their success but from time to time the enormity of their career becomes impossible for the boys to ignore. “We don’t talk about it a whole lot. I think if we do, it’s because while we’re out here on the road, someone will have a moment, where you just kind of look around and go, ‘Can you believe this is our life right now?’ It sort of forces everyone to sit down and think, we’re very fortunate. Then we have lots of these barricades made up that we use to fence off the area around our bus, and they’re covered with pictures that we’ve taken throughout the years. So everyday we walk down memory lane of what we’ve been doing for the past 10 years. So that’s a pretty cool way to take a glance at what we’ve achieved. There’s no one moment for us, it’s just, every show, we’re grateful for every bit of recognition.”

The band are not resting on their laurels as, before fans have even had a chance to listen to ‘Time, Tequila & Therapy,’ they’re already thinking about the next one! “We’re actually working on the next one already. So we are on tour right now, as long as things keep heading in the right direction, we don’t have to get shut down again. We’re going to keep on touring and we’re already talking about going into the studio to work on the next one. The way people consume music these days they want more, fast, so we’re gonna try and give it to them.”