One to watch: Kaitlyn Baker 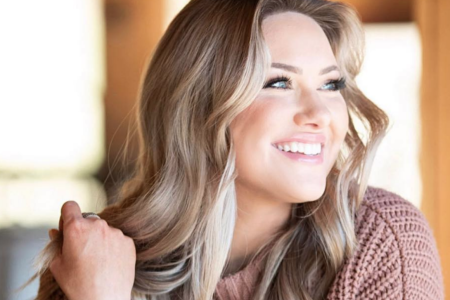 Kaitlyn Baker became a fan favourite amongst the UK country community after her performance at this year’s Country 2 Country festival. Not only did the crowd love Baker, she loved them back, so much so that she is returning to these shores this summer!

I grew up singing in church when I was a kid. Then I would say, probably about the time that I was 15, I started to realise like, holy cow, this is something that I can see myself doing, forever. I started travelling back and forth to Nashville, frequently started recording, and it just took off from there. One thing led to another and here I am!

What did your parents play to you on long car journeys and what are you choosing to listen to now?

When it comes to your own songwriting, do you like to start from a particular point each time or is the process different every time?

It’s different every time. I’ll often start with a melody, just get in the groove, in a vibe of how I’m feeling and then I just go from there. But it just varies really with each writing session.

Who are your favourite writers to work with?

My husband and I write a lot together, especially some of the newer things that I’ve put out. He’s a writer in Nashville at Warner Chappell. With the extended time at home during the lockdowns, we had a lot of time to work on things. We really, really understand one another, but there’s so many talented writers in Nashville, I’ve written with a lot of great writers.

How do you separate your work lives and your personal lives?

We have a farm. So we are really busy with just maintaining our 30 animals that we have. It gives us a break and a reset from all the music stuff. Even though we work a lot together, we work well together. It’s good to have that separation away from business talk.

One of the very first songs that I ever wrote when I was 11 it was about the luck that I was having, I was having terrible luck and I remember it was called ‘Just My Luck’. It was talking about random stuff like when you get your toothpaste out and you have none left, the random things an 11 year old would talk about, it’s not a great song. I’m like, thank goodness I have progressed at this point in my career.

What do you like most about coming to England?

The country music fans, it blows me away! I was here in 2020 and to see the reaction that people have towards country music made me realise, I have to be here, I have to be around these kind of people. I’m from Nashville, not originally, but I live there now and there’s so many incredible artists and songwriters, because you’re absorbed in that all the time. And everybody loves it. But there’s just a different energy here, it’s refreshing as an artist and a songwriter to see people so passionate about music.

I was included in the ACM award pack, which was sold nationwide through Walmart. It was with artists like Brad Paisley, Blake Shelton, Miranda Lambert, and some other newcomers at the time. But I was included, so that was a pretty big deal for me. I performed in Colorado at this huge festival called Country Jam, and spontaneously opened the show for Brad Paisley, which was a really big deal. So there’s been a lot of really great highlights in my career, but there’s still many things that I wish to achieve and being at the Opry is something that I strive to be able to do at some point in my life. That’s a bucket list thing for me.

Can you tell me about some new projects you’re working on?

We have new singles that will be coming out over the next couple of months, hopefully an EP. We’re also coming back to the UK in August, which is really exciting and we’re touring round the States too so it’s going to be busy.