One to Watch: Kameron Marlowe 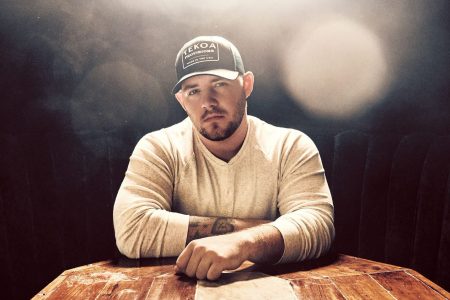 I would say probably around 12 or 13 years old. I started singing in the church and knew that I loved to sing. Then I went into high school and around 15 or 16, I started a band and really just started loving music and just fell in love with the art of actually playing live shows. So I think that was when it all kind of fell into place for me.

On long car journeys what did your parents play to you? And what are you choosing to listen to now?

A lot of 90s country, a lot of 70s and 80s country as well, Aerosmith and early 80s to 90s rock and Pearl Jam. My music taste is all over the place; I listened to a lot of blues on my own, my family weren’t big blues fans, but I really locked in on it and love that. Now, I listen to a little bit of everything. I try and immerse myself in as much music as I possibly can and just take it for what it is – I try to see other people’s artistry.

You started your career on The Voice, what was that experience like for you and how has it shaped you as a musician?

I had a blast on the voice – I didn’t really make it far – but I just enjoyed being around so many artists and so many songwriters. I fell in love with songwriting while I was out there and realised that that’s what I wanted to do, and I realised that I had to be in Nashville to do that. So I met some friends that were on the show that are from Nashville, and I started coming in and out of town and hanging out with them and writing songs with them and learning the process. I guess that’s kind of how I got into Nashville. I love the voice so much and I love that I got a chance to be a part of it.

You spoke there about the songwriting process, and I wondered how it works for you? Do you always write with other people? Does it always start with a lyric or melody or is it just different every time?

It’s different every time. I like to write by myself, that’s when I can be the most vulnerable in a room. There are certain writers that I can be very vulnerable with too, but other writers I choose to back off a little bit and keep some lyrics for myself in a way but I do enjoy co-writing; I think co-writing is a really special thing, especially in Nashville.

Who are your favourite co-writers to work with?

I have a long list! I love writing with Dan Isbell, Jessi Alexander, Shane McAnally, Jonathan Singleton, Casey Beathard… there’s so many!

Can you tell me about the story behind Tequila Talkin’?

I wrote that with Dan Isbell who was on my list of favourite writers! We came into the session and I had this idea for Tequila Talkin’. I knew it was an old Lonestar song, but I wanted to just rewrite the title; it had been so long, since that title had been written. So, we sat down, and we wrote towards it. We got the first verse and chorus done and we just needed a second verse and a bridge. Me and Dan called it quits on the first day and we returned to it with Ray Fulcher, who is another one of my absolute favourite writers in town. He came in and helped us write the bridge and the second verse, and it turned out to be the song that we have now. I love it so much, and I hope other people are liking it.

You’ve just released your debut EP, what was that experience like for you, getting into the studio and recording these songs?

Some of these songs are recorded before I even had a plan to release an EP, and some of them were recorded after. I think the coolest part of making that EP was seeing how I had grown from going into the studio when I didn’t really know what I was doing, to now, still not knowing fully what I’m doing but having a little bit more of an idea. Figuring out the process and working with the producers and just basically learning, trying to take away as much as I can from their knowledge.

On stage are you completely focused or do you let your mind wander? What are your mid-gig thoughts?

I didn’t think anybody knew about that haha, I definitely get some big thoughts when I’m on stage, completely unrelated to the music!

If you were to describe yourself as a flavour of Potato Chip, what flavour would you be?

I think I’d be old trusty original! I’m nothing special, I just love the originals.

If they were to make a movie of your life, what songs would you include on the soundtrack?

I would say Giving You Up has to be on there, because that was a real life thing, I wrote that from a real experience. Another song I’d like to include is Steady Heart which has not been released yet, but I’ll be bringing that out soon. Then a song that isn’t my own… let’s go with Pride and Joy by Stevie Ray Vaughan, I love that song, I think that that would be a cool song in the movie.

What would you say has been your proudest moment in your career so far? And what would you like to go on to achieve?

I think the proudest moment so far was getting picked to play this tour with Brad Paisley. Being able to go out with one of my absolute heroes and legends of country music is a really cool thing to do. I get to go home and play my hometown amphitheater, which I’ve literally dreamed of playing my whole life – that’s going to be a really cool moment for me. I’d like to one day, sell out some stadiums – that’s the goal, that’s what I’m aiming for, so we’ll just see if we can get there but that’s the dream that we’re chasing.