One to Watch: Lily Rose 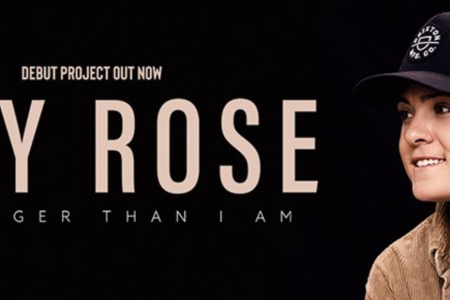 I wonder if you could tell me when you first knew that you wanted to be a musician?

When I was nine years old, my parents took me to see Bruce Springsteen for my first concert. I fell in love with just the energy of what he does on stage and what he does for crowds. Shortly after that, I immediately was dying to play the drums, so when I was 10 years old, my dad finally took the leap and was like, “Sure kid, here’s a drum kit.” It snowballed from there, picking up the guitar, writing songs, singing, picking up piano. So I guess it all probably stemmed from that Bruce Springsteen concert.

You mention Bruce Springsteen being an early influence there but what did your parents play to you on long car journeys and what are you choosing to listen to now?

That’s a huge, huge part of where I am today. My parents weren’t musicians by any means but they’re music lovers. Both my parents have worked in radio, my dad’s still in radio. They liked the Beach Boys, The Beatles, Stevie Wonder, Bruce, Top 40 stuff, early John Mayer, Maroon Five. That was just non stop in our house and the car all the time. From a very early age, I just always had a bond with both of my parents, especially my dad, just through liking the same music.

When it comes to your own songwriting, do you always like to start from the same point, like a lyric or a melody or is it just different every time?

I’ve been writing songs for almost 14 years now, so it’s definitely evolved. Where I’m at in my career right now – and I think most country, songwriters would say this – is what’s the best concept we can write that day? If we can find that really special concept, that we can either have a really cool flip on the hook or whatever it is, then we pull inspiration from being in love or a breakup, but it all really starts with the concept for me.

Your song Villain is absolutely fantastic, I can’t get enough of it but how did that first come about? When you wrote it did you know you had a hit on your hands?

We wrote it in 2019. I’d had the title in my phone for about a year because I’d gone through a breakup, the story is told in the song. When we wrote the song that day, my male co-writer Kyle Clark said “I’m going to sing the demo, so we can pitch it for like male artists”. We were kind of like, okay cool, I had nothing going on, my other co-writer Mackenzie had nothing going on. As I sat with the song, I was like, I just love this, I can’t stop singing it. So I put a work tape down eventually with my producer Matt Morrissey. We cut it, had the whole thing mastered and ready to go from like February of 2020. That’s how long we held on to it. I thought the song was special but I had no idea it was a hit. I knew we had something really different sonically and the lyrics were really relatable, but I had no idea that it had the potential to be a massive hit, which was a very pleasant surprise.

I really liked the video as well, it has a cool twist to it at the end, how much say did you have over the planning of that video?

I just signed a record deal, so it wasn’t facilitated through Big Loud, it was outsourced. So, I actually had a lot more involvement than I do now. Ben Skipworth, who directed it, is a great buddy of mine, but we met because of that video. In hindsight, I wish we could have made it a little bit easier to digest. There are a lot of people that don’t understand the cool twist but I had a blast shooting it. That was my first go at any kind of acting, so I’d love to keep doing stuff like that.

You just brought out ‘Stronger Than I Am,’ your first collection of songs, tell me about some of the people you worked with on that record.

Those seven songs are just really special. I think that the main theme when I look at that collection of stories is the thing that started it all which was relatability. They connected with Villain, because it was touching a nerve that was so relatable, that country music hadn’t sang about in a long time. The other six songs on there… You can relate with your hometown, you can relate with the breakup, you can relate with falling in love – they’re just really special to me. Joey Moi, what he’s done sonically, with the help of Matt Morrissey and a couple other co producers, it feels like a unit. I feel like no song sounds the same though. The best songwriters in Nashville are all over that project, I’m super humbled to write with some of them, but also to get some of their outside songs, to get an outside song from Sam Hunt is a dream come true.

You’ve been open about your sexuality from the start of your career. You have become an idol and a role model to so many because of your wonderful music but also because of that honesty. In songs such as ‘Remind Me Of You’ you subtly address that with the pro-nouns you use, how important was that for you?

It’s a heavy thing, but I am really honoured to be able to carry that flag you know, literally and figuratively. In my opinion, you already said it, it starts with the songs, you can have the pedestal but it’s really all about the songs and ‘Remind Me Of You’ was the first outside song I ever cut. That was already pushing boundaries for me as a songwriter and an artist but I’m really lucky to be on the label Big Loud Republic that they didn’t bat an eye at the pronouns. They were like, we signed you because of your authenticity and I chose them because I knew they’d take care of my authenticity. I’ve been ‘out’ for a long time and I’m very very proud of it and it’s been really cool to see that song has shined very, very bright because of the subtle evolution that we’re doing in country music.

A few silly questions for you now, what’s the strangest thing you’ve written a song about?

The first thing that pops into my mind is a song called breakfast and the hook was about hanging out with a girl, you meet her at the bar and you ask ‘How do you like your eggs because I want to cook you breakfast,’ like I want you to stay over kind of thing so that was a funny day.

If you were to describe your personality as a flavour of potato chip, what flavour would you be?

Oh my gosh, I’ve never had this question before. I am going to go with just a classic ruffles chip. It’s a classic party chip, and I sure love to party. I also feel like it goes really well with everything. I feel like I’ve got a personality that I just get along with a lot of people and can be a little rough around the edges.

Finally, what’s next for you?

I’m riding the high of this release, we sat at number one on the country albums chart on iTunes for three days above three of my favourite artists ever, Morgan, Taylor and Kacey, which was a pretty humbling. We’ve got the Chris lane tour coming up in 2022. So we’re just going to put out more music and play more shows.