One to watch: TJ Walker 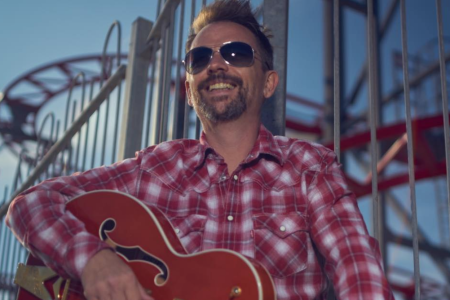 It was a pleasure to catch up with TJ Walker for the September/October issue of Maverick Magazine.

I wondered if you could tell me when you first knew that you wanted to be a musician?

My dad plays, he doesn’t so much now but he played banjo and guitar in a trad jazz band. I used to go and see him perform when I was really tiny. I actually started when I was four. He got me a little ukulele banjo, and I pestered him to show me. He’d write the songs out that I knew with little chord shapes, and I’d sit there playing them over and over the first day he gave it to me. I went and woke him up about eight o’clock in the morning on a Sunday morning to show him I knew all the chords, he’d shown me. I moved on to guitar when I was about seven. Then when I was about 11, or 12, I got my first electric guitar after pestering my dad to get one. So I’ve always wanted to do it.

What did your family play to you growing up?

So because he was playing trad jazz, I was listening to a lot of that when I was growing up. I guess the first stuff that he played to me at home was The Beatles. One of the most influential things that sparked my interest, was my granddad. He was a teacher, when he retired, he ran a British Legion club. There was Man’s Brown Ale, which comes in these bottles and there was some offer, where if you collected either the labels or the tops and sent them off, you could get these cassettes that had four sides of 50s, 60s, 70s, and 80s. They were really good compilations. I remember the 70s side in particular, that was a big influence because it had loads of really good pop rock songs. I think the thing that got me into country music was, in Woolworths you used to get these big baskets of tapes that were always on offer. My dad bought a Glen Campbell one. This picture on the front, the man with a beard and a check shirt and a blazer – looked a bit like a geography teacher. When he first put that on, me and my sister was listening to it going, what is this music? After a few times, we thought, actually, this is really good.

When it comes to your own music, where do you draw inspiration from lyrically?

I’m constantly taking notes of things that I hear, it could be on the telly, or I hear somebody say it or I’m listening to a podcast or reading a book and I just make notes. I used to do it in a notebook, it’s all on my phone now. I’ve just got pages and pages of them. When I’m sitting down to write, if I get stuck, I’ll read through them. I was listening to a podcast and John Mayer was being interviewed on there. He was talking about his latest album and he was a bit upset, I don’t think it’d be as well received as he thought. And he was sort of talking about it having come and gone, I thought, well, that’s a good title for a song, it’s come and gone. So, from that I then started writing a song.

Do you remember the first song you ever wrote?

I did write one when I did GCSE music to write. I was really into Meridian at the time actually, so I was writing these lyrics with big words that I probably didn’t understand. I’d get the thesaurus out! The teacher who was head of music was called Miss Haynes. Basically, the title of the song was ‘Up Yours, Miss Haynes’ spelt backwards. I handed it in to my music teacher who read it and marked it, then of course, when it got handed to her to sort of double check, she immediately spotted her name, that I’d been rude about her. And I remember the other music teachers trying to tell me off, but they couldn’t stop laughing.

Can you tell me the story behind your single ‘With And Without You’ please?

I wrote it a few years ago. It was a time of, really working hard on my songwriting, and I joined Nashville Songwriters Association. They do this thing where they evaluate songs for you. The person that I sent this one to, he or she, really liked it and was offering me advice on it and it really helped me refine it. It came from a twist, the twist is the U2 song, ‘With Or Without You’, and I thought, well, it’s an interesting story to say, I’ve got to live with and without you. I guess it’s the idea of you can be with someone but still be lonely. I extended that even further that you’re with someone who doesn’t like to be stuck in one place. So they’re always clearing off. There are some lyrics that I’m quite pleased with in that song. ‘People must think you’re my imaginary friend’. I’m not sure where the initial spark of the idea came from.

I’ve been involved with this musical, it’s only being showcased but it’s based around country and Americana music, it’s called ‘Thank God for Nashville’. Two of my songs are currently in it, one of them is ‘With And Without You’ and there’s another one that’s on the album, which is called ‘If I Still Had You’. We did a showcase at the Green Note in Camden back in May, and we’re going to be doing some more of those. Some of the other songs have been written by Stuart Brayson, who’s done musicals with Tim Rice as well. It wasn’t something that I’d ever thought of doing, but I was asked if I’d contribute and it’s been a really good process – totally out of my comfort zone. I wasn’t acting, but I was playing a character and there were 50 people in the Green Note, it was really intimate and quite intimidating. We’re going to be doing some more showcases for that and that’s on the 31st of October. That’s around the time that the album’s coming out. I’m hoping to get some live dates around that time.