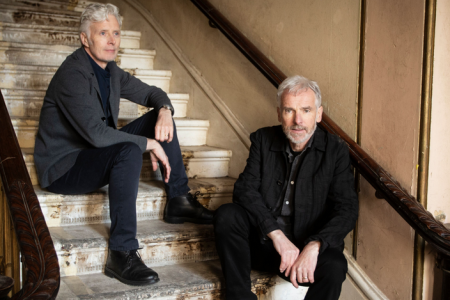 The County Affair have shared their video for their debut single ‘Every Ghost’.

The duo recorded ‘Every Ghost’ at the infamous Abbey Road Studios, led by producer Tom Nichols who captured their vision and influence from the likes of Dave Alvin, Steve Earle, and Joe Ely. 40 years of friendship founded on a shared love of music has paved the way for The County Affair’s distinctive sound with a strong Americana band feel and powerful storytelling.

‘Every Ghost’ is a song of acceptance and taking the time to understand another person’s story. After hearing the experiences of several homeless men a few years ago, Kevin began to notice a common thread. People too often assume homelessness to be the result of poor choices. Often, what this assumption overlooks are the life-changing events that can cause a person’s world to collapse entirely. ‘Every Ghost’ humanises the story of the stranger sleeping in a doorway, and calls for us to stop, ask and have empathy rather than drawing our own conclusions.

Childhood best friends Kevin Brennanand Tony Reganmet in Nottingham in the 70s. Travelling together on the same school bus each day, they talked endlessly about music and the ‘country rock’ and ‘outlaw country’ sounds that were emerging from the US at the time. As teenagers they joined The Moonshiners, an Irish country band led by Kevin’s father, and were playing up to three gigs each weekend.

Before long they had started their own band, The Rambling Boys and took to the road, but the band parted ways as Kevin and Tony left to study at different universities. Their friendship endured however and a couple of years later, they found themselves –separately –on the east coast of the US. They seized an opportunity to play for a new crowd in Houston and zig-zagged across the States. They were approached to sign to management and go pro, but with post-graduate jobs waiting for both of them in the UK, it was time to go home.

30 years later, married with families and successful careers under their belts, the duo are picking up where they left off. Kevin had been penning his own songs for the last several years. He would send these onto Tony, who tweaked the vocal and lyrical arrangements, adding in chords here and there… and just like that, The County Affair was born.

Things are just getting started for The County Affair, and with a highly anticipated album due for release later this year, they’re raring to go with their next adventure.