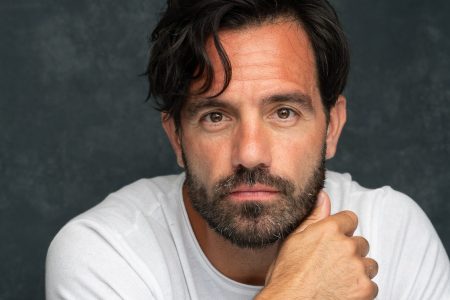 Iranian-Canadian actor Ramin Karimloo recently left our TV screens as he departed hospital drama, Holby to return to the stage. Though he makes a living performing in the West End and on Broadway he has always had a passion for bluegrass and country music, growing up on the greats. Tomorrow (December 15th) Karimloo will perform a one off show with his Broadgrass band as these two world’s collide and it could possibly be the last time we will see him perform live in this capacity for a while.

Karimloo grew up surrounded by music, a surprising eclectic collection of records infiltrated the Karimloo household. “Music was always around the house and it wasn’t musical theatre. It was old records of Kenny Rogers, Johnny Cash, Joe Cocker, Tracy Chapman. I vividly remember hearing those kinds of voices, which are so unique and distinctive, you felt there’s almost a history to their voices. That drew me into the story,” Karimloo reflects. His family were creative and nurtured and encouraged his talent too. “My dad and both my brothers are good artists, they both can paint and draw. My younger brother, he’s definitely pursuing that world of things. My older brother is a police officer so he’s the real hero of the family. My dad used to sing around the house, and he does have a good voice. I don’t consider myself a singer, it’s just part of the roles I do.”

Perhaps one of the most notable roles Karimloo has held is the Phantom of the Opera. He has played both leading males in the Andrew Lloyd Webber musical that has just celebrated it’s 35th anniversary in the West End and this was the musical that first peaked Karimloo’s interest in acting. “I went to see Phantom, purely because it was a day off school. Our Phantom was the greatest Phantom and greatest Valjean, though I didn’t know at the time, Colm Wilkinson, and his voice was so unique. I remember thinking, how it drew me into the story. From then I thought, maybe I’d like to play the Phantom.”
Most recently, he has returned from Tokyo after a stint of shows playing Judas in Jesus Christ Superstar. “Playing Judas was one of those challenges where, I was going over on the plane thinking, I wonder if I can actually do this. I liked that feeling of, I could fail – that’s exciting. I felt like a rock star in that, it’s such a passionate role.”

Though his singing voice has captured the hearts of fans around the world, it was acting that Karimloo was really passionate about. “Phantom was so transformative, I thought that’s what I wanted to do, it never dawned on me about being a singer. I wanted to act the Phantom and the singing was just a byproduct.” That being said, his show at the Eventim Apollo in London is a chance for Karimloo to step out from behind the mask and share his musical passions and influences with his loyal, global followers. From the fiddle Georgina plays in the intro of ‘Music of the Night’ to their rendition of Dolly Parton’s ‘I Will Always Love You’ which features on Karimloo’s ‘From Now On’ album, the band fuse american roots and country with Karimloo’s flawless tenor voice to create a sound unlike any other. “We do pay homage to my career, because I know, that’s how I met this audience. We deliver the songs in a way that suits more my musical passion. So we’ll still do a song from Les Mis but we’re doing it with my Broadgrass band. We don’t want to change the drama that the writer intended. But we give it our own sound because we’re not an orchestra, we don’t pretend to be. So when I write music, I have to think now, how would this fit my show?”

As well as their own material and some musical numbers from the shows Karimloo has starred in, the Broadgrass band play a wide range of covers in their own unique style. “We cover so much, our setlist is so eclectic. I’ve always said, on paper, the setlist should be a disaster – how do you go from ‘Bring Him Home’ into a Johnny Cash song? The audience is the glue that puts all that together, because it’s their spirit that we play towards.”

From his roles in musical theatre, to TV and his own shows, Karimloo’s mindset changes slightly for the role he is portraying. As he performs with the Broadgrass band his nerves creep in slightly. “I’m used to it now but I do still get scared. We’ve got to deliver, we have to make sure we’re not the same show as yesterday. When we do a tour we never do the same set twice, it’s different every night. When I’m in an audience, what I look for from a band is, I want to see them having the best time because then I have a good time. I want them to give me their artistry. So that’s our first rule.”

Karimloo is beginning to put all his theatre experience to good use as he begins to write his own show. “I don’t know whether I’ll compose it because, I have ideas, but I don’t think I’m that good of a musician to compose it myself but I know great people. I also believe that too many cooks can spoil the broth. So we’ll see how much I actually contribute to that. With their expertise, and maybe some of my suggestions, we can put something beautiful together. I don’t want to take the role of being a producer lightly as well, because it is hard work. It’s not about just putting your name to it, I want to make sure I offer a bit of manual labor, as one would say, especially if it’s a passion project.”

In the meantime Karimloo has developed a clothing line called 8x and will star in Funny Girl on Broadway next year. He has also developed his own app which he hopes to share lots of content on in the new year. “I think after this concert, I won’t be doing live shows anymore. So what I do with my band and musicians we will put up on there as well as some webisodes I’ve created.”

You can buy tickets to tomorrow nights show HERE and download the app HERE!