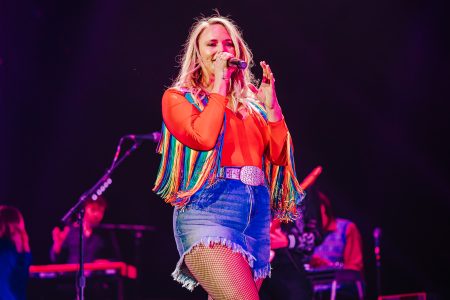 Miranda Lambert returns with her ninth studio album ‘Palomino’ following on from being crowned ACM Entertainer of the Year earlier this year. The album takes both Miranda and her listeners on a journey from start to finish. Ironically written in lockdown on her Tennessee farm, Lambert draws influence from being out on the road.

Opening up with ‘Actin Up’ Lambert continues with the wild and free persona she has created for herself in her previous couple of albums. The stutter in the chorus acts as another hook that gets stuck in your head long after the song has finished playing. Lyrically it’s strong as well, relying heavily on rhyme and rhythm, leaving each phrase to linger whilst the production, centred around a bass, is unique.

There are a number of familiar songs on the record as songs that we first heard in a stripped-back, campfire session on ‘The Marfa Tapes’ last year, graduate to a full band, polished studio production. It’s great to hear the journey songs such as ‘In His Arms’ and ‘Geraldene’ have been on from their first conception to the studio. ‘In His Arms’, built on it’s acoustic foundation is wrapped in electric guitars and steel.

The album boasts some of Lambert’s best songwriting to date as she teams up with long time friends and collaborators such as Jon Randall, Natalie Hemby and Luke Dick. The previously release ‘If I Was A Cowboy’ is testament to this as she uses her Texas twang and vocabulary to set the scene, ‘Ridin off in the sunset, blue eyes under my stetson’ she begins. It is a song bursting with personality, as is the whole record in fact. ‘That’s What Makes The Jukebox Play’ is a wistful slow dance which gives a nod to what country music is.

The only song Lambert didn’t co-write is a cover of Mick Jagger’s 1993 ‘Wandering Spirit’ which Lambert really makes her own, it’s a fun, upbeat track with the theme encapsulating what Lambert is about and what this record is about – wild and free spirited.

Produced by Lambert, Luke Dick, Jon Randall and Mikey Reaves the sound is cohesive and complements each lyric perfectly. It’s polished but not over produced.

To conclude, Lambert really shines as a songwriter on this record, bursting with vivid, scenic lyricism delivered by simple yet catchy melodies, it may be Lambert’s best record to date. Her vocals are flawless throughout and the soundscapes created in the arrangement and production perfectly compliment the narrative.