Russell Dickerson: A southern symphony for the ages 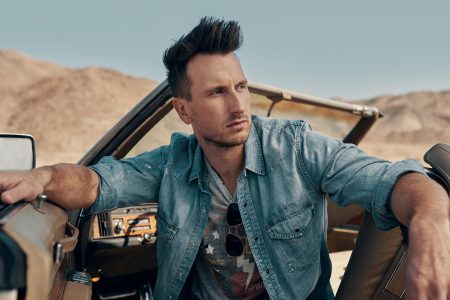 Country music is always looking for its next best thing and while a lot of people have had that statement, few have dealt with it as well as Russell Dickerson. The Tennessee born artist has been plucking away in the background, putting in the hard work and patiently waiting for the world to appreciate his talent and now it seems things are really falling into place for him on his ascent to one of country music’s best artists.
With his second album ‘Southern Symphony’, Dickerson has certainly made a statement of his own. The 10-song collection is a superb offering and the artist has thoroughly enjoyed being back in album release mode after three years, with that time mainly going towards pushing his singles from his previous record.
“It’s crazy because it’s been like three years…with a baby it’s nine months!” Dickerson exclaims. “I haven’t put an album out in three years, so I’m just loving the build and excitement – especially with these songs. These are the best songs I’ve ever written, so to have so much care and so much time during the lockdown to really dive into these songs sonically, I just have so much more connection to these songs and it’s like putting out an actual child. That’s how exciting it is.
“The wait was because of the timing of the first three single from the ‘Yours’ album. As a new artist, it takes a lot longer for songs to climb up the charts – specifically radio charts – so it took almost a year per song, which is kinda crazy but you’ve gotta start somewhere. You have to push, you have to grind and you have to earn your stripes on radio. So that was the reason that it was three years.”

A lifetime in the making

Even though three years is a relatively long time, it isn’t quite a lifetime, so it was quite surprising to see Dickerson explain in the build-up to the album that this was something that had been a lifetime in the making. However, it is very easy to see what Dickerson means after he explains it, as the record allowed him to go way back in time and saw him dig up all sorts of childhood memories in the process, which had the potential to be something of a culture shock for someone who very much lives life in the moment.
“What I meant was more that the stories I’ve acquired throughout my whole life are on the album. That specific quote is mentioning Southern Symphony – the title track of the album. That song just goes back to how I was raised, where I come from and all of the memories of my childhood. It takes in all those little pieces of my childhood and all those sounds together in the chorus and that’s what comes together to make a Southern symphony – and that’s how I got the album title. Those memories that I’ve had my entire life…I hadn’t gone there in my brain yet as an artist. I hadn’t gone back in time. ‘Yours’ was kind of like my wedding, a love letter to my wife and this one goes a bit further back on the timeline and deeper into emotions.
“Sticking with that song, everything has always been about the present day for me – you live life today, have the best day ever – that’s the kind of person I am. I try and crush every single day and make it the best day possible. But going back to childhood memories and digging those up, that was a deeper meaning for me to put into a song and that’s vulnerable. You don’t know what you’re gonna dig up from your childhood and it shows a little more emotion, which was a big part for me. Not only that, but if I didn’t have any emotional attachment to these lyrics…Thomas Rhett said it’s his favourite song that I’ve ever written. I think it is as well, it’s one of the best songs that I’ve just written. That one’s really special to me.”

The story of Russell and Kailey

Another song that is very special to Dickerson on the record is Home Sweet, which is essentially the entire timeline of Dickerson and his wife Kailey in a three-and-a-half-minute song. As Dickerson admits, his debut album ‘Yours’ was essentially a love letter to his wife, but given the fantastic news that they were going to become parents, Dickerson found a way to get another excellent song in about the two, which highlighted both the highs and the lows of the music industry and life, but also the strength of the pair together.
“Home Sweet, track two is another one very close to me. It’s just the most perfect timeline of my wife and I getting married and then from there to having a baby in verse three. It talks about how we got home from our all-inclusive honeymoon on the beach, bottomless margaritas, to me getting dropped from my publishing deal the week that we got back. So to go from paradise to a quick reality check, that was verse one.
“Verse two was being on the road like crazy – hotel room after hotel room, brushing our teeth in truck stops and then for verse three, we’re sitting on boxes. Last year, we found out we were having a baby Jan 1 and there were boxes everywhere in our house that we’d just moved into. That song is bluntly our story.”

If at first you don’t succeed…

While Dickerson worked with his usual suspects in Casey Brown and Parker Welling for ‘Southern Symphony’, he also worked with Dann Huff – the legendary Nashville producer – and Dickerson believes that Huff took the album to a new level. Amazingly, the two had crossed paths before and Dickerson was turned down by Huff, but after Dickerson showcased his talent on ‘Yours’, the tables turned and it was Huff asking to work with Dickerson – a decision that worked out brilliantly.
“Working with Dann was incredible. Our history actually goes back to 2012, when I went to meet with him because my publisher was making a record on me. We went to Dann Huff and he took the meeting, sat down and we talked and he said at the end of the meeting that I wasn’t ready. I was so bummed and really wanted to work with him so bad – but he was right. I wasn’t ready. I didn’t have the songs.
“Anyway, I saw him when I was accepting my award for ‘Yours’ at the BMI awards, so I had the award in my hand and I was so pumped and we brushed shoulders. He stopped me – he stopped me, which was amazing – and he was like, ‘hey, I’ve seen what you’re doing. I know I turned you down, but I’d love to be a part of what you’re doing.’ I was like, ‘oh my gosh!’ It was kind of like dating – I didn’t text him the next morning or call him the next week, I let it simmer a bit! I was like ‘holy crap, Dann Huff wants to work with me’ – those words were said. I gave it a couple of weeks, a month or whatever and then I reached out like ‘hey man, we’re starting to work on record two and I’m just seeing if you meant what you said, like I don’t know, did you have a few cocktails and were you saying that, or is this for real?’
“Turns out he did mean it, he was on board and as far as it went in the studio, he took this thing to a whole new level we didn’t have before. The respect that he carries, the respect that people show him in the studio and the fact that he would hand the baton to me to talk to everybody, too. Dann Huff would be going ‘hey, listen to this kid, cos he knows what he’s talking about’ or whatever and it was just amazing to see him in the studio. To then hear what we left the studio with is one thing, but then when he goes into his little lab at home and goes crazy on guitar, that’s what takes it to the next level.”

Flag in the ground

The next level is something that Dickerson naturally aspires to be at, though he has quietly held the belief that it will fall into place for him. Given his chart success – securing four Number One singles in a row on US Country Radio – and now with another standout album under his name, it’s starting to fall into place nicely, which means Dickerson is getting his rewards for putting in the hard yards.
“I think we have earned those stripes with radio and with all the ambiguous gatekeepers that there are in this business. When you have four #1s in a row and the last one is a two week #1 and still in the top five a month later – that’s a flag in the ground for myself and my team to really just show that album two is the highest contender with all of them. It is the most gratifying feeling because I’ve worked so hard for so long.
“The words that I’ve heard are that I’m an underrated artist, I’m not getting the attention I should etc – it’s never been the opposite. I hear that a lot, but it’s better than the opposite. For me, I’d rather be underrated than overrated. If you’re overrated, it’s not a good place to be. You’re under a microscope. But to be underrated, you have cheerleaders in the industry and I know that I’m gonna be around for a long time – I’ve worked harder than a lot of people to get to where I am and I’m fine with that.
“But to finally get to that point where my name is next to Luke Combs, Brooks & Dunn and Florida Georgia Line with four #1 debut singles…that was a huge moment and a very, very proud moment for me and my team. We can be like ‘we told you – we’re not playing around’ and that was a fun stat to dig up. A lot of wise people in this industry say that the rise is equal to the fall. If it’s a quick rise, it’s a quick fall. I’ve always held to that, so slow rise and slow fall. I’m just gonna keep doing my thing and keep making music.”
The hard work is certainly paying off and when Dickerson is coming out with music as good as ‘Southern Symphony’, it’ll only make us all eagerly anticipate what comes next.

To stay up to date on the latest interviews, album reviews and music event news within the country music market please register to receive our newsletter here.