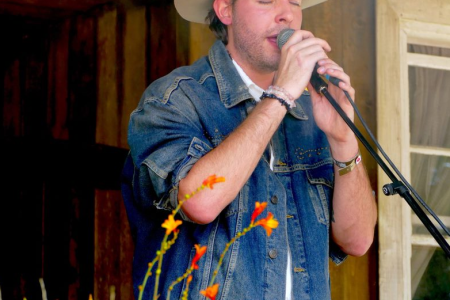 Sam Williams comes from the country music dynasty; his grandfather was Hank Williams, his father is hank Williams junior and a number of his siblings are also musicians. After catching up with him last year when he released ‘Glasshouse Children’ I couldn’t wait to see him perform live again in the UK at The Long Road. In the sun, in front of a packed crowd, Williams took to the Front Porch stage at The Long Road to share his heartfelt songs but not before he had a chat with us about what he’s been up to recently.

Would any of those little ditties from school make the cut on a future record?

Haha no, but I think some of the songs that are going on the next album are from a few years ago. Sometimes songs show their strength over time, and you just grow accustomed to some so some of the new ones coming out are a few years older.

The last time we spoke, the album was just about to come out, and it’s a fantastic record. I asked you about your collaboration with Dolly. But of course, you’ve also got a collaboration with Keith Urban on there. I wondered if you could tell me a little bit about that song and about how that collaboration came about?

I needed something that wasn’t as introspective and emotional as some of the other songs on the album. And I thought that ‘Kids’ fit the bill for that really well. Keith Urban was thinking about recording ‘Wild Girl’, he had it put on hold for a while and that didn’t end up happening. So we just kind of reached out for the favour and he threw some guitar on it made it and kicked it up to the next level.

How does it feel when an artist like Keith Urban comes along and puts one of your songs on hold?

Well, it feels really good, you think that maybe more people will get to hear it. I’m always excited about what they might do with it. A lot of times, it doesn’t end up happening, but it’s still an exciting experience.

The new music that you’re working on, can you tell us about some of the people that you’ve been working with?

This the new Deluxe album that’s coming out. It’s just a few new songs from me. One of my favourite songwriters to write with, his name is Ben Roberts. He’s from a group called Carolina Story. Several of them are with Ben actually. And then there’s a song that I wrote with Eric Paslay a few years ago called ‘Blame On Both’. And I did a few songs with Jaren Johnston and I did a few songs with the producer Luke Dick, he produced a new song ‘Ragdoll’ that just came out. So it was fun to work with a new producer and just try different sounds.

When you’re working with someone new like that, a new producer or a new songwriter, do you ever get nervous about putting your ideas across or does it just come naturally to you?

I think with a new producer you never know if your sound is still gonna shine through at the end of the day, like the sound that I’ve been building. But I think that we did a really, really good job and he polished these records. With songwriters, it’s second nature to open up, but I mean, if you just meet someone for the first time, then no. It can be really hard to kind of bare your soul. So sometimes it’s worth working with people that you’ve known for a little bit longer and it just depends where you are that day. Sometimes emotions can be too heavy and it’s hard to write something. Then sometimes it’s just happens magically.

On stage are you completely focused or do you let your mind wander, we call it your mid-gig thoughts?

I’ve been thinking of home a lot lately so I may be distracted but I like to look at the people in the audience and try to figure out their backgrounds and what their perception is of me.

If you weren’t a musician, what do you think you’d be doing?

I guess I would be in something that’s business and creative. So maybe I would start my own creative company or something, I don’t know. Because I honestly didn’t really have that much of a choice. You can’t fool your own blood. Maybe I would have like a boutique shop or something. My sister Holly has some shops and businesses. So maybe I would get into something like that. I wanted to be a race car driver when I was a little kid though.

Who would be your dream person to collaborate with?

Miley Cyrus. I just think that she has a great evolution as an artist. And when she commits to a new sound, she really commits to it and portrays that image really well. The power of her voice is so strong, and I’ve always admired it. So I’d love to do something with Miley one day.

The accents! I like the tubes and the architecture and history – it’s really interesting. It’s also really cool to see so many cultures, America is so spread out. So there might be little pockets and areas where cultures are prevalent. But I feel like in England, it is so mixed. In all areas of London, there’s like Nigerian people and Lebanese people and people from Pakistan and people from India. It’s just really interesting.