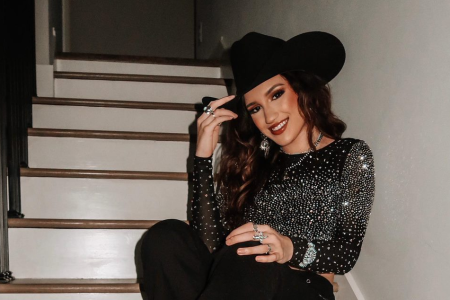 I always love interviewing artists who are from Texas. From Miranda Lambert to Jon Randall, Jack Ingram to Charley Crockett, they all have such a passion for their home state. They’re often strong willed and their music has a distinct identity about it. Savannah Rae is a rising star from Texas who is trying to follow in the footsteps of those mentioned above. An independent artist with a small team around her trying to take on the music industry.

Savannah Rae’s love of music began as a child, she vividly remembers music playing around the house and in the car and though deep in the heart of Texas, the music covered an array of styles and genres. “My parents gave me a vast love and appreciation for all types of music,” she begins. “They threw everything at me from rock to pop to country, to you know, like 15 century lute music, you name it, they pretty much threw everything at me. But I would say that the main two that they threw at me were rock music. Then of course, being from Texas, was country music. Those are the two that I connected with the most, especially nowadays.”

Her father is very involved and supportive of her music career and both parents took her to concerts from an early age. “I first knew that I wanted to be musician, probably when I was around 12 years old. My parents were taking me to concerts all the time and I really just kind of fell in love with the whole experience.” She began to look for other strong willed females within the rock and country world that she could look up to. “Then I started looking up to other females that were kind of in that area that were really killing it, which at that time, in the rock world at least was Amy Lee of Evanescence. And I saw her up on stage and I was like, wow, that’s, that’s what I want to do. That’s who I want to be. And thankfully, my parents took me very seriously when I said that. And they enrolled me into vocal and guitar lessons. At 12 years old, I had my first full band show at this tiny little burger place called Sam’s burger joint in San Antonio, Texas. And right then and there, I guess I just caught the bug. I was like, this is what I want to do for the rest of my life.”

Texas, with it’s own niche music scene, welcomed her to stages all around the state. “Texas people, we are so proud of Texas, we have the most State pride it really is like a tiny country in itself,” she says as a proud smile crosses her face. “So growing up there, it’s a different experience. Texas also has its brand of Texas country music that is very different from maybe something that you might hear on Nashville, country radio, top 40 country radio. I don’t wanna say it’s underground because there’s so many different Texas country artists that are just killing it right now like selling out every single show. But we are definitely more on the red dirt side of things, Texas and Oklahoma do this red dirt style of country music, which is how it leans in more to the Southern rock side of things, very organic sounds, very band driven.”

“When you think of Nashville country, you think maybe more the top 40, the pop side of the country world, and the Texas Red Dirt scene, that’s definitely more on the rock side of things. So it’s a whole different world out there. Then of course, you have your traditional country, which is very prevalent down there for sure. There’s a lot of new artists coming out of Texas, that definitely do have that traditional country sound as well that are kind of bringing it back.”

READ THE FULL INTERVIEW IN THE LATEST ISSUE OF MAVERICK MAGAZINE HERE!