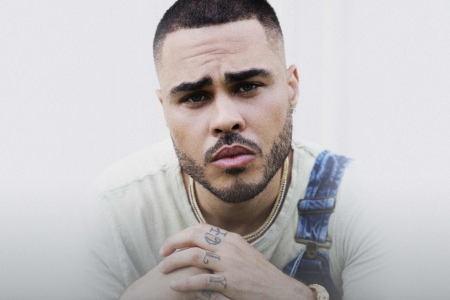 Shy Carter instantly built a rapport with the audience when he played at CMA Songwriters the night before Country 2 Country. He knew how to work the stage and his energy was infectious. Carter released an eight track record towards the end of last year which allowed him to really introduce himself as an artist, but for years he’s been behind the scenes, writing hit songs for our favourite artists.

Carter incorporates pop and R&B into his brand of country music, carving his own unique path through the genre. He grew up in Memphis and spent his formative years on Beale street but it wasn’t country he began playing first. “I liked music when I was little, but then I started playing sports. When I was in seventh or eighth grade, there was some R&B music that was out and I started a little R&B group, and we would sing in school. So that’s when I really started falling in love with it. When I was 16, I recorded my first song and that’s when I knew, I got to do this.”

His parents played the likes of Tracy Chapman, Van Morrison and Carole King to him whilst now his go to artists are Stevie Wonder, Bob Marley and Marvin Gaye. So how did he find his way into country music with influences like those? His first success within the genre came in 2010 with the Sugarland hit, ‘Stuck Like Glue’. “We were out in California. I had a Rob Thomas song, that was my first hit so I was like, I gotta go to LA, try to capitalise on this. I had been going to Nashville from Atlanta. So I was listening to country music a lot. I was really trying to get involved there but I hadn’t had any cuts or anything,” Carter sets the scene.

At that time, Carter was writing a lot with Kevin Griffin, frontman of the band Better Than Ezra. “Kevin and I were writing together and we just started making that groove and started beating on his guitar, like beatboxing, so it started from a groove. The words ‘Stuck Like Glue’ came from a freestyle, just getting on the mic and just singing. When we were halfway through it, Kevin said this would be great for Sugarland. So we sent the song to their drummer who had been in Better Than Ezra with Kevin. He said, they need a single, so we sent it to him, they wrote the bridge, they wanted us to leave some spots open for them to write on it and they wrote that awesome bridge with all the reggae feeling stuff, which everybody thought I wrote, but I didn’t.” He opened his performance in London with the song, beatboxing his way through it, getting the crowd involved from the off.

Carter has the kind of lovable personality that allows him to get on with almost anybody it seems and this allows him to instantly connect in his live shows, “I’m pretty focused on the audience, I don’t think I have much time to be thinking about nerves. I’m definitely in the moment. That’s my favourite time, being on stage and connecting with people and see them connecting with the music, smiling and dancing – that’s my favourite time.” In the writing room, he adapts to his co-writers preferred way of writing and shines when he gets the chance to freestyle. “We start from any kind of way, sometimes somebody will have a title, a lot of people like to write from a title. I like to just get on the microphone and freestyle a bit, sing melodies or come up with a little groove, I like to really have fun with it. I got into music to have fun. So I don’t want to be banging my head against the wall with what are we gonna do?”

When it comes to the songs on his latest project, Carter drew from personal experience. ‘Beer With My Friends’, one of his most popular tracks is a relatable one too. “That was just a fun day out in the country,” Carter smiles fondly as he reflects. “Brian Simpson had the idea, David Lee Murphy’s a legend out here so we were sitting around, on the guitar. He said he had the idea in COVID, just simple, we all just wanted to sit down and have a beer with our friends. We wanted it to have some more meat on it. So we tried to say something meaningful in the verses and still keep it in the party vibe.”

From writing songs he’s releasing himself to getting cuts and hits with artists such as Charlie Puth, Keith Urban and Megan Trainor, Carter adapts accordingly in the writing room. “My mindset definitely changes depending on who we’re writing for. If I’m going in there writing for me, I want to make sure that it’s something I want to say. And if we’re writing for somebody else, I want to make sure that it’s their kind of vibe. Sometimes, that can be tricky. So I think my favourite is just going in there and writing and not worrying about who’s gonna sing it. Just trying to make the best thing we can make that day with nothing getting in the way. Then the song lands where it lands.”

In the Pop and Country world he’s landed a few big hits including Kane Brown’s ‘Heaven’. Released in 2017, the song topped the country airplay charts the following year and peaked at number 2 in the Hot Country Songs chart. For Carter, it is the one song he is most proud of. “It’s like seven times platinum or something like that so I’m pretty proud of that,” he laughs. He knew as he was writing it with his friends that they had something special. “Most of the time you know, I think sometimes we feel that and then it doesn’t translate when we get outside the room.”

One song that didn’t quite have the impact they thought it would was Tim McGraw and Faith Hill’s ‘Speak To A Girl’. Peaking at number six on the Hot Country Songs chart, ‘Speak To A Girl’ barely broke into the top 20 on the Country Airplay charts. That being said, it is still one of the songs people ask Carter about the most. “We all felt like that should have been a number one song. It was really special. A lot of people wanted it. We wrote it in Jamaica, me and a guy named Dave Gibson and Joe Spargur. Dave had an idea and it was just beautiful. So we just put it together and Missy got a hold of it, straight away she was like Tim and Faith and we were like yeah, it’s going to be really huge, being played all over the place. I’m glad a lot of people still bring it up, it’s a very special song. I think it has a great spirit to it, it is a powerful thing to be said.”

Carter grins as he teases about his plans for the future, “Well, we’ve got a documentary coming out and some great new music, plus a couple of surprises.” Carter is sure to blossom as an artist, particularly since he has the songwriting element mastered and if his performances across the C2C weekend are anything to go by, he also has the stage presence down to a tee too. Carter will be performing at this years CMA Fest.