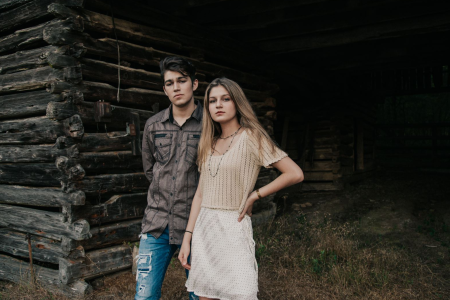 Sibling duo Juna N Joey impressed the UK crowd with their brand of country pop when they supported Twinnie on tour last year. The pair, based out in Nashville, are one of the rising stars of the genre and at the tender ages of 16 and 19, are writing songs that are both catchy and meaningful. Through the pandemic, the pair put out a number of cover songs that they put their own stamp on but as the world starts to open up and they plan another trip across the pond, the pair are preparing to release more of their self-penned songs. I caught up with them to find out more about their journey so far.

Did you both always know that you wanted to be musicians?

Juna: I started around a super early age, like three or four I started doing lessons, and classical music, and then Joey kind of came along.

Joey: I was a sports guy. I played basketball, baseball, football, soccer, and had no intentions of doing music whatsoever. I went to one of my sister’s lessons and decided to try the piano and she was like, Oh, you can actually sing? So I started to sing and the rest is history.

What music did your family play to you growing up?

Juna: Growing up, my mum always listened to country music. But we never really got into it right off the bat, we sifted through a few genres. We were in a classic rock band when we were younger. Then we switched over to country music when we broke off as a duo. I would say to this day, that’s pretty much all we listen to now. A few of our favourite artists include Luke Combs, Morgan Wallen, Cody Johnson, Parker, McCollum.

What’s the songwriting process like for you, are you both involved? Do you draw mainly from personal experiences?

Joey: Well, we have this thing called a hook book where we write down titles and those title ideas can come from movies or things our mum and dad say. We come together and brainstorm ideas often but we write separately too and with other co-writers.

Can you tell me the story behind your song ’Til Your Heart Breaks’?

Juna: It’s about not appreciating a great love that you had or someone great until your heart has been broken. Not knowing what it means to really cry and miss somebody until they’re gone. We didn’t walk into the writing session thinking we were going to write a heartbreak song today, we just started playing around with ideas. We wrote it with Doug Lowe who is an amazing songwriter and pianist and he started playing this on the piano and then we started brainstorming lyric ideas.

Joey: As soon as we got that piano down we knew the song was going to be one of those songs where you have to get your Kleenex out.

You guys kept yourselves busy during the pandemic, can you tell us how you found the lockdown?

Juna: Covid brought a lot of challenges for musicians, because we couldn’t go out and tour like we were used to. We definitely had to resort to social media, and really get our platforms built up in this time where we can’t physically go out and make fans and connect with people. We also did a COVID covers EP on our Spotify.

Joey: We took songs that had to do with being alone or relating to tough times, like ‘Six Feet Apart’ and ‘All By Myself’. So we decided to do something like that, since we couldn’t like go to the studio. We recorded it at our house. But touring is one of my favourite things to do so we did miss it.

A few silly questions for you now. What’s the strangest thing you’ve ever written a song about?

Juna: We do these weekly live-streams on Tik-Tok and we ask people to give us a random word and we make a song up about it real quick. They start spewing out random words like football and mangoes but it’s not anything we’re going to put out on Spotify.

If you were to describe your personality as a flavour of potato chip, what flavour would you be?

Juna: I’ve never had this question before but I feel Joey would be a kettle corn potato chip because he’s sweet and salty. He’s good fun but if he’s not feeling fun he’s got this little kick to him.

Joey: Juna would be flaming hot Cheetos because she’s spicy.

What’s been your proudest moment so far?

Joey: I think my proudest moment was going to England. That was really fun; the people were so kind, the sound system for the music was spectacular, the food was amazing. Going to a different part of the world was amazing and the money system was so cool – it’s beautiful.

Juna: It’s so pretty, like so gorgeous. I think everybody was super welcoming, especially for new artists and American artists.

Joey: We’re coming back to England later this year, we’re playing Tennessee Fields which we can’t wait for.

Juna: We’re also putting together a self-titled EP. We’ve not got a lot of originals out there so we’re working to get more out to our fans. We have some music videos to film, TV shows, Hallmark movies – it’s an exciting time.

READ THE FULL INTERVIEW IN THE LATEST ISSUE OF MAVERICK MAGAZINE AVAILABLE HERE!