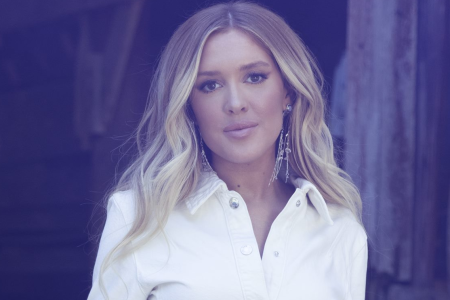 Music was always second nature for me. I just grew up around it. So I don’t really remember a time where music wasn’t the whole forefront of my entire life. But I do remember, I got on stage at eight years old, my family are very musical, and every year they had this show called the Ogden Jubilee. I sang by myself, ‘Crazy’ by Patsy Cline and got a standing ovation, because I was eight right? I remember just in that moment, I was like, this is what I want to do for the rest of my life.

So you said that your family was very musical, what sort of music did they play to you on long car journeys, and what are you choosing to listen to now?

So my dad is a huge Merle Haggard fan. He has Merle Haggard’s signature tattooed on his forearm and he loved Waylon and Willie and my mom loves Shania Twain and The Chicks and Jo Dee Messina. So I grew up on all of that and Patsy Cline, but what I discovered at age 11 was Stevie Nicks and Norah Jones and it completely consumed me. I am so obsessed with those ladies. They gave me a lot of courage because at that age, I was discovering my voice still, and I knew I wasn’t a belter, I wasn’t Carrie Underwood or Martina McBride. When I heard their voices, it really gave me the courage to go after this dream.

Growing up in Texas was amazing. I wouldn’t have wanted to grow up anywhere else. I grew up in a small town in East Texas, population 5000. It was just peaceful, everybody knew everybody. We had one Walmart, and we would have to drive an hour and a half to go find school clothes. The food is amazing. I guess I have such pride and so does everybody else because it’s kind of like its own country. My dad’s actually a Texas country music artist, he’s been doing that since he was 14 years old, it’s such a unique sound, they call it the red dirt sound. I have such an appreciation for it. My favourites are The Randy Rogers Band, The Josh Abbott Band and my dad of course.

I wanted to ask you about your time on American Idol, and sort of what you learned from that experience?

It was such an amazing time but it happened so fast. It was like a completely other world. It was the best decision I’ve ever made in my life. It taught me a lot about like self worth and confidence. I would say I’ve grown a lot since, I was 23 on the show and now I’m 26, I grew up. I’ve really discovered who I want to be and who I am and have a lot more confidence than I did before the show.

When it comes to songwriting, do you like to start from a certain place like a melody or lyric or is it different every time?

If I’m co-writing, it’s different every time but personally, when I write by myself, and when I write with other people, I love starting with the melody. I have voice notes in my phone, I think I have like 600. Sometimes they’re absolutely horrible but they’re just all different melodies that I feel would be cool in a country song.

Who are your favourite co-writers in Nashville?

The community just opened their arms to me when I came here, luckily, and I’ve just felt so at home. But a couple of my favourites are Sam Ellis, Sarah Hayes, Nathan Chapman. I love Laura Veltz, Jimmy Robins, Jessie Jo Dillon.

Can you tell me the story behind your song ‘Shuffle’?

I was writing with Sam Ellis and Derrick Southerland. I like to have a lot of ideas before I go in to write because I don’t want to show up as one of those artists that are like write a song for me, I want to put my work in. I didn’t have any ideas and I was kind of stressing out. I was driving in and I think ‘Stand By Your Man’ by Tammy Wynette came on the playlist I was listening to. I had this really vivid memory pop up, back in my childhood days, we would go over to my grandma’s house, and we’d all go on the back porch. She’d drag out the karaoke machine and she would always sing ‘Stand By Your Man’ and dedicate it to my grandpa who was pretty wild back in the day but he’s an angel now. I was thinking about that and thinking who’s my person? And I jokingly said, ‘Dang, I’m somewhere between ‘Stand By Your Man’ and ‘Goodbye Earle’. I thought that was a pretty cool idea for a song. My co-writers were like, let’s make it one of those song title songs. I thought it’d be cool to make it all female song titles that I grew up on.

I was at this festival one time and I saw this guy, I didn’t even talk to him. He was an artist, I remember he was so funny. Teenage me just fell completely in love with this guy that I never even talked to. I think his name was Scotty, not Scotty McCreery. I wrote a song about Scotty, I still have my voice notes. I came across it the other day so I wrote a song about a complete stranger and I think that’s probably the strangest one.

What are you most excited for about coming to the UK? What can fans expect from you at C2C?

This is my first time coming overseas to London. I’m really excited, I’m a little nervous about the long flight but I’ve heard you have really good places for tea, and I’m excited to try those. I’m doing all acoustic performances, I heard you guys like that so I’m excited to see that.

READ THE FULL INTERVIEW IN THE LATEST ISSUE OF MAVERICK MAGAZINE AVAILABLE HERE!