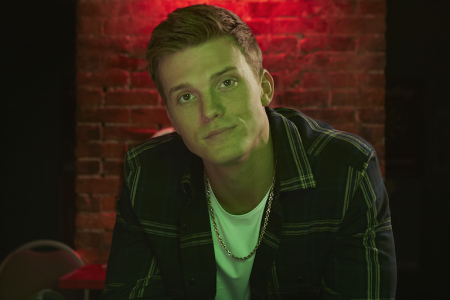 You’ve said in previous interviews that your brother influenced you a lot growing up, how big of an impact did he have on your musical career?

He had a tremendous influence. We had the opposite of a musical household, playing guitar was his escape. He was six years older than me and I just wanted to do what my older brother was doing. If he’d been ice skating, I’d be a professional ice skater right now. But he was playing guitar, writing songs and singing and I wanted to do it too as his little brother, my cousins picked it up too after he did. We’d all be working for our granddad on the ranch in the summertime and then we’d sit around, play guitar and sneak beers away.

Where do you draw influence from in your lyric writing?

I would say it’s 85% personal experience 15% making stuff up. Sometimes I like to sit down and let my mind go, just make something up, almost like a free writing technique. I think those days when maybe you’re just feeling a little off or something didn’t go your way, those are the days I feel like the best songs come out, because you’re a little more in touch with that side of yourself. Songwriting is the most compelling thing I’ve ever done in my life. There’s just no rhyme or reason or method to it. It’s like hitting a baseball, you can either hit it or you can’t.

You’ve collaborated with a lot of talented people on this record, ‘Gold Chain Cowboy’. Could you tell me a little bit more about some of those people you worked with?

I say it all the time, I’m the luckiest son of a gun in the world. Ending up in a room with Tony Lane, what an absolute treat to get to write with him, I ended up in a room with Jon Randall and Miranda Lambert, Randy Rogers. Sometimes I’m sitting in those rooms and I’m going, ‘why they let me in here?’ I always just try to take advantage of those times when you’re writing with someone like Miranda who I’m such a fan of. We know each other a little bit now, she’s just such a superstar, but when you’re talking to her one on one, she’s just like talking to anybody else. I can’t say enough about her. She’s one of the special ones in country music for sure.

Tell me about the story behind your number one hit ‘Pretty Heart’.

I had my first big co-write in Nashville, everything else had been written with my brother or solo. I got to write with a guy named Randy Montana who I didn’t know but I knew he was a big writer so I didn’t want to go in empty handed. I was digging through some old stuff the night before and found this video of me singing this hook over and over. So I took it in to him the next day and his eyes lit up, he said “Let’s chase that!” We wrote it rather quickly, I want to say it took maybe an hour. I remember leaving and thinking ‘Man that was such a good idea but we just ruined it.’ Which I do often. I put it on the back burner for a couple of months and when I went in to do some demos, that was the first song we demo’d and that’s what you hear on the record, we never cut it again. I was in the studio singing vocals and I thought to myself, ‘this is a lot better than I give it credit for, I was wrong.’ I remember when they told me it went gold, that was something that hadn’t even crossed my mind. That seemed like something that Michael Jackson did. So when they handed me that plaque, I was blown away!

If people only listened to one song on the album, which one would you want them to hear? What’s your favourite?

It’s a song called Rest Of My Life. I wrote it during the early lockdown days, where no one could leave the house and going to the grocery store was a big deal. It really messed with me and I was treating myself poorly. I needed to find a way of writing that was less damaging. I woke up one day with this melody in my head, I recorded myself humming it on my phone and put it on the bluetooth speaker whilst I went and showered, I turned the water off halfway through and wrote it – boom, it was done right there. It was nice to be sober, in a good headspace and not have to second guess myself. It was a really healthy song for me to write. It’s the only solo write on the record.

You’re from Texas, I know Texas has a cool country scene what’s it like to be a part of that scene?

Texas is home and it gave me my start. I cut my teeth there in a van with four or five guys playing empty bars. I don’t think I ever would have gotten the opportunity that I’m getting now had I not had what I have in Texas and and I’ll never take them for granted. It’s my favourite place to play in the world.

I had a dream that Elvis was my granddad. And and then I didn’t know he was my granddad until the funeral. I wrote Memphis Rain off my second album about that dream.