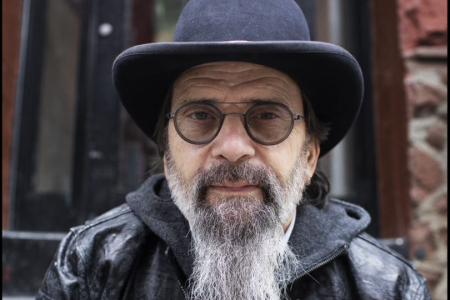 Back in May, Steve Earle released his latest album, a tribute to Jerry Jeff Walker, completing his trio of tributes to his ‘first-hand teachers’ after releasing ‘Townes’ and ‘Guy’ in 2009 and 2019 respectively. Although the albums were released in the order that the music greats left this world, for Earle it was Jerry Jeff that inspired him first.

Growing up, he was raised on The Beatles, Elvis and Johnny Cash and can recall early memories of wanting to be a musician. “I listened to all that stuff when I was little, I saw the Beatles on Ed Sullivan, when I was eight and that was kind of a mind blur. I never really wanted to be anything else, except for Harry Houdini for 30 seconds and an astronaut for 30 seconds. But I mostly just wanted to play guitar and sing,” he laughs. Playing his Uncle’s hand-me-down records, he let the music inspire him and propel him forward.

It was in school that he first came to know and love the music of Jerry Jeff Walker. The Outlaw country star had not long since released his signature hit ‘Mr Bojangles’ in the late 60’s when Earle was handed one of his records. “I was in the ninth grade, so I was 14 years old and a drama teacher, the only teacher that didn’t kick me out the class just decided that I would be singing the songs in this show which was a review of Sandburg poetry. But he had a book called The American Songbag, that’s where the version of cocaine blues that Gary Davis did came from, a lot of the stuff that folk singers sang came from that book. He thought Mr. Bojangles would fit into that show, so he gave me the album, and I learned that, it was about a year after the album came out. So as long as I’ve been playing, I knew who Jerry Jeff Walker was.”

Earle came to know and love all three of his heroes that he paid tribute to, building meaningful working relationships with them as they took him under their wing, taught him all they knew and supported his music too. “It was a different relationship with Jerry Jeff than with Guy and Townes because, Jerry Jeff was somebody I kind of stalked around, once he moved to Texas, I crashed his 32nd birthday party, but we didn’t meet even then,” Earle laughs. “I went on to Nashville, Townes gave me an introduction to Guy Clark and Guy and Jerry Jeff were very close because Jerry Jeff had recorded three of his songs over two albums that sort of got his career jump started. So Jerry found out about me because Guy insisted that people know about me and Jerry Jeff was that way about people too.”

It wasn’t all about the music though as Jerry Jeff called upon Earle whenever he was in town to help get around, “Sometimes Jerry Jeff would come to town and he’d track me down mainly to be his designated driver, because he had sort of done something that he didn’t think it was wise for him to drive in Tennessee anymore. I got lucky, I got to meet a lot of people because of that.” When Earle began making records and hitting the road himself, the pair lost touch for a while but like all true friendships, their paths crossed again later down the line.

“About 18 years ago, I got a phone call out of the blue from Jerry Jeff. And he said Django his son is moving to Nashville, could you help introduce him to some people. I said, Jerry Jeff, I just moved to New York, so I’m not there very much but I’ll help him out with some telephone numbers and call some people and I did and we stayed in touch after that. A few years later, he was diagnosed with cancer and after that, he texted more and we talked. And, he did come into the studio to sing on the Guy record. I’m grateful that we were back in touch the last few years of his life, because it was very important to me,” he reflects.

Though Jerry Jeff put out some fantastic versions of other people’s songs that gained notoriety, the main criteria for this record was that all ten tracks be written by Jerry Jeff. It includes ‘Mr Bojangles’ and lesser-known ballads such as ‘Old Road’ – the closing track – and ‘Wheel’. When it came to choosing the tracks, Earle says, “It was basically the ones I could do justice to. But the main criteria was they were all Jerry Jeff Walker songs because he was also famous for interpreting other people’s songs so we recorded a few things as bonus tracks and Record Store Day singles that he didn’t write. But all this album, all 10 songs, he wrote, going back to the beginning of his career. It’s sort of a roadmap of his life.”

As a kid, it was his dream to be Jerry Jeff and so naturally, he takes on that sound in his own interpretation. “I think I tried to play all the songs as much like Jerry Jeff Walker as I could when I was a kid. And I think I’m still doing that. But I think I just reached a point with this band that I’ve got, and what I do, I just sort of, don’t have to even think about that. I just play them the way I can play and it sounds like Jerry Jeff.”

Earle has now had a long and successful career himself. Quietly plugging away in Nashville, he made his breakthrough in 86 with his hit single ‘Guitar Town’. Two years later, his signature tune ‘Copperhead Road’ would climb it’s way up the charts. But aside from his artistry, Earle has had an illustrious career as a songwriter with the likes of The Highwaymen, Johnny Cash, Travis Tritt and Emmylou Harris all recording his songs. “I just wake up in the morning, with a blank piece of paper, they call the things that artists do disciplines for a reason. So I just try to write something every morning,” he begins. “You’re always terrified that you’re not going to write another one. So if somebody gives me a project to write, I’m grateful for it. It gives me a goal, I know what I’m gonna write today. It just makes it easier.”

Having said that, Earle wasn’t a big fan of writing to a brief and pitching his songs when he was in his youth, “We were told that there were tip sheets, and we tried to follow them and I tried to write songs with people in mind, and that wasn’t very successful. Most of the covers I’ve had on my songs, they’ve been a few exceptions, but the vast majority of what happened when artists discovered my songs on my records and recorded them on their own, not when anybody pitched them. I’ve always been grateful for that. It gave me a way to be a songwriter for a living.”

He has some exciting projects in the works. “Right now, the reason you haven’t seen new songs for me is I’m writing a musical. I’m writing a musical of Tender Mercies with Daisy Foote. So I’m writing every day and I’m co writing a little bit with some writers in Nashville just to try to learn to do some things I haven’t been able to do before. I wrote a TV pilot I’m waiting to hear about and I’ve started another book. There’s plenty of inspiration out there, that’s not the hard part. The hard part is sitting down and actually trying to make something out of it.”

Though known for his country and folk music, Earle has had success in musical theatre before and it is that, that he says is his proudest achievement. ‘Coal Country’ was based on the true events of the US’ worst mining disaster in recent history which took place in West Virginia. “‘Coal Country’ is something I’m really proud of. We took it to West Virginia and the last time we performed it was in a high school auditorium for 1100, West Virginians, most of whom had ties to the 29 guys that died. To see that audience respond to this work that we worked with them on for four years, and that they felt like we got it right. That’s what I’m probably proudest of, when I feel like somebody thinks I got it right, then that’s that, that didn’t get better than that in ‘Coal Country’, it was sort of a Grand Slam when it came to that.”

Now aged 67, Earle shows no sign of slowing down as he works on his musical and contemplates touring again, promising: “We will come to Europe next year. It looks like we’ll start to tour across the pond next year, that’s the word I’m getting.” A message that is sure to delight fans here in the UK!