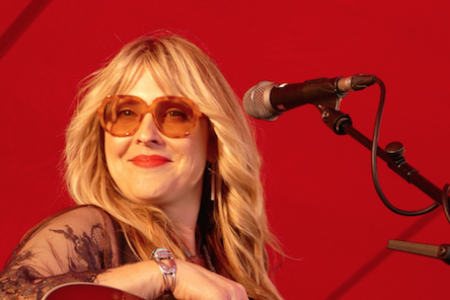 Sunny Sweeney joins me from a blustery cornfield in Kansas City, on her way to Springfield, Missouri. Since the world opened up again, Sweeney has been on the road pretty much none stop, aside from the time taken to make this new record, ‘Married Alone’. Sweeney is known for her confessional songwriting but this latest album is her purest work to date. A trip to the UK precedes it’s release as she embarks on the never ending tour and many of the ideas behind these songs were born on tour.

“I don’t really have a house right now,” Sweeney confesses with a laugh, “I’m just couch surfing because all my stuff’s in storage. I’m trying to decide what I want to do, where I want to live but I’m home so little that I just decided why get a place right now? So I’m literally like an actual Nomad gypsy just chillin and figuring my life out and playing music for people that want to listen. That’s honestly, the only plan that I have for the next couple of months.”

This dedication to her craft and care-free, adventurous approach to life, coupled with raw talent is what has allowed Sweeney to follow her dreams of becoming, not just a singer-songwriter but an entertainer. “From a very young age, I knew I wanted to do something in the entertainment business, I didn’t know what it was going to be. But I knew that it interested me,” she says as she reflects upon the trajectory of her career. She took a round-the-houses trip to find her place in the music industry.

“I went to college for entertainment publicity. So I wanted to be like a publicist. And, I got internships to go with it. I thought I was doing everything on the right path. And then this one internship I had was with Lone Star music, and I was having to go out to clubs every night to basically get other artists to sell their material on our website, and that was kind of my job. When I started going out to these clubs every night, I was like, wait a minute, I can do this. I like meeting people and going out. It was a no brainer for me when it clicked. I went back to my step-dad who had offered to teach me guitar many years before and said, I think I’m ready to learn guitar. so he taught me guitar and I took it from there.”

Now her songs are enjoyed by people all over the world. This August, she performed at Millport and The Long Road festival but it wasn’t her first rodeo in the UK. She takes us all the way back to 2007 for her first trip across the pond. “Honey, I am thrilled beyond belief to be returning to the UK,” she begins. “The first time I came to the UK, it was like 2007 and I was blown away by the fans. It is wild to me, this was prior to all the, really online stuff. We had MySpace maybe but there were fans singing along at my show. Everyone had told me, when you go to Europe, the fans there are the most intense and appreciative. They listen and they’re thought provoking when they speak to you about your songs. I was looking forward to that when I got there. I have maintained friendships with so many of those people that I met over there. So to be able to come back to the UK, and have people know me and my music it’s just so gratifying.”

She returned on the brink of releasing this new record which sees a stellar cast of songwriters on the credits and some fabulous producers but it’s Sweeney’s storytelling that shines through. Life hasn’t been easy, she’s had her fair share of drama what with two divorces and she is an artist that would pride herself on wearing her heart on her sleeve. “Sometimes, you sit down [to write a song] with intention. I went through two divorces, so I mean, I have plenty of material!” She laughs. “A lot of songs are just written, hanging out with a friend. There’s just a friend kind of noodling on guitar and something just comes in your head.”

It was whilst going through one of those rough patches that the idea for ‘A Song Can’t Fix Everything’ popped into her head and she took it to the door of one of country music’s finest lyricists to help her develop the idea further. She recalls the events leading up to that writing session vividly, “I had been on tour with three of my girlfriends, we did a Christmas tour every year, and we were in Chicago, I was going through a divorce, they all had some stuff going on, we were all just a mess. We were leaving on the last day going to the airport. I was getting in the elevator. I want to say, I don’t remember exactly, but I think the handle on my suitcase broke or something like that. This title, just came into my head.”

Luckily, Sweeney was heading off to a writing session so didn’t have long to ponder the idea alone. “I was leaving, going to Boston to write with Lori McKenna. I get there and I’m like, I have this idea. She’s like, Yeah, that’s cool, then we ended up writing something else. Anyway, the next morning, she called me at the hotel. And she’s like, I’ve got it. And when Lori McKenna says I’ve got it, you better get your booty over there quick. So we wrote it and then from that moment on, I was obsessed with that song.”

Sweeney’s producer, Paul Cauthen also joins Sweeney on the recording. She describes the joy of working with Paul, “He is wild and crazy, exactly as you would picture him. Completely full of energy. There’s a happy aura that goes around him. When Paul’s around, everyone’s laughing and smiling.” The East Texas singer-songwriter has had an illustrious artist career himself and really brought these songs to life on ‘Married Alone’.

Though it changes day by day, Sweeney is starting to establish some favourites on the record. “If I had to just pick one I’d probably pick ‘Easy As Hello’ because it’s kind of a combination of my inspirations. It’s a little bit of a different turn for me, which I think is kind of fun and interesting for a change, because I’ve done a lot of the same country things but I’ve decided I want to show a little bit of a different side of myself. So I love that one for that reason. And the title track, I did not write but I’m obsessed with that song. Then Vince Gill sang on it.”

It’s amazing how Gill and Sweeney’s voices fit together like a glove on this song. Gill is an in demand musician these days as he continues with his artist career whilst helping out those younger writers coming through and of course touring as a member of The Eagles. Sweeney explains how that duet fell into place. “We were in the studio, and we recorded the rough tracks of that song. We were all just kind of sitting there in shock, what did we just record like, wow! That is a heavy song, and I was talking out loud more than anything, but I said, Man, you know, it’d be awesome if we got Vince Gill to turn this into a duet,” An idea that most can only ever dream of, but Sweeney was determined to make it a reality. “All the guys were like laughing at me. And I was like, No, seriously think about it and they were like, ‘You’re just gonna call Vince Gill?’ So I went outside and called him and he said yes straight away. He is such an inspiration to me for that reason. He’s just such a sweet guy and so freaking talented. I walked back in and the band thought I was lying when I said he’d said yes. The minute I heard his voice on there, I knew that was exactly what I was imagining. I wouldn’t have had another man do it. He was the only one that would have worked.”

As she begins to pack her case for her UK trip she concludes by reflecting on her proudest moments so far and one esteemed venue crosses her mind. “I would probably say playing the Grand Ole Opry. I have a lot of proud moments, because a lot of my expectations have been exceeded, but I have played the Opry 59 times now. It still makes me really nervous to do it because I don’t want to screw up. It’s the one place I don’t want to screw up more than anywhere I play because of all the people that came before me. I don’t want to let anyone down.”