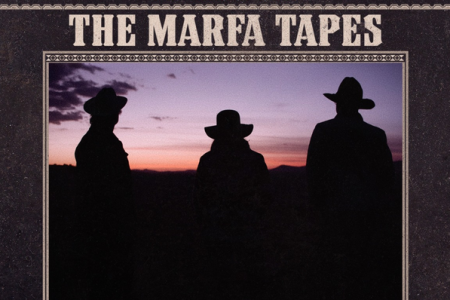 Miranda Lambert, Jon Randall and Jack Ingram have retreated to Marfa to craft songs for the past six years, now they’re sharing their special place with us.

April 12th 2021 Miranda Lambert, Jon Randall and Jack Ingram took to the stage at the ACM Awards to perform ‘In His Arms’ off their new record ‘The Marfa Tapes’. The Texas Trio showcased what real country music is that night, with three guitars and blissful harmonies they reached into the country fan’s soul and spoke their truth. ‘The Marfa Tapes’ is the definition of country music, packaged up in its rawest, most authentic form. From the crackling of the fire, to the carefree laughter the friends share, to the aeroplane you hear overhead – not only does it show you a glimpse inside the creative mindset of three prolific songwriters, it transports you to Marfa, west Texas as if you was sat beside them as they wrote those songs.

The record, with its stripped back nature, is a bold move for the three artists whose reputation precedes them. It’s a far cry from the polished productions of Lambert’s ‘Automatic’ or Ingram’s ‘Midnight Motel’ a record Randall helped produce, but it wasn’t so much as a conscious decision for these songs to be heard in the way that we do. “It kinda decided for us.” Jack begins “We kept going back to the work tapes of the songs we’d written. We kept going back to that same place and on our last trip there back in September – Miranda’s mother and father were there – we played all the songs to them. We thought who knows what kind of record these would be put on, with full production but these work tapes were magical. I think it’s the moment of creation that’s important, we thought lets just set up a camera and play through some of them. It was Miranda’s idea but I raised my hand shortly thereafter.” Miranda adds “We kept being drawn to the place and to the music and I think as a group we decided, why not put them out as they are because they’re beautiful that way, and that’s how they started.”

As off-the-cusp as it feels, this record has been in the making since 2015. “Winds Just Gonna Blow we wrote on our first trip which would have been 2015” Lambert begins “I think that title came from the actual surroundings. We had our phones out trying to record anything we wrote. It’s always dusty and always windy because it’s west Texas, it’s the desert. Sitting there just sparked the idea.” Lambert’s vocals, sounding flawless as ever, channel the emotion in the song whilst the softness of the harmonies that Randall and Ingram add, take it to new heights. It’s certainly a highlight on the record and introduces us to the magic of Marfa. “That song really hits me” Jack adds, “It came from a deep source in the well, it’s about her life, it’s about my life, it’s about Randy’s life, and there’s lines in that song that we each wrote that mean a lot to all three of us.”

The Sound of Texas

It’s not just this song that captures the heart of the trio’s home state though. Having written and recorded so much of the album outside, Texas itself feels like part of the arrangement – another instrument the trio have used to bring the songs to life. “We were trying to capture what we hear when we write songs, you can hear the crackling of the fire and the cows, that’s all part of the magic to us” Jon says. Jack recalls “I woke up from a nap first trip I was there and it was just about to rain and JR had been sitting there watching the rain coming in from a hundred miles away. Out in west Texas you can see the storm coming in from a long way. He was just sitting there and he sang ‘Out in west Texas it never ever rains but when it does its Amazing Grace’. Miranda was there and we just looked at each other and said ‘Oh’ – that’s one of my favourites.” He laughs as he continues to think of his home state; “Texas is like an old pair of boots, the people around you say ‘they’re so cool, where d’ya get those?’ And you say ‘I’ve just had em, I don’t know where I got em, they’re just mine’ – that’s like Texas, really well made boots.” Though all three friends now reside out in Nashville, there’s something really special about Texas and the influence it has on country music as a whole.

It’s not the first time we’re hearing the friends collaborations, two of Lambert’s recent singles were written out in Marfa by the trio; the ACM Award winning Tin Man and Tequila Does from the Grammy award winning album ‘Wildcard’. Now we hear them again in a new light on the ‘Marfa Tapes’. Tequila Does breaks all the traditional rules of songwriting within popular music as it begins the verses in 3/4 time and the choruses are in 4/4 time. “We wrote it that way intentionally” Jon says, “If you think about it lyrically, it was to make the chorus more fun and to make the verses more Honky-Tonk. I like songs that give you more of a scene change and plus we were drinking Tequila when we wrote it!” he laughs. Jack adds, “It probably owes more to John Prine than anybody else. He was never afraid to change time signature. I think the first rule of songwriting is to throw out all the rules. Whatever you think a song is, if you play it for people and they get some kind of emotion out of it then it’s perfectly viable.”

Meanwhile Tin Man had an impact within country music and beyond that no one could have imagined. It’s tenderness and emotion captured the hearts and imaginations of country fans around the world. “Some songs as they’re going down, you get a feeling” Miranda begins, “You write the fun stuff and the songs that are in the middle somewhere, but there’s a renown within those really special songs where you look at each other in that moment, right after you’ve written it and think, we just did something big. And you can’t ever predict what that might be but it’s just knowing that it’ll hit hearts.” Jon adds “Even when you know that you’ve written something special, you never know what’s going to happen with that song. that song was really special to us but every song is your new baby. We knew we were at the top of our game with that so it’s great to see that it actually matters to people. That’s your reward for the hundreds of songs that never got heard.” Jack agrees as he thinks of the songs he’s written that have never been heard, “That’s the great thing about being on the other side of creating a song, for a certain amount of time after creating a song that’s your favourite. It goes out into the world and it either gets its own legs or it doesn’t. I can’t say I was surprised that people gravitated towards it but I’ve written too many songs to expect that kind of reaction.”

The passion the three friends have for each other and the songs they write is evident in this latest collection. “When we’re around each other, especially there in Marfa, words just start to sound like songs.” Jack muses, “We start talking and we stop thinking and it flows out like water.” Even during lockdown the friends managed to find ways of creating music together. “Jon and Jessi would FaceTime me, Jack would be texting and we’d play songs around the fire and we’d all sing along” Miranda says. Although they’re glad to have been able to meet up in Marfa as opposed to using technology to write! “I tried to do it once but it took the fun out of it for me. There’s a delay and it threw me for a loop so I decided I’d either disappear with people I know or suffer through it by myself.” Miranda laughed. Jon continued “I’m too much of that hippy trippy, needing to feel everybody’s energy in the room kind of guy. I did write like that once and realised the two people I was writing with were writing two completely different songs but thought they were writing the same song!” The friends continue to joke “I’m old school, I’m just figuring out zoom for interviews so I feel like that’s pushing it for me!” Miranda laughs while Jon quips “Miranda still writes lyrics on paper, she just quit using a chisel and stone a little while ago but at least pen and paper doesn’t crash right?”

This certainly won’t be the last we hear of this Texas trio as they already look ahead to the future! “One of the great parts about this record, is that it’s a side project for all three of us, so anything we do is going to be fun – we’re taking a long walk instead of sprinting into the next thing.” Jack says “I’m sure we’ll go out to Marfa again and write more songs, I wouldn’t be surprised if there was a Marfa Tapes 2, maybe do some dates but Miranda has a pretty full time job as does Jon and I.” Miranda chimes in “I hope there’s more volumes, if I know us then there will be. I’m working on new music and so is Jon and Jack.” The cogs begin to turn in Jack’s mind as he ponders, “You know where this thing would play well – right where you are. Every time I’ve been over in the UK, there’s an appreciation of singer songwriters that you don’t get here. You have a different way of listening.” Jon concludes as he reflects on the blessing of making this record with his friends “Hopefully our music will help everyone else get back on their feet, those who are struggling.”

The Marfa Tapes remind us what Country music is all about; the storytelling, the songwriting – capturing life in its rawest form. For the three Texans, despite the Grammy awards, the number 1 hits and the sell out shows, this is their proudest moment, and so it should be. “There’s been a lot of milestones, whether that was a number one record or winning New Male Vocalist of the Year ten years ago. My favourite song is always the next song and my proudest moment is always what I’m doing at the time, things I can hang my hat on. With this project it doesn’t matter who hears it, it’s out there, we did this and that’s really fulfilling.” Jack says before Miranda adds, “This is really unique and different, it’s brave. I mean we might be crazy but that’s what people like about us. This is something that I’m proud of, because I’m doing it with two of my heroes and great friends of mine, but also they’re amazing songs. I’m proud we didn’t doubt ourselves, we want people to hear these songs in the rawest form and we’re doing it. So for me it’s just a good notch on my belt as a person; we didn’t do this for career accolades, we did it for absolute arts sake, for each others sake and for the sake of the songs.” Jon concludes with a laugh, “Yeah, what she says!”