The power of positivity 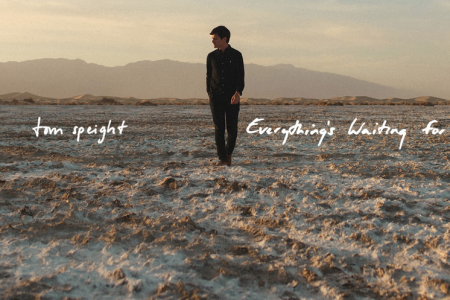 Tom Speight’s latest album, recorded last summer, is full of hope and positivity – just what we need as the UK edges closer to normality

Tom Speight is gearing up to release his new album ‘Everything’s Waiting For You’. The record oozes with positivity and hope, despite the difficult year we’ve all experienced. Partially recorded at Abbey Road Studio last summer, Speight has crafted a body of songs that we all need in 2021 – that encourages listeners to live life to the full.

The title track from the singer-songwriter’s latest offering has recently been playlisted on BBC Radio 2 and has charted on the UK airplay charts. “I wrote Everything’s Waiting For You in about an hour and I thought there might be something in this. I left it for a month, came back to it and just made a couple of tweaks and that was it.” Speight begins to divulge the secrets behind his songwriting success, “It generally starts with the chords and then the phrase. The best songs fall out of the sky, when you can’t really remember what was going on.”

Speight’s blend of folk and pop has helped him to develop a unique sound, but his storytelling lyrics have allowed him to truly connect with fans around the world. His early influences and passion for music was passed on to him from his parents. “My parents have a great taste in music so I grew up listening to The Beatles, Elton John, Simon and Garfunkel, Bob Dylan and thats still my music taste.” Tom begins, “When you hear my album, you’ll hear Simon and Garfunkel influences in the acoustic numbers such as See You Soon and at the end, on Shine With Me with the choral arrangement, it’s very Beatles-esque. I’m not a musical snob, I love all genres but my music taste hasn’t strayed since I was about eight.” He says with a laugh.

It wasn’t just his taste in music that Tom’s mother and father passed onto him. “I was given a guitar by my Dad and I began writing songs. I probably didn’t realise I could do music full time until I was at University, where I studied it and felt I was too far in at that point and didn’t have a plan B. I didn’t think it could be a career though. People say they want to be a movie star or a footballer, it always felt out of reach.” Tom remarks as he thinks about his journey to becoming a songwriter and with a number of health struggles in his life, Tom has fought hard to achieve his dreams. This past year has been no easy ride either with Tom testing positive for coronavirus just after christmas. However, despite the obstacles in his way, Speight has managed to release his most comprehensive and conscientious collection of songs to date.

“Hymn For Her was written during the pandemic. There was that time when it felt like the World was literally caving in because you had George Floyd and then the Trump stuff and I wanted to write a declaration of how I wanted to be as a human being.” That wasn’t the only song that got Speight thinking about the future and what he wants in life. Dive was partly inspired by his past but also looked to the future; “My parents broke up when I was a teenager and it was loosely based on walking past my childhood home. There’s lyrics like ‘Strangers living like 2.4’ so I was looking at the house when I walked past, thinking about how I used to live there and what these strangers were doing now. There’s an element of the album that is longing for love. So it’s loosely inspired by my childhood feelings of what relationships are and what I want moving forward.”

The recording process was an exhilarating process; “I hadn’t been in a studio in five months, I was so excited to make the album. Normally I don’t make records in the summer and I did this time and I feel that’s reflected on the record, it’s summery and hopeful. It was difficult logistically to get everyone in the studio. We recorded parts of the album at Abbey Road and they had a strict policy. Those first couple of sessions at Abbey Road though were the most fun I’ve ever had in a recording studio.” Speight says with a smile on his face.

Speight, who has wowed audiences in Brazil and America, is desperate to get back out on the road both abroad and here in the UK. “I’m most at home when I’m on stage, that’s the best version of myself.” For now Speight is content to make the studio his home as he will back recording before this album even hits the shelves!