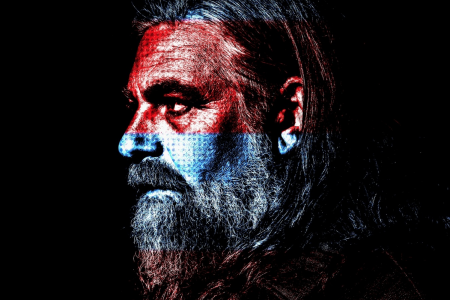 Can you tell me when you first knew you wanted to be a musician?

I was waiting tables, musically idle and killing time in San Francisco in my early to mid 20’s. I’d record songs on cassettes and give them out to friends and family for birthdays and holidays. Unbeknownst to me, people started duplicating the cassettes and they began spreading, organically. One cassette to cassette at a time. One of these recordings ended up in hands of Chris Malloy, who was making a surf/art film called “Shelter”. He called me out of the blue asking to use my song “Wrong” in his film. I played the premiere in San Diego and during my 20-30 minute set I was shocked to see people singing along to songs other than the one in the film. That was the spark, the push I needed.

Thinking particularly in the build up to writing and recording this record, what music was you listening to? Who has inspired you recently?

I was listening to a bunch of ELO. Enthralled by the arrangements and general lightness, and feel goodness of Jeff Lynn’s songs and production.

Tell me about the writing process behind this album?

I’ve always written everything on acoustic guitar. I got a synthesizer/keyboard over the pandemic. I began writing using different sounds. Piano, violin, trombone, etc… it opened me up to a whole new sonic world and allowed me to escape the trappings of my guitar playing. In the not knowing how to play the keyboard, it allowed me to just chase melodies. I only had three songs complete going into the studio. The rest were just loose ideas, fragments of songs. What I did have was a map laid out, in my mind, that knew where each song needed to go and the overall arc of the concept. Pressure has always been a friend to my songwriting. We recorded in succession, in order, beginning with the first song and ending with the last. So the lyrical narrative, following this antihero’s ups and downs of a calendar year unfolded as we went along.

Can you tell me specifically about the song, ‘Kingdom For a Fool’?

Seasons change as winter slowly starts its thaw. Our tilted, orbiting, earth, toys with our minds and emotions. Our hero finds himself trapped in the many cages of existence.  A terrible apartment, a stagnant 9 to 5 cubicle of monotony. One of the heard, following, losing, no way out…Wishing for a better life, convinced that nothing will change.

There is a unique visual interpretation to accompany the record, why did you decide to do that and how much fun did you have creating that?

I made an accompanying video/performance art piece for every song on the album. I broke the 12 songs into four acts. Giving four different directors, 3 song sections of the album. Each representing a season into the next. Act 1, winter into spring, Act 2, spring into summer, and so on. Then we put them all together to make a visual companion to the album. It was beyond fun and gratifying. I’d never been so involved and collaborative in the visual medium. I shackled the directors with not adding any story to the videos. Conveying emotion and mood and not get in the way or deviate from the lyrical narrative of the album. Taking my performance in each video to it’s emotional end. From cheeky, fun, absurdness, to love, to violence, to shame and to fear.

A few fun questions for you, what’s the strangest thing you’ve written a song about?

Oprah……. Patrick Swayze. Highly inappropriate. Never to be recorded. I used to write funny songs. Not so sure why I stopped. Don’t think my comedy is for mass consumption.

On stage are you completely focused or do you let your mind wander – what are your mid-gig thoughts?

I try to lose myself in songs and performance. That’s really the goal. Connect and feel the song in order to be felt. Rarely but sometimes I lose that and wander.

We are still dropping more videos in the coming weeks, Acts 2-4. We have plans to tour the Midwest and east coast early 2023. Then off to Europe as the year moves on. Opening, for the Boss in Rome Italy, in May.