Travis Tritt on his return to the studio 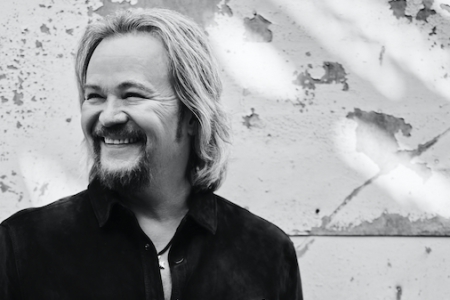 14 years after his last studio album, Travis Tritt is back with a brand new set of songs, ‘Set In Stone’

Travis Tritt hasn’t released any new music since ‘The Storm’ came out in 2007. However, for the past 14 years he has been busy on the road, enjoying his favourite aspect of the industry – live performance. Now, Tritt has made his way back to the writing room and recording studio as he navigates his way back to releasing his 13th studio album. “People said to me about this record is it going to be country or are you doing some blues or southern rock and I said all I know is it’s going to be a Travis Tritt album.”

Tritt fell in love with country music as a young child, “On Saturday nights in the sixties, we rarely turned the TV on because if the weather was fine my father would pull up two chairs outside and we’d listen to the radio – WSM coming to us live from the Grand Ole Opry” Tritt begins as he reflects fondly on those early memories growing up in Georgia. “Some of my earliest memories of falling in love with country music came from listening to that programme. My dad always had music on, driving around or on family vacations – country music was always playing. As I got older I like Southern Rock like Lynyrd Skynyrd and The Marshall Tucker Band. From that I got into blues, Ray Charles, BB King, Buddy Guy, Muddy Waters, Eric Clapton were all influences. If I was describe myself through music, country music is at the core but then there are equal parts southern rock, blues, bluegrass sprinkled with a bit of southern gospel – that describes me!”

He didn’t start playing music himself until later on in life though. “When you graduated from high school, you had two choices, you went to college which wasn’t an option for me or you went to work, so I got married and went to work for a heating and air conditioning whole sale in Marietta, Georgia. I worked my way up from loading trucks on the docks to becoming manager.” Travis reflects, “One night after work I went to a local bar and there was a guy over in the corner on a little stage with an acoustic guitar, a PA system and a drum machine and he was entertaining people Monday through Saturday. I had never seen that and was amazed by it and I kept thinking I could do that job.” A hard working Travis Tritt ceased the opportunity the moment it came along! “A few months later when he decided he was going to move to Nashville to pursue his own music career, I went to the manager and asked for his job. That went on for several months where I worked 7am – 6pm at my day job and then 8pm – 2am Monday to Friday and 8pm – 4am Saturday and that nearly killed me even as a young man. After a period of time I realised I was having more fun at my night job than my day job and surprisingly I was making more money. I quit my day job and never looked back since.”

It was just the beginning of what would be an illustrious career for Tritt. “I released my first single ‘Country Club’ in August 1989, my second was ‘Help Me Hold On’” that was Tritt’s first number one hit. “The third single was ‘I’m Gonna Be Somebody’ they were straight ahead country and I had no problems, but the fourth single was a song that was more of a tip of the hat to my southern rock influences, it was called ‘Put Some Drive In Your Country’ back in those days it wasn’t allowed in Nashville and country music.” The early 90’s were very different within the genre than what they are now, there was still an element of traditionalism about it. The heavy electric guitar sounds of ‘Put Some Drive In Your Country’ took people by surprise. “I received a lot of blow back and opposition, I had people at radio, at my label and at magazines saying ‘We don’t understand this guy, he’s a rebel, a non-conformist, bull-headed’ and then they hit me with the one that had the most impact – ‘Well he’s just an outlaw.’”

There was one artist that Travis Tritt looks up to that helped put his mind at ease. “To be honest I was worried about that up until I met Waylon Jennings, we were doing a show together and just as I was about to go up on stage he called me back and said I want to talk to you for a second, listen I’ve been hearing all the things they’ve been saying about you and they’re the exact same things they said about me, Willie Nelson, Johnny Cash, Hank Williams junior, he said those people don’t matter because they get their music for free, the only people that matter are the people who work hard to put food on the table, as long as they’re responding to what you’re doing, don’t worry about anyone else and I haven’t worried about it since.”

In the mid-nineties whilst flying high as a country star, Tritt tried his hand at acting too. “As a result of the success in the music industry, people approached me and said ‘we think you could act’ and I was like ‘really?’ So I gave it a shot.” Tritt recalls. “I was so nervous about it, that I over prepared, I’d go in and not only learn my lines but everybody else’s lines as well! When I came away from doing a film or TV role, I was more energised about the music, it was like going on vacation. I wrote better songs, I was more excited and happier because you appreciate how much easier it is to be a writer, musician and entertainer for me than it was to be an actor.”

Despite his success or in some ways, because of his success, Tritt decided to take a step back from writing and recording and instead chose to focus on the live aspect. “I had trouble moving from the writing phase to the recording phase to the performance phase. I wasn’t great at multi-tasking. I made a conscience decision to focus on the live performance part. I’ve been fortunate or lucky enough to have enough hits that I can do a ninety minute to two hour show just of my hits.” It was Tritt’s new manager that managed to convince Tritt to get back into the studio. “one of the first things he said to me was that you still have a lot of great music left in you, if you do that you’re not only feeding your loyal fans but you’re also possibly inviting in new fans that might not be so familiar with your catalogue.” Despite the accolades throughout his career, Tritt felt nervous about getting back into the studio, how had things changed in the past 14 years? “he brought up the possibility of working with Dave Cobb and I knew of him as he’s worked on so many great records in the past twenty years that I liked, Chris Stapleton, Jason Isbell, Sturgill Simpson, The Oak Ridge Boys, Brandi Carlile. I loved the way those records sounded. Dave said to me, I know a lot of things have changed over the years but this is how I do it, I take a live band into the studio and we record it all as live as possible and that put my mind at ease as thats the way I’ve always done it since the late eighties!”

Dave Cobb introduced Travis Tritt to a lot of new, young writers who he began to work with. One of his favourite collaborations was with Ashley Monroe and together they wrote Leave This World. “Ashley was such a pleasure to write with, I was looking forward to it. I love her from a lyric stand point but also her melody structure is so unique” Tritt begins. “The first session we wrote ‘Leave This World’ which talked about what a lucky guy I am to have been with my wife for as long as we have been, we just celebrated our 24th wedding anniversary. I wanted to talk about how much I enjoy and respect our relationship, its those day to day things that I don’t ever want to see end. We’ve had friends and family that we’ve lost in the past ten years and we always say to each other it’d be terrible if one of us left the other behind, wouldn’t it be nice if we could go together when the time comes. Ashley and I felt similar about the topic and it just wrote itself from there.”

Though Travis Tritt is excited for the world to hear the record which has been a long time coming for many of his fans, he’s also keen to get back out on the road again. “It’s like a drug, when an audience responds to you live. The energy that gets passed back and forth between the stage and the crowd, its like a big beach ball. It’s like a different world on stage. Every year except last year I’ve done 135 shows on average each year. What we’ve seen in these past couple of shows is that not only am I hungry to get back out there but the audience is hungry for it too. People treasure those experiences for their whole life.”