Ty Herndon: Till You Get There 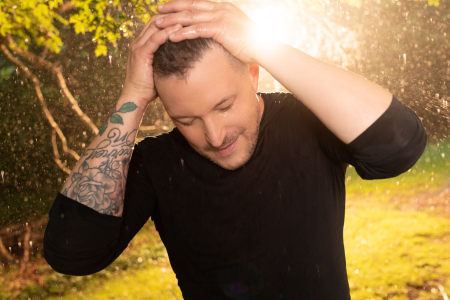 Ty Herndon burst onto the country scene in the 80s as a member of the Tennessee River Boys but it’s been a tumultuous ride for the Mississippi native who’s first number one, ‘What Mattered Most’ came in 1995 after a stint performing jingles for the likes of Pepsi. Earlier this year, Herndon released an album, ‘Jacob’ which was his most personal record to date as he opened up about his battles with mental health and addiction.

Through everything though, Herndon has always been acutely aware of what an asset his voice is both literally and metaphorically and it was realised at an early age. “I grew up in a musical family – bluegrass and gospel. My grandmother, from the time I can remember, she had a weekly show on WP RN radio show that my mother and her sisters would sing live on. I was standing on boxes singing, probably as early as four years old. That’s a gift that’s put in you and I thank God for that gift. Because it’s been the one thing that’s been consistent in my life, through many ups and downs. That has always remained consistent, oddly, I always cared for it more than anything else. I’ve had a past with addiction but my counsellor said, I don’t think we’ve ever met anyone that actually was conscious of their vocal chords in such an awful time.”

Herndon grew up in the confines of the church was exposed to a lot of christian music. However, he spent his childhood listening to country music with his Grandma. “My Grandma had a four foot high, three foot wide AM radio. It was set up in the living room. There was television, all that stuff, but we would gather around on Saturday evenings and listen to the Grand Ole Opry.” Early on in his career, he’d have a full circle moment when he was able to perform on the Opry with his Gran in the audience. “It was my Grandma’s 80th birthday, I was 19. She came to Nashville and Roy Acuff had asked me to be on his portion of the Opry. She was sitting on the stage, if you’ve been to the Grand Ole Opry in Nashville, you can actually sit on the stage sometimes. She stood up and waved at the crowd and they sang Happy Birthday to her. So that was a full circle moment for me really early in my life. I don’t think I appreciated it as much as I do today.”

It would be a while between that moment to Herndon releasing music under his own name through a label. “I was actually I was 31 years old. When I got my first recording contract, and I had gotten really comfortable playing the clubs in Texas,” he reflects. “I’d moved out to Texas when I was 20 years old and I did a show called Star Search. I went all the way to the end on that show but didn’t win. But I couldn’t get a recording contract, at that time in Nashville I was actually considered old. I was considered too old at that time. I mean, my goddaughter, LeAnn Rimes was getting her record deal, she was 12! But I was really comfortable. I was making good money in the clubs, and I had just won Texas Entertainer of the Year.”