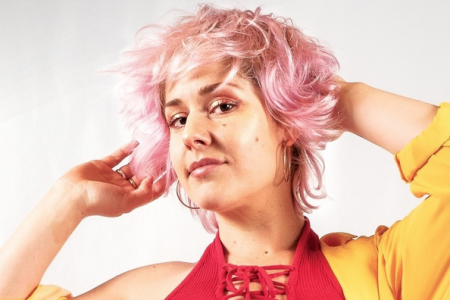 VISSIA’s enchanting new album ‘With Pleasure’ gave her chance to write, record and release music in a way she hadn’t before

Canadian songstress VISSIA has been busy setting up a home studio space to live-stream from during the last fifteen months. Her album ‘With Pleasure’ recently dropped to rave reviews, her enchanting yet nostalgic, pop infused sound has garnered support at home in Canada as well as across the pond here in the UK.

For VISSIA, music was always about the human connection and common ground, something which she tries to focus on in her own projects. “I grew up on country music, The Chicks were a big influence for me because I have two sisters so it was like seeing yourself represented” she begins. “There was also a Wilson Phillips cassette that was very beloved and the insert was tattered and torn because my sisters and I would need to open it up and see the three girls because we were three girls! I think back on how powerful that is.” Music was always a huge part of the three girls lives and VISSIA was eager to perform whenever and wherever she could. “Growing up there was always music on in the house, anything from Neil Diamond to The Beach Boys and a lot of 90’s country. Being Canadian I liked Shania Twain too. I remember a lot of disney sing-along cassettes, Lion King was pretty huge.” She continues, “My first experiences playing in front of an audience were in care homes but having that outlet for expression, being able to get up on stage as a kid really sparked something.”

VISSIA, though still entertaining fans online, took the time away from touring to explore creatively within her soundscape and songwriting. “I always used to start with lyrics first, I wanted to get everything down that I wanted to say – I was a perfectionist – then melodies would come later. Nowadays I’m going the other way, I’m more inspired by a musical idea first, once I’ve got the vibe of a song going and some sort of groove.” The exploration didn’t stop with VISSIA’s writing, it filtered through to the recording process too. “It was different with this record. In the past I’d collect songs over a few years and even play them out on tour, before recording them, but everything was fresh and brand new for this record, which is sort of where the title comes from. I just wanted the experience to be pleasurable and have fun being curious with the creative process.” And if the writing process wasn’t pleasurable, the listening process certainly was!

Standout track The Cliffs features a gripping chorus whilst VISSIA’S angelic vocals are at their best. “The Cliffs is based off a piece of writing that I did. It was sort of a plutonic love letter to a friend who had been going through some really big changes within his relationship. Sometimes big changes get you thinking ‘I don’t want to do it, I’ll just stay where I’m at’. So The Cliffs was taking that piece of writing and distilling it into a song form but the first couple of lines in the song are exactly what I said in the letter. It’s saying, ‘I know this is really hard, but we all do the hard things, we’ve all jumped off the cliff. You never find out if you can fly if you never take the leap.’”

After spending so much of the past year cut off from friends and colleagues, many of us are looking forward to working alongside each other again and that’s no exception for VISSIA either. “So far I mostly write alone. I’ve done some co-writing and I definitely see myself doing more of that. I’d like to produce other artists too, I think collaboration is so magical especially if you meet the right person where you vibe together, passing the ball back and forth.”

VISSIA is excited to get back out on the road again, despite the fun she had live-streaming shows to her fans. “It’s going to be interesting when I get to go on a stage in front of live people again. I’ve been doing a lot of live streaming and after getting over all the technological problems, it gave me chance to be more relaxed but I’ve noticed my mind goes to a lot of different places. Not so much when I’m in the middle of a song but in between songs I’m like a magpie who sees something shiny and then says ok I’m going to talk about that now! I’m booking some local shows over the summer which is surreal. Looking further ahead, I’m hoping to tour Canada and hopping across the pond and heading to the UK to tour. I’m also planning to write a lot over summer and dig deep creatively for the next project.”