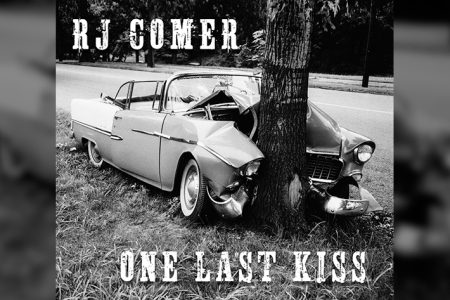 Thirty years ago Chicago-born RJ Comer abruptly withdrew from music school and gave up on his dream to be a musician.  Dark years of violence, addiction, poverty, fractured relationships, and suicide attempts followed, culminating in a come-to-Jesus weekend in a Mississippi jail.  RJ straightened himself out (mostly), worked his way through college, earned a full scholarship to law school, and became an attorney.
He thought he was done with music, but music wasn’t done with him.  Eight years ago, while a partner in a Los Angeles law firm, a band RJ started for kicks got signed.
RJ stormed back into music, fusing his love of roots and blues in two band LPs, two solo EP’s, and several songs for film.  Now a full-time musician living in the Tennessee woods, RJ’s toured from Canada to Florida and throughout the U.S., earning official showcases at SXSW, Canadian Music Week, and various songwriter’s festivals—steadily garnering critical acclaim and building a fanbase.
One Last Kiss is RJ’s first solo LP—a collection of songs from a man who transcended hardships few people escape.  RJ’s songs are both conversational and poetic, deftly straddling traditional and contemporary Americana and Blues.  With a baritone voice that can be powerful, ragged, or soothing, RJ shows the emotional and experiential range of a man who once only knew how to fight or flee, but slowly learned to live and prosper, and eventually learned to love.
Some Nashville notables contributed to One Last Kiss, creating a primarily acoustic sound that is classic but never stock, and is always distinctly RJ.  Grammy-winner Randy Kohrs—renowned for his work with talents as diverse as Jim Lauderdale, Dolly Parton and Dierks Bentley—shows the full range of his abilities on One Last Kiss, from the insane resonator solo on the hallucinogenic “Desert Mama” to his swaggering riffs on “Bad Day in Paradise.”  Fiddler Daniel Foulks from the Parker Millsap band adds his signature freight train fiddle to joyful tracks like “Under a Lover’s Moon” and quietly mourns with RJ on the bluesy ballad “One Last Kiss.”   Foulks also leads the fiddle & cello duo fluidly accompanying RJ’s longing and regret on “If I Could be Water”—achieving a sound that is at once profoundly intimate and yet also cinematic.
One Last Kiss was produced by Shawn Byrne in his Nashville studio. One of Nashville’s most sought out multi-instrumentalists and a SESAC Writer’s Award winner, Shawn is also gaining a reputation as a producer—having trained under the guidance of Grammy winning producer Nathan Chapman.
Byrne’s challenge was to create a musically coherent sound for an album that includes joyful love songs to a song about the kiss of death and for a singer that belts, growls, and whispers.  Around an acoustic backbone of percussion, fiddles, guitars, and harmonica, Byrne fleshed out the sound for each song by selectively incorporating cello, keyboards, mandolin, electric guitar, or accordion.  The result is a sound that preserves the timeless qualities of acoustic Americana & Blues, invokes the open space of rural life, but is updated for the increasingly urban 21st Century audience.
“Every day people may find a lot to relate to in this record and will hopefully be entertained and inspired.” RJ says.  “I’m a guy who loves my wife of 22 years, drives a truck, and lives in the forest.  But I once abandoned my dreams and was on my way to being a young corpse or an old inmate.  Instead I made a success of my life and was given a second chance to make music.  All that is in this record.”