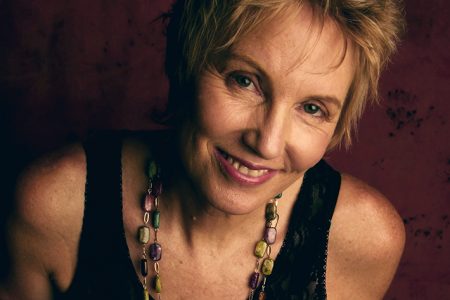 Renowned folksinger Eliza Gilkyson will release her 20th album, SECULARIA,on July 13 via Red House Records. Gilkyson’s music, in the classic folk music tradition, has always offered a vivid reflection of the times we live in with each song a window into a world of struggle and beauty in a culture she feels is “caught somewhere between collapse and reinvention.”  The follow-up to her GRAMMY-nominated 2014 release, The Nocturne Diaries,SECULARIA is a collection of spiritually charged songs that do not fit within the parameters of traditional religious beliefs, challenging us to embrace a more inclusive perspective, to respect all life and to be accountable for our actions in these divisive times.
The album features a stunning performance with the internationally acclaimed Tosca String Quartet, (David Byrne, Bob Schneider), vocal cameos by Shawn Colvin and gospel singer Sam Butler,and a duet with her friend, the late Jimmy LaFave,as well as two songs adapted from poetry written by her grandmother, Phoebe Hunter Gilkyson,co-written with Eliza’s father, folksinger Terry Gilkyson. Recorded with what she calls a “spare urban folk approach,” the album features songs of grief, gratitude and wonder.  As always, she’s assembled a group of some of Austin’s finest players to back her in the studio: Chris Maresh (Eric Johnson), Warren Hood, Kym Warner (The Green Cards), Andre Moran, Mike Hardwick (Jon Dee Graham, Charlie Sexton), Betty Soo and more.
The concept that evolved into SECULARIA has been percolating for years. Gilkyson is a daughter of the feminist movement and the project is equally inspired by the writings of the movement’s early pioneers and today’s #metoo movement.  Feminist pioneer Mary Daly wrote in 1973, “If God is male, then male is God. The divine patriarch castrates women as long as he is allowed to live on in the human imagination.” Like many women living in 21st century America, Gilkyson is questioning the patriarchy that has for so many centuries fundamentally shaped society.
“How much of my life has been built around the gender roles assumed in the God-as-Man theology?” Gilkyson writes. “How did that primal patriarchal assumption play out in my search for self-awareness, love, and acceptance in my personal life and ultimately in my music?  How has it played out in the degradation of the natural world, the ever-present wars, violence against women, human suffering, the potential end of everything? These songs were directly inspired by a new way of understanding myself as a woman in the context of a culture going through a massive overhaul.”
“Solitary Singer,” the opening track, features lyrics by Phoebe Gilkyson and music by Eliza’s father, Terry Gilkyson. The song became the title of a weekly folk-music themed radio show he hosted in the late 40’s for the Armed Forces Radio Network. “The song bears witness to the profound harmony of the natural world, the antithesis of music tied to an industry, and the foundation upon which I was raised,” Gilkyson says.
The second track, “Lifelines,”celebrates the coming together of like-minded people after the last US presidential election. “I became acutely aware of a network of individuals all over the world who were mourning, processing and ultimately gearing up to fight back with all their hearts and souls, like lifelines of light connecting to me and to each other, comforting then and even more so today,” Gilkyson says.
Other songs explore the overarching theme of a “new spirituality” that is evolving outside of traditional religious structures, including Eliza’s moving current take on the traditional gospel tune“Down By the Riverside”sung with her longtime friend, the late Austin artist Jimmy LaFave, that was recorded just a few months before his passing, as well as a duet with Shawn Colvin on the song, “Conservation,”with lyrics and music adapted by Eliza from another of her grandmother’s poems.
“The fall from grace and redemption of the soul in these songs are less about a deity or afterlife, or a heaven and hell than they are about the very human story of losing and finding oneself within the span of a lifetime, which is all I know for certain that I’ve got. Woody Guthrie said, ‘My religion is so big no matter what you do you’re in it and no matter what you do you can’t get out of it…’ Gilkyson says. “He also said, ‘Earth is God’s everything.’ He conveyed all that depth in just 29 little words.”
Eliza Gilkyson is a two-time GRAMMY-nominated (2006/2015) singer-songwriter and activist who is one of the most respected musicians in folk, roots and Americana circles. Her songs have been covered byJoan Baez, Bob Geldof, Tom Rush and Rosanne Cash and have appeared in films, PBS specials and on prime-time TV.  A member of theAustin Music Hall of Fame and Austin Songwriter Hall of Fame, she has won countless Folk Alliance and Austin Music awards, including 2014’s Songwriter of the Year.  She’ll be announcing North American tour dates soon, both a a solo artist and with Three Women and the Truth (Eliza, Mary Gauthier and Gretchen Peters); go to http://elizagilkyson.com for updates.