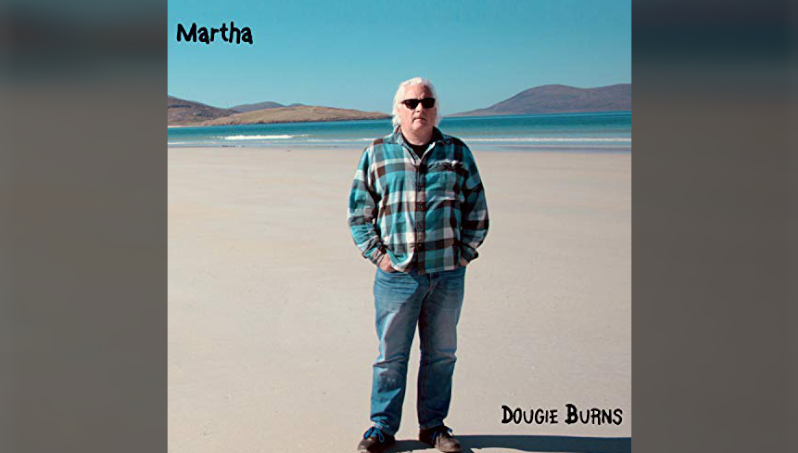 Looking back at one of our summer issues from 2020, here is a review of ‘Martha’ by Dougie Burns, which featured in the May/June edition

DOUGIE BURNS
MARTHA
Self-released
7/10
Journalist turned musician delivers with aplomb
It’s likely that no-one could win an argument with Dougie Burns in a way – if he were to ever critique someone’s work and they didn’t like what he said, to the point they went, ‘well why don’t you try?’, he can point at this! For the last 15 years, Burns has been touring around and playing his songs, supporting the likes of Seasick Steve, while he also puts on a monthly exhibition for singer/songwriters from the Velocity Café in Inverness, Scotland. To say music runs through him would be an understatement and that is hugely evident on his latest record ‘Martha’, which is dedicated to his mother. The Americana infused collection has a number of top tunes on, such as Keep Your Mad Hat On, Silver Dollar and Shrine, with Burns merging in classic honky tonk, elements of classic country and of course, that Americana influence as well. All things taken into consideration here, Burns has released a very, very good album that further magnifies the talent that is at his disposal. Not everyone can do it, of course, but Burns has found a way to do it and sound very good in the process.
Fred Underhill
www.dougieburns.com

King of the blues Bonamassa runs the gamut from blues-rock to cool 40s and 50s dancehall blues to country-blues, always with a rootsy edge. Here

Guitar and production genius Edmunds was doing roots rock before most people even thought of it, with 1970 transatlantic hit I Hear You Knockin’, producing

MDC are, of course, Brit husband and wife team Michael Weston King and Lou Dalgleish who have intelligently and beautifully reinvigorated the country duet over

Nineteen albums and 292 tracks, this box set rocks and rolls through 40 colourful years. Many listeners didn’t see much beyond his hits and Top

Review: Mark Viator and Susan Maxey ‘Where The Road Leads’

The Dinallos The Dinallos Memphis International Records The lead off single from The Dinallos is Kilimanjaro, what’s glaringly obvious is the high end arrangement and

Review: Steve Yanek ‘Across The Landscape’

Review: Phil Hooley ‘Songs From The Back Room’

Phil Hooley Songs From The Back Room Phil Hooley, frontman and founding member of alt-country band The Woolgatherers, has teamed up with former Nashville drummer

Review: Parker Millsap ‘Be Here Instead’