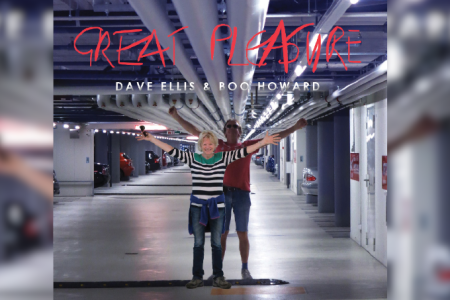 Dave Ellis & Boo Howard
GREAT PLEASURE
Doghouse Records
***
A long and winding career still going strong…
Dave Ellis is a seasoned performer who has been making records for more than forty years and has had a few brushes with fame along the way. His first album, imaginatively titled ‘Dave Ellis Album’, released in 1973, was seen at the time as an acoustic classic and saw him touring with the late great Bert Jansch and appearing on the legendary ‘Old Grey Whistle Test’.
His prowess on the acoustic guitar at that time saw music rag Melody Maker declaring that he was “one of the six best guitarists in the world”. Since then, he’s released nine albums and toured consistently and recently had some songs featured on US TV show ‘Wet Hot American Summer’.
He was joined in 2000 by Boo Howard and together they have an agreeable, if a little bland, sound. The album kicks off with a bright and breezy Great Pleasure, which has a nice open sound and a positive message about getting along with people and being nice – and, in our cynical messed up world, what could be better?
The arrangements on the songs are simple and straight forward and nothing really leaps out at you. The music here is rooted in folk with a pop slant buried somewhere in the mix.
The musicians are, for thermoset part, laid-back and understated. However it’s all pleasant enough and there’s no doubt that Ellis is a fine guitar player and Boo Howard has a sultry melodic tone to her voice that pulls you in.
Perhaps the most interesting quality on display here is the fact that whilst the music is sweet and the melodies are charming the lyrics really do have some bite. Walking Wounded sounds gorgeous, but the tale of sadness and loss belies the sweetness.
Likewise, Refugee has a sweet languid guitar figure and Howard’s voice is again lovely, but the lyric is full of a shimmering anger at the way the west is dealing with the refugees fleeing their homes right now.
This is one of those albums that sounds pleasant enough in the background, but you’ll need to listen really closely or it won’t pull you in for repeated plays. If you make the effort to engage with the songs songs over the music, it’ll repay your best attentions – so go on, give it a go.
www.daveandboo.com
Greg Johnson