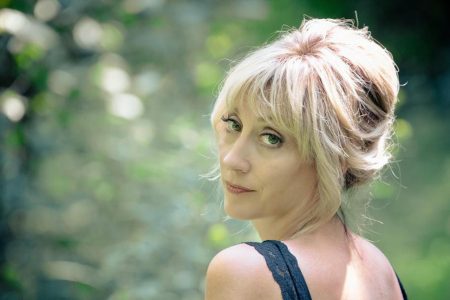 Singer-songwriter Amy Speace got her big break in music when she was spotted by Judy Collins. She didn’t actually start writing music until she was about 28 years old; she had enrolled at college to study English and Theatre but was still unsure of her future path in life. “I didn’t know what I wanted to do, I had all this performing in me. I was a musician, I played the piano when I was three and sang, I thought I wanted to be an opera singer for five minutes, because I love opera and I love the passion, but I have never met an opera singer who was really happy, loose and free.” After college Amy attended the National Shakespeare Conservatory to study acting but found that she ended up having to take a lot of sub-par acting work to make a living, this disappointment helped steer her towards music and her eventual calling. “At the time I started writing music I was living in New York City as an actor and a director, I just started playing open mics and I think maybe it was part real hard work and part blind faith that I was at a coffee house when Judy Collins heard me. I really was undeclared at that point, like all I knew was that I had to be on stage and I had something to say, but wasn’t sure what it was, or how? Whether it was to be as a play writer, or a songwriter, or an actor, no idea? Then Judy saw me and she told me how I reminded her of herself at a young age. Then I was able to open up to her and say: “I’m not sure how to do this and have a career?’ and she just said: “You have it, just keep going.’ I think that was the turning point for me, so it kept me going. It actually was the moment that I decided that I am a songwriter and singer and this was what I wanted to do for the rest of my life.”

Amy’s albums tend to draw on what is happening to her at the time of writing the songs. THE KILLER IN ME followed a divorce and LAND LIKE A BIRD was written just after moving from New York to Nashville about two and a half years ago. “My album THE KILLER IN ME was really me trying to make sense of my divorce. I was married for 10 years, he’s a good friend of mine but never was my soul-mate and I think a lot of people find themselves there. I think I was trying to do the right things for much of my life. That record was like an exploration of that stage of my life, as in I am no longer 20 so how do I shed all of this and get out of this without hurting anybody. So when I finally did emerge from that I was living by myself and it is like when you are desperate to kick down a door, banging your head against the door, then somebody opens the door behind you and says “no, come to here’ and that is what happened with Nashville.” “Over the years I have been going to songwriter festivals in the States and I needed a Nashville songwriter to say that I need to be in Nashville. I had angels all over the place, songwriters like Jon Vezner who became a mentor of mine, so did Judy [Collins] and Beth Nielsen Chapman. Then I randomly ran into the guy who runs my label, who heard me and just said: “I want to work with you and you really should come to Nashville.’ He introduced me to this whole sort of sub-culture of Americana singer-songwriters in Nashville. I felt so at home I moved there on a whim, like two weeks later my van was packed and I was gone. I left behind my whole family, an ex-husband, my label and management and started all new in Nashville.”

This led nicely into her next album LAND LIKE A BIRD, which is centred around leaving people and places close to her and it has a few songs that say goodbye. “Manila Street was a street that I lived near in Jersey City, right across the river from the Trade Towers. That whole episode was a turning point for me, so when I lived across from that area, this one street I would have to go down on the way to the subway train to get into Manhattan, where I played music and worked. It was a kind of ugly block of houses, but they had woven these roses through the chain link fences that surrounded these graffiti clad concrete block buildings. I had been touring and I came home and they had burst into bloom and when I was moving and letting go of relationships and people in my town, that was the image I used to write that song, the idea of flowers and things just coming and going, the idea of permanence…everything changes, just kind of owning that and using that metaphor.” “I think Had To Lose was a kind of resignation to moving on, I feel like it is a hopeful song. The first line is “As I lose the love of my life I had to lose,’ sounds really sad but the whole song has this sort of uplifting thing about you had to do it, to get where you are you have to let go of some things that are painful. That is why I chose Galbraith Street which is Ron Sexsmith’s song, I feel like it comes right out of my song Had To Lose, I love Ron’s song as it is about letting go of childhood.”

The other tracks on the album covered the other part of moving. “I think what happened was I was letting go of love as I was falling in love, but I wasn’t sure it was going to work or not, that could be a metaphor for Nashville, it could also be a person. I was just thinking about falling into something new and taking a leap of faith, that you have no idea how it is going to end, you have to resolve yourself to the fact that if it doesn’t end well it was still a good choice, that is what the record is all about to me.” LAND LIKE A BIRD is a beautifully crafted album woven with tender and at times thought-provoking songs, one that especially caught my ear was Ghost and Amy happily explained what she had in mind when writing it. “I had an image of when you are in love and someone is with you and then they leave and don’t come back, that scent that they leave behind, the impression in your furniture. You look over to the couch and they are not there, then you currently don’t know what to do with that? Which reminded me of my grandmother, my mum’s mum was pretty much my biggest angel that has ever lived, she died when she was 103 years old, she got me my first guitar, she found me playing guitar at the age of three, she bought me books, she bought me poetry, she spoke Proust in French until she passed away, she was a brilliant artist and nurse. She was the person in my life that encouraged my artistic side, as long as I knew her she was this solid single woman, because she had been born to a family of 18 in the early part of the 1900s, Irish catholic.” “All of her brothers and sisters were priests and nuns and so she had to take care of her parents as they got older, as she did she stayed home and she fell in love but wasn’t able to leave to marry him, so she waited about 15 years to marry my grandfather, they had a long engagement and then when they got married he died not long after they had my mum. So her whole life was about this greatest love of her life that didn’t actually exist, for me he was a ghost and there is a lot about him that I feel connected to but I had never met him. So I always thought of him as this vapour that snuck in the back door every once in a while and my grandmother passed away saying his name, so he was real present in my life. I thought about how do you sustain love when it is not actually there, I mean I have been in love with somebody I could not be with and it does not change the fact that you are deeply in love with that person, you grieve the possibility and hope for the chance and it reminds of love that has passed away, so that was the story.” Amy has now released HOW TO SLEEP IN A STORMY BOAT that covers learning to live and cope with the various forms of grief. It is a superb album full of powerful and passionate songs. Perhaps to be discussed in a later interview? David Knowles