Ana Cristina Cash Releases The Tough Love EP; Part I of Future LP Out this Summer 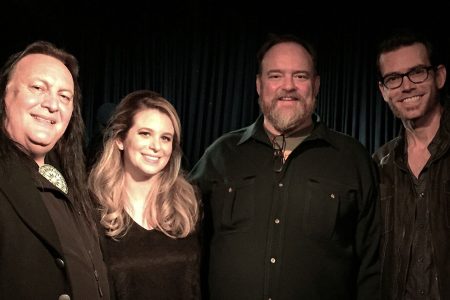 Soulful singer-songwriter Ana Cristina Cash has released her latest project, THE TOUGH LOVE EP, featuring co-written material with husband and producer, John Carter Cash. This highly anticipated body of work provides a taste of what is to come on Cash’s full-length album, available this summer.
“I am so proud to have recorded The Tough Love EP at the historical Cash Cabin Studio in Tennessee, where so much amazing music has been recorded over the past decades,” said Cash. “This music is true to my heart, an offering from my very soul. And there is more to come!”

THE TOUGH LOVE EP  showcases Cash’s vocal range with brilliant ease and rootsy soul. The title-track, “Tough Love Woman,” written with master songwriter Shawn Camp, displays the seductive energy, distinct creativity, and empowering voice that Cash acquires as an artist.
Cash recently held a release party at Nashville’s Douglas Corner in which she performed THE TOUGH LOVE EP  in its entirety with a six-piece band. Cash also peppered the set with songs from her previous album THE WEST COAST SESSIONS. For an encore, John Carter Cash hopped on stage for a duet of his “mama and daddy’s music” including “Jackson,” “I Got Stripes,” and “Will the Circle Be Unbroken.”
Ana Cristina Cash was born and raised in Miami, FL. Her parents moved to the United States in the early 1960’s from Cuba during in the midst of the revolution. Throughout Cash’s youth, she was exposed to music from many different genres. Her material exhibits a broad vocal range from an expressive and resonating contralto to an amazingly high coloratura soprano, known to some as the “whistle register”.
Cash, who is bi-lingual, started her professional music career at 6 years of age, quickly becoming an accomplished champion of the singing contests on the variety show, “Sabado Gigante”.  At the age of 16 she signed to Sony Music’s Latin division and released her first album, Ana Cristina, in the Spanish language. In 2005, Cash became the first Hispanic in history to perform the “Star Spangled Banner” at a Presidential Inauguration. She was invited a year later to perform at the White House and sing for the President of the United States, the Crowned Prince of Spain and other notable world ambassadors.
Cash married music producer John Carter Cash on October 29, 2016 and currently resides in the greater Nashville area.