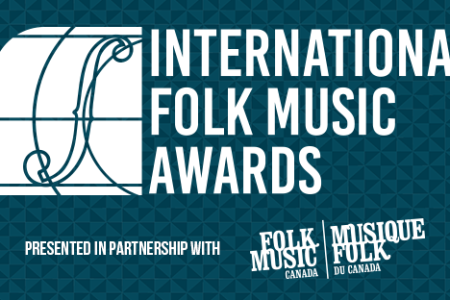 The awards show, which included a live-streamed broadcast and was presented in partnership with Folk Music Canada, opened with a ceremonial land acknowledgement by Ed Smith, a leader from the Osage Nation.

The evening included celebratory reflections from FAI Executive Director Aengus Finnan, and the screening of a new 30-year retrospective short film about the organisation’s history.

Three-time Grammy Award nominee Ruthie Foster emceed the evening, which featured performances by Guy Davis, Giri and Uma Peters, Anais Mitchell, and The Staley Falcon Chorale. The evening ended with a full-cast finale performance of “Goodnight Irene” with the full audience singing along.

Throughout the evening, awards were presented for Lifetime Achievement, Spirit of Folk, and member-voted ‘Best of 2017’ (including Album, Song, and Artist of the Year). In a permanent commitment to honor the socially conscious roots of folk music, the People’s Voice and the Clearwater Awards were also awarded. Three inductions were made into the Folk DJ Hall of Fame.

Folk Alliance International (FAI) is a registered nonprofit based in Kansas City, Missouri. Founded in 1989, FAI is an advocacy, professional development, and networking organisation that produces the world’s largest conference of the folk music community and industry. Finalists for the 2017 Album, Song and Artist of the Year awards are based on U.S., Canadian, and International industry year-end lists as well as Folk DJ airplay. Winners are determined by the voting membership of Folk Alliance International and the results are announced annually.