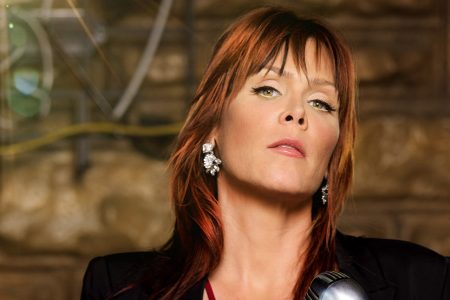 Beth Hart is on fire. Right now, the Grammy-nominated singer/songwriter is riding a creative tidal wave, firing out acclaimed albums, hooking up with the biggest names in music and rocking the house each night with that celebrated burnt-honey voice. In 2016, the headline news is Beth’s latest album, FIRE ON THE FLOOR (out 14 October on Provogue/Mascot Label Group): a release that even this fiercely self-critical artist describes as “pretty frickin’ good”. But let’s not forget the backstory that brought her here…

FIRE ON THE FLOOR  is sure to build on her breakneck momentum. As the singer explains, this latest record gave her an emotional release following the bitter-sweet sessions for BETTER THAN HOME. If there’s a theme that ties these twelve songs together, it’s a sense of escapism following the hardest of times. “We were still in the mixing stages for that album and I knew I had to make another record. Making BETTER THAN HOME  was so painful, because one of the producers, Michael Stevens, was dying of cancer. It was a very emotional record to write and to make. I wanted the songs for FIRE ON THE FLOOR  to get born real quick.”

Take a spin of FIRE ON THE FLOOR and  you’ll find everything from the spring-heeled soul of Let’s Get Together to the brittle rock of Fat Man. “I love that song,” she says of the latter. “That’s actually a co-write with a wonderful songwriter named Glen Burtnik, who I started writing with when I was about 24. We wrote that seven years ago – just a basic skeleton – but then I got super-inspired and wrote out the lyric. It feels good to sing it. That’s what’s so great about rock ‘n’ roll. It’s just such a fantastic way to let out your angst.”
Likewise, the title track: “I love Fire On The Floor. It’s just smouldering. I think it’s gonna be a fantastic piece to perform live. It’s filled with passion. It’s about when someone you know is so bad for you, but you can’t help it. Then there’s No Place Like Home. I love that song. It’s about how, like, you spend a lot of time on the road, and you start to realise all the great things about being home. Kinda the opposite to the song Better Than Home.”
FIRE ON THE FLOOR  is the album that Beth Hart needed to make. Likewise, it’s a record that you need to hear. “I’m so pleased with it,” she concludes. “I recently had to organise the sequence of the record, and while I was doing that, I was thinking to myself, ‘Y’know, this is pretty frickin’ good…!’”
Upcoming tour dates:
2016
11th Nov – Symphony Hall, Birmingham, UK
13th Nov – The Sage, Gateshead, UK
14th Nov – O2 Academy, Glasgow, UK
17th Nov – Colston Hall, Bristol, UK
19th Nov – Solent Hall, Bournemouth, UK
21st Nov – Bridgewater Hall, Manchester, UK
23rd Nov – Royal Festival Hall, London, UK
26th Nov – Heineken Music Hall, Amsterdam, Holland
28th Nov – Ancienne Belgique, Brussels, Belgium
30th Nov – Splendid, Lille, France
2nd Dec – La Traverse, Cleon, France
3rd Dec – Theatre Femina, Bordeaux, France
5th Dec – La Cooperative de Mai, Clermont-Ferrand, France
7th Dec – Le Pasino, Aix-En-Provence, France
8th Dec – Salle De L’Etoile, Chateaurenard, France
10th Dec – Le Plan, Ris Orangis, France
13th Dec – Olympia, Paris, France
15th Dec – Megarama, Casablanca, Morocco
2017
6th Feb – Keeping The Blues Alive at Sea III, Tampa, US
12th May – Haus Auersee, Leipzig, Germany
14th May – Colmbiahall, Berlin, Germany
16th May – Laeiszhalle, Hamburg, Germany
18th May – Theater am Aegi, Hannover, Germany
20th May – Kurhaus, Baden-Baden, Germany
22nd May – Capitol, Offenbach Am Main, Germany
24th May – Historische Stadthall, Wuppertal, Germany
29th May – Circus Krone, Munich, Germany