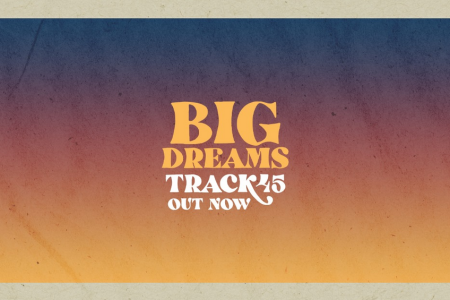 As their latest single Met Me Now goes to radio, the sibling trio reflect on moving from small town life to Music city in pursuit of their ‘Big Dreams’.

Track45 enjoyed their small town life in Meridian, Mississippi. It was where they learnt the tools of their trade, how to play, how to harmonise, but also what it means to be a close knit family – something which is an integral part of the country music genre and part of their identity as a band. Their first EP ‘Small Town’ came out towards the end of 2020. It told the authentic story of the sibling’s upbringing, laying down some roots for the group who have, for so long, been hidden in writing rooms honing their craft and telling other people’s stories. Just a few months later and their second EP ‘Big Dreams’ is garnering lots of positive reviews as it continues the story of the group who swapped their small town life for the big city.

Growing up Jenna, KK and Ben were exposed to a lot of different music “Grandma taught us how to play piano and Grandad was our church choir director so music was always around our house.” KK begins. Meanwhile on long car journey’s their parents were playing classic rock and The Beatles; “We were so obsessed with the Beatles we tried to sing in British accents for a little bit” Ben laughs, as he tries to answer my questions in his best British accent! However the trio searched for their own tastes too Ben delved deep into the pop music he heard on the charts, exploring its songwriters, “I was very into the songs Max Martin wrote, songs like Teenage Dream by Katy Perry.” KK developed a love of Soul and Rock n Roll music “I was obsessed with Elvis, so much so that I had a blue fiddle which I named ‘Suede’ after the song ‘Blue Suede Shoes’”. Meanwhile Jenna drew influence from Dolly Parton, George Jones and Tammy Wynette; “For a while when I was about six I would walk round town singing D.I.V.O.R.C.E. and eventually my Mum would say “You’ve got to stop singing that when we’re out.”

While the trio explored different genres, they took up different instruments too and began playing together, “We started out playing all the nursing homes round town! Our first real gig was at Dollywood, we did a Bluegrass and Barbecue festival there – four shows a day and that’s when we decided we wanted to pursue music together.” KK looked back fondly on those early performances. Although live shows are a big part of what they do, especially with those harmonies, much of the trio’s success has come from their ability to craft beautiful lyrics and killer hooks. Ben says, with a grin, “I come up with song ideas when I’m on stage. I heard Taylor Swift once walked off stage in the middle of a show to record a voice memo of a song she just wrote whilst performing and then just carried on with the gig! That’s the sort of thing I’d do.”

The trio’s varied tastes in music probably helped them to branch out as three individual songwriters in their own right. All three have publishing deals and have had success writing for artists such as Dierks Bentley, Lee Brice and Charlie Puth to name a few. Ultimately they always gravitate back to each other. “When we’re writing for other people it’s somebody else’s story we’re telling, when we’re writing for ourselves it’s very autobiographical, and authentic to us”. The siblings were all heavily involved in the writing and production process of ‘Big Dreams’. “Me + You originally started in a writing session I was in with Hunter Phelps and Charlie Handsome” Ben recalls. “We were talking through ideas and Hunter said ‘What about nothing adds up like Me + You’. So we wrote about half the song and then I took what we had to Jenna and KK and we finished writing it.”

From small town beginnings, to moving to Nashville, Track45 are carving out a path in country music that they can walk along together. As they think back on those early days at Dollywood, Jenna ponders “Wouldn’t it be great if we could do this for the rest of our lives? Whether that’s in the street or in a stadium, but preferably in a stadium.” It’s clear that Track45 have achieved a lot, but they still have ‘Big Dreams’ to chase.

READ THE FULL ARTICLE IN THE LATEST ISSUE OF MAVERICK MAGAZINE! GET YOUR COPY HERE!