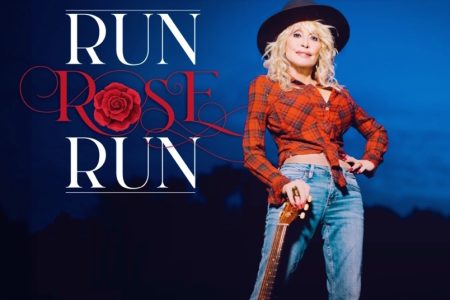 After the songs she’s written, films she’s acted in and composed for, funding a vaccine, and putting millions of books into the smallest of hands, you may be wondering if there’s anything Dolly Parton can’t do? In short, the answer is no as her latest adventure sees her pen her first novel with best-selling author and philanthropist James Patterson.

‘Run, Rose, Run’ follows the story of AnnieLee Keyes, an aspiring country singer as she arrives in Nashville with big dreams. There she meets retired country star Ruthanna Ryder who takes her under her wing and dashing guitarist Ethan Blake who believes in her from the moment he meets her. However, AnnieLee is on the run but what is she running from?

‘Run, Rose, Run’ captivated me from the Prologue, you find yourself holding your breath as you get closer to untangling the web of secrets that each character holds. The three main characters have a lot of depth to them, they’re well developed from the start. AnnieLee Keyes in particular is an easy character to connect with, you feel like you know her like a friend yet at the same time the sense of mystery that surrounds her and her past is written so well. It grips you, you don’t want to put it down until you find out what secrets she’s hiding. Her fieriness and determination to succeed inspire and you find yourself willing her on with each turn of the page. Meanwhile, that grit she shows also sparkles in Ruthanna Ryder’s character. You can see she is like the Dolly Parton or the Reba McEntire of the country world and there is an instant admiration and likability to her.

The intricate details within the story help to build the suspense and as things start to look up for a character you can feel something coming just around the corner, so you can never quite relax. However, there is humour in the dialogue, light hearted relief that punctuates the drama and darkness that surrounds the plot. Whilst Patterson undoubtedly brings that suspense and mystery, Parton sets the scene well, the landscape is so beautifully painted. Her knowledge of the music industry really brings the characters and story to life as she references real musicians, events and controversies like ‘Tomato-gate’ and publishing rights; allowing those outside of the industry to properly understand and empathise with the fight artists and writers have on their hands to own their own words.

Despite the detail in the build up, the climax seems to go at ten times the speed and to me wraps up a little too quickly (or perhaps I was a little too eager to get to the bottom of the mystery!) Once the antagonist is revealed, minor details throughout the novel begin to click into place and the lyrics on the accompanying album take on a whole new meaning. The audio book is definitely worth a listen too with Parton and Kelsea Ballerini bringing the drama to their voices as they act out the dialogue. I wouldn’t be surprised to see Parton and Patterson team up again in the future and the media interpretations of Run, Rose, Run expanding in the form of a film or musical version.

To summarise, it’s one of those books that plays on your mind all day if you have to put it down, wondering what will happen to the characters you’ve come to know and love and once you’ve finished reading, a pang of sadness washes over you that the story, the journey you’ve been on with these characters has drawn to a close.