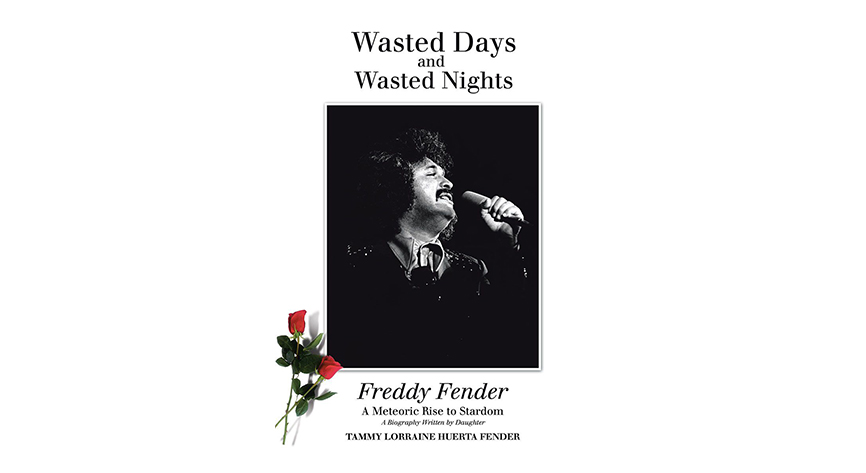 Freddy Fender, real name Baldemar Garza Huerta, was a genre breaking musician that is claimed by Mexican-American Tejano Country, Country Music and Rock and Roll music styles.  I’ve always been a fan of his incredible heartfelt vocals and passionate delivery. Freddy’s daughter, Tammy Lorraine Huerta Fender, wrote this tribute autobiography about her father to keep his memory alive with young and old generations for the groundbreaker he was.  What I enjoy about a book like this, if it is done well, is that you learn deeper details about the artist that only a family member can know and share.  Before his passing in October of 2006 Freddy Fender had made multiple attempts to write is own autobiography but always came to a stopping point.  Tammy felt that it was her duty, as a daughter, to accomplish what her father was not able to in his lifetime.  In the early pages Tammy shares a picture that includes her and her father while he is acting on the set of the movie “She Came to the Valley” in 1979.  The first meeting between father and daughter was not until Tammy was two and a half years old after her father was released from a Louisiana prison for possession of marijuana.  Freddy’s family immigrated from Mexico to find work in Texas during a volatile political time.  Pictures of the Huerta home in San Benito, Texas show it as a simple pieced together home with an outhouse attached.  Their family was very poor and Freddy was forced to steal for food and even dumpster dive behind grocery stores for thrown away food.  Even as a young boy Freddy would win contests singing songs and this carried over into his teen years.  In junior high school, the faculty allowed Fender to play at a school assembly.  Even then he predicted that one day his name would be on a big marquee, and he was right!  Some of the bars he would try to sing in wouldn’t allow him to enter due to the color of his skin so Freddy came up with a plan.  He would take his little brother and ask a patron of the bar to hold his little brother while he sang to the crowds, then he would retrieve his sibling and hurry back home!  Fender also served his country as a Marine but found it hard to adhere to the military regulations and rules.  Freddy made history as the first Chicano singer to sing Rock and Roll in Spanish.  Although he performed under different names he legally changed his name to Freddy Fender in 1958 after the American guitar and amplifier brand.  In the 1970’s Fender’s career flourished with hits “Before the Next Teardrop Falls,” “Secret Love,” and “Lose a Good Thing.” And a remake of his own song “Wasted Days and Wasted Nights” which reached number one on the Billboard country music charts in 1975.  Freddy won a total of three Grammy awards in his career and performed on the stage of Grand Ole Opry.  Tammy Lorraine Huerta Fender, the Tex-Mex Princess, has done her father justice with this book.  The family photos, honest stories and interwoven lyrics make a great read.  “Wasted Days and Wasted Nights” will help maintain his great legacy!