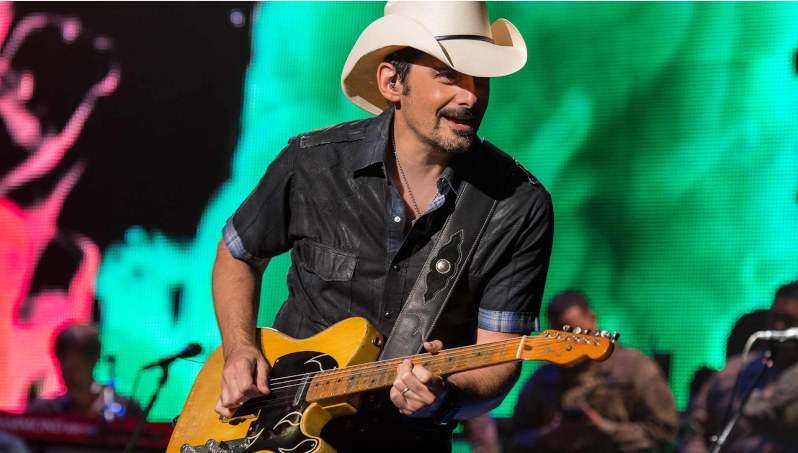 Brad Paisley said thank you to two New York residents combatting racism in his own way, by sending them crates of beer and hopping on a Zoom call with them.
Benjamin Smith and Marcus Ellis from New York are long time friends in Rochester, New York and wanted to open up a dialogue channel on racism following the tragic death of George Floyd by Minneapolis Police, sparking worldwide protests and riots.
They put signs outside the house of Smith, a former Marine, that read ‘Black or white, relax and have a beer’ and a picture of the two outside the house with the signs quickly went viral on the internet.
They asked people to join in and a vast majority of their neighbourhood turned up to get involved, before literally thousands of people clocked onto it on social media – including Paisley.
As such, the Grand Ole Opry member and three time Grammy winner arranged a Zoom call with the pair and as way of gratitude for what they were doing in their community and sent them hundreds of dollars worth of beer for them to get through while they were on the call with him.
In fact, Paisley sent them so many crates of Budweiser and Bud Light that he wiped out the contents of that particular brand at a nearby New York store for the pair and when speaking to them, he thanked them for their efforts and stated that he is always trying to do more to help the black community.
“I’m so inspired by you and we thought we should deliver more beer than you could possibly drink,” Paisley told them, as per CBS. “I’m trying to hear out my friends in the black community, that’s what you guys are doing together. It’s the same thing.
“I’m all ears, always have been. I’ve had big ears my whole life!”
Brad Paisley has been very busy in lockdown aside from surprising people in this way, with the artist hosting a number of stream gigs for his supporters to enjoy from the safety of their own home.