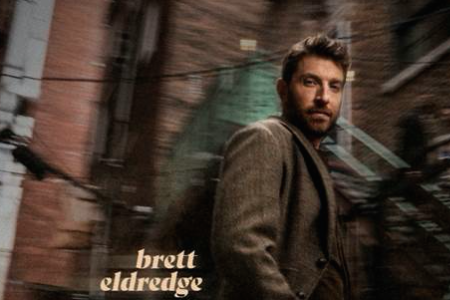 Supported by Luca Fogale, Brett Eldredge embarked on his UK tour last week. He was the last show I saw before the pandemic hit in 2020 and is one of the first to return to the UK since.

Fogale did an acoustic set to open the show, his songs, mainly ballads, were well written and he had a lovely tone to his voice. He was grateful for every minute that he was on stage. He’s certainly one to watch out for in future.

On to Eldredge’s set and it was clear from the first note that it was going to be an energetic performance, the lighting adding to the mood. A big grin on his face he seemed fired up for the Manchester crowd that wasn’t quite full but was loud nonetheless. During his second song the room got louder still as they sang their hearts out to the early chart topper, ‘Don’t Ya’ as Eldredge paraded up and down the stage.

He took it down a notch for ‘Gabrielle’ another fan favourite before playing some songs off his new record which he announced just over a week ago. His new single, the title track of his upcoming album ‘Songs About You’ was already on the lips of many Mancunians as Eldredge’s face lit up as they sung it with him.

It wasn’t the only new music he played as live renditions of ‘Good Day’ and ‘Holy Water’ were mixed in amongst his more established hits. He also shared the story behind ‘Want That Back’ speaking honestly about how he struggled during lockdown.

Much of his set was kept upbeat and energetic but it was refreshing when his band exited and he played an acoustic song, his 2017 hit ‘The Long Way’. Here, you could hear his voice, flawless in it’s delivery.

From that point on, he invited his band back on stage and turned up the heat. Manchester was bouncing and so was Eldredge. The lights turned out as he sung ‘Mean To Me’, the crowd lighting him up with the flashlights on their phones, to great effect.

He seamlessly flowed into a rendition of ‘My Girl’ from his hit song ‘The Reason’ which fans appreciated and thumped his chest at the end of ‘Lose My Mind’ as the noise rose inside the O2 Ritz. He found his second wind as he jumped around the stage, the lights increasing in intensity too.

He closed on ‘Wanna Be That Song’ but the Manchester crowd didn’t want him to go just yet, for all it’s intensity, it felt too short! He returned to the stage with his band for a cover of ‘I Can’t Make You Love Me’ before concluding on fan favourite ‘Beat of the Music’.

It was a fantastic night, one we wish we could have all over again!