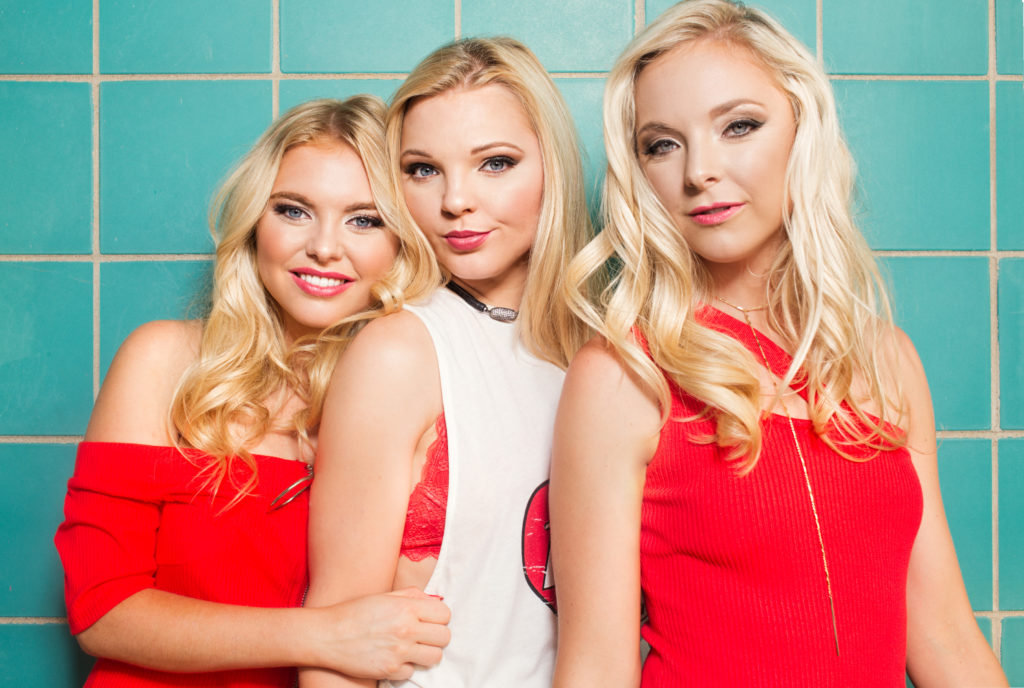 Popular rockin’ Country sister trio, Southern Halo, will be special guests of the British Country Music Association Awards on October 22. The American girl group, nominated in the International Act of the Year (Touring) award category, have also been invited to perform and to present an award to another of the evening’s hopefuls.
The entertainers made quite a name for themselves on this side of the pond in June as London openers for superstar Dionne Warwick at the David Gest Memorial Concert.  Following the awards show, Southern Halo will embark on a promotional radio tour that includes select performances in Scotland. A complete schedule appears below.
The Morris sisters hail from the small town of Cleveland, Mississippi in the heart of the Delta, the home of Blues and Rock & Roll. Natalia (principal songwriter, guitarist, lead vocalist), Christina (drums) and Hannah (bass) are Southern Halo, and they’ve created their own signature sound that offers a blend of multiple Country styles, current Alt. Pop vibes and a dash of Southern Rock. It’s youthful, energetic music – made immediately recognisable by the sweet familial harmonies that have become Southern Halo’s trademark.
In addition to their incredible harmonies, the girls lay it all on the line with high-energy stage shows during opening sets for top-tier acts and as headliners. To date, they’ve kicked off shows for Warwick, Brantley Gilbert, Eric Paslay, Maren Morris, Love and Theft, Tyler Farr, Randy Houser, John Michael Montgomery, Parmalee, Old Dominion, Jamie Lynn Spears, Craig Campbell, Uncle Kracker, Julie Roberts, American Young and B.B. King.
Last year they made their CMA Music Festival debut with appearances on two separate stages, were named Nashville Universe’s Vocal Group of the Year 2016, performed at an elite pre-GRAMMY Awards show in Los Angeles, and launched Townsquare Media’s “Say It With Pepsi” Concert Series. They returned to CMA Music Festival again this year, and have enjoyed a jam-packed schedule since then.
The blond beauties with their joyous attitudes enjoy a rigorous band practice regime, writing sessions, tour dates, photo and video shoots, and more. Musical tastes differ and with a range of influences that runs the gamut from Vince Gill, Keith Urban, Lady Gaga and Justin Timberlake (Natalia) to Dave Grohl and Pink (Christina) to Selena Gomez and Michael Jackson (Hannah), the creative forces in play are diverse. Their current CD, SOUTHERN HALO, was produced by SESAC’s 2012 Writer of the Year Catt Gravitt (Kelly Clarkson, Jake Owen) and Gerald O’Brien (writer of hits for Martina McBride, Trace Adkins). The disc, available for purchase on iTunes and Amazon, has generated three hit single/videos: “Little White Dress,” “Rewind” and “Living Like That.”
“We’ve been so fortunate,” notes Natalia. “We’ve gotten a lot of breaks since getting to the National finals of the 2014 Texaco Country Showdown, and we have worked hard to be worthy of them. We love the UK – the energy and love of music the people have there is inspiring – and we cannot wait to return.”
Southern Halo fans can catch them at these events:
Oct 22 / Wolverhampton – BCMA Awards – The Wolfrun Hall, 7 p.m.
Oct 23-25 / Radio visits, interviews, television
Oct 26 / Elgin, Scotland – Ex-Services Club, 8 p.m.-12 midnight
Oct 27 / Dundee, Scotland – No 1s, 9 p.m.
Oct 28 / Aberdeen, Scotland – Barra Castle Inverurie, 9 p.m. – 12 midnight