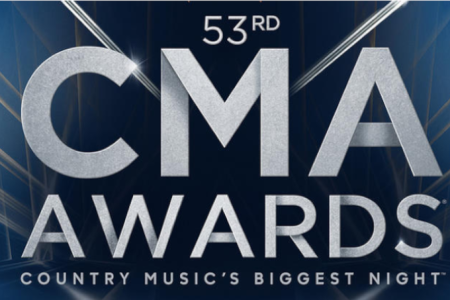 The 2019 CMA Awards took place last night (November 13), with Garth Brooks, Luke Combs and Maren Morris taking home key awards.
For the seventh time in his career, Brooks won Entertainer of the Year, while Combs won Male Vocalist of the Year as well as Song of the Year for Beautiful Crazy. There was some minor controversy as Combs picked up Male Vocalist, with it seeming like the crowd were booing – however, it later transpired that they were probably shouting “Luke”.
Meanwhile, Morris took home the gong for Album of the Year, while Kacey Musgraves was awarded Female Vocalist of the Year – making 2019 incredibly remarkable for her given her Grammy success earlier this year.
Elsewhere, Dan + Shay won Duo of the Year for the first time in their career, Old Dominion won Vocal Group of the Year, Ashley McBryde won New Artist of the Year and Blake Shelton won Single of the Year for God’s Country – which he also performed on the night.
It was also announced before the ceremony that Jenee Fleenor won Musician of the Year – the first ever woman to be nominated for the award, let alone to win it – which followed the earlier announcements of Lil Nas X and Billy Ray Cyrus winning Musical Event of the Year for Old Town Road (Remix) and Musgraves winning Music Video of the Year for Rainbow.
Hosted by Carrie Underwood, Dolly Parton and Reba McEntire, the 53rd incarnation of the CMA Awards was designed to celebrate the impact women have made in the genre on country music’s biggest night and it opened with a staggering 10 minute medley that featured a number of high profile artists.
Underwood, Parton, Reba, Jennifer Nettles, Kimberly Schlapman, Karen Fairchild, Tanya Tucker, Gretchen Wilson, Crystal Gayle, Terri Clark, Sara Evans and Martina McBride all joined forces at various different points to sing a number of female led songs in an empowering statement.
The newer guard of female country artists also had their say on the stage – after Kelsea Ballerini sang homecoming queen?, Lindsay Ell joined her on the small stage to start covering Girl Crush by Little Big Town, before Runaway June, Ashley McBryde, Maddie & Tae and Carly Pearce finished the song off on the main stage.
Reba, Underwood and Parton also performed individually on the night – Reba blowing everyone away by singing Fancy, Underwood performing her new single Drinking Alone and Parton joins forces with King & Country for God Only Knows and Zach Williams for There Was Jesus, before finishing her segment with a full choir for Faith.
There were a number of collaborations on the night as well – P!nk and Chris Stapleton for Love Me Anyway, Kacey Musgraves and Willie Nelson for Rainbow Connection, Lady Antebellum and Halsey for What If I Never Get Over You and Graveyard, Brooks and Shelton for Dive Bar, Brooks & Dunn and Brothers Osborne for Hard Workin’ Man and Dierks Bentley and Sheryl Crow brought Chris Janson, Joe Walsh and John Osborne on stage to perform Kris Kristofferson’s Me & Bobby McGee.
Also on the night, Dan + Shay performed Speechless, Old Dominion played One Man Band, Morris sung Girl, Keith Urban played We Were, Eric Church sang Some of It, Miranda Lambert nailed It’ll All Come Out in the Wash, Thomas Rhett sang Remember You Young and Luke Combs performed Beer Never Broke My Heart.
The list of winners in full are:
Entertainer of the Year – Garth Brooks
Male Vocalist of the Year – Luke Combs
Female Vocalist of the Year – Kacey Musgraves
Album of the Year – ‘GIRL’ by Maren Morris
Vocal Group of the Year – Old Dominion
Duo of the Year – Dan + Shay
Song of the Year – Beautiful Crazy by Luke Combs
New Artist of the Year – Ashley McBryde
Single of the Year – God’s Country by Blake Shelton
Musician of the Year – Jenee Fleenor
Musical Event of the Year – Old Town Road (Remix) by Lil Nas X and Billy Ray Cyrus
Music Video of the Year – Rainbow by Kacey Musgraves