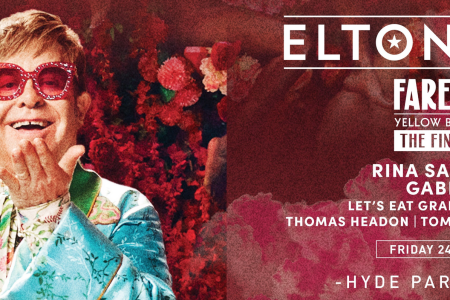 BST Hyde Park has returned in style with Sir Elton John curating the line-up on day one and finishing off with a two and a half hour hit-filled set.

With the sun beating down on revellers as they arrived in Hyde Park, Juanita Euka was lighting up the Birdcage stage as she opened proceedings at BST Hyde Park 2022 with a smile on her face. It will be a busy few days in London as The Rolling Stones, The Eagles and Adele are all set to grace the stage in Hyde Park but day 1 will struggle to be topped. There was an energy and atmosphere around the park that was infectious and it started with the artists, each one gave it their all.

All who played on the Birdcage stage to the Rainbow and Great Oak stage was hand chosen by Elton and have featured on his apple music show previously. A stand out for me, was an intriguing character by the name of Tom A Smith who was sandwiched in between Euka and Tom Heaton on the Birdcage stage. Smith, just 18 years old, though not country, had some really strong storytelling lyrics in his songs and his band was a tight knit group. It was clear he was buzzing to be there as he opened the set with ‘Could I Live With Being Fake’.

Following on from him was Tom Heaton who led everyone in a Taylor Swift cover of ‘We Are Never Ever Getting Back Together’ whilst Gabriels drew quite the crowd over at the main stage. However the main attraction, after meeting with the artists he selected came on stage to a rammed Hyde Park. Instantly they abandoned their blankets and their churros and were on their feet, swaying and singing their hearts out as the legendary musician began to rattle through hit after hit.

‘Tiny Dancer’ appeared early on in his set, the crowd really finding their voice for the chorus before ‘Rocket man’ continued in fine voice. He could tug on your heartstrings too as ‘Someone Saved My Life Tonight’ and ‘Candle in the Wind’ also featured, a couple of classics in Elton’s repertoire that he executed flawlessly and the fans went wild for. He paid a touching tribute to George Michael before launching into ‘Don’t Let The Sun Go Down On Me’, the song he sang with Michael, and took to number one, back in 1991. In his encore he shared ‘Cold Heart’ followed by ‘Your Song’ which he introduced as his latest hit and his first hit.

Whatever music speaks to you, I think everyone can appreciate and admire Elton’s talent. It was a fabulous show on what was a well organised line up.

Later on this weekend, The Eagles, Little Big Town, Alison Krauss, Cam and Morgan Wade will all take to the stage at BST.