Buckle and Boots announces 2022 line up 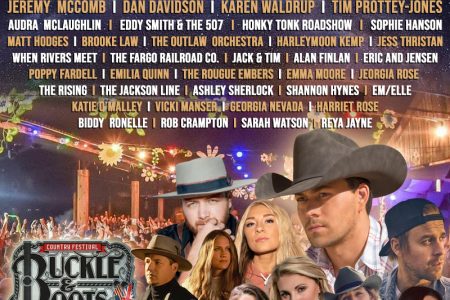 Following last summer’s hugely successful return to delivering country music at the farm, Buckle & Boots returns with another stellar line-up for 2022, taking place over the bank holiday weekend of the 2nd-5th June at Whitebottom Farm near Manchester. Continuing their loyal commitment to supporting homegrown talent, as well as introducing rising stars from across the pond to a UK fan base, this year once again sees an array of talent from all over the world, including Sweden, Canada and the United States.

Buckle & Boots are delighted to be bringing back William Michael Morgan who was first introduced to, and subsequently warmly embraced by, a UK audience at B&B 2019. Named as a “Country Artist You Need to Know” by Rolling Stone, his infectious brand of traditionally influenced country music helped him sell out a UK tour at the back end of 2019 and he will no doubt, once again, capture the hearts of the festival attendees.

Following the tradition of presenting Canadian country stars such as Brett Kissel (2019) and Tebey (2021), this year’s line-up boasts two artists from the Land of Maple Leaf. Québec native, Matt Lang’s latest album debuted at No.1 on the iTunes all genre chart, on the iTunes country album chart and was the #3 selling album in Canada. His singles ‘Getcha’ and ‘In a Bar’ reached Top 5 at Canadian country radio and he recently received his first CCMA Nomination for Rising Star of the Year. Alberta’s Dan Davidson has created undeniable momentum in the last few years with 6 CCMA nominations, 10 ACMA awards, a gold record and a number 1 selling Canadian song and record.

Texas born artist, Julia Cole, has amassed over 50 million streams, has been featured on CMT, Spotify’s Hot Country as well as Apple Music’s Today’s Country and many more. Julia has toured globally in over 10 countries opening for acts like Dan + Shay, Carrie Underwood, Kenny Chesney, Kane Brown, Dierks Bentley, Lee Brice and Runaway June to name just a few. Julia was recently named in the “CMT Next Women of Country” Class of 2022.

Buckle & Boots will once more welcome some of the best UK talent to their stages this summer.