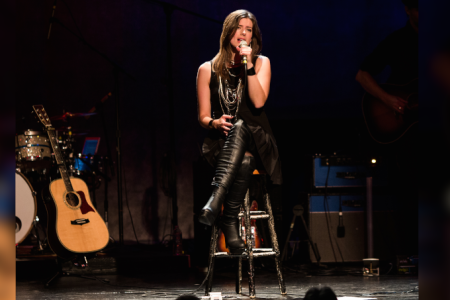 Following the release of her new self-titled album (which we gave 4 stars in the current issue) BBC Radio 2 favourite Callaghan heads back to the UK this month for her latest headline tour.

Kicking off on October 30 in York, the 8-date tour takes in Edinburgh, Leeds, Preston, Birmingham, a show at Dingwall’s, Camden for the London Roots Festival, and Bristol before the final show on November 9 on the Wirral.

We asked Callaghan what we can expect from this tour:

“I’ll be performing songs from my previous albums, as well as lots of tracks from the new record, and I’ll be joined by some amazing musicians. I always aim to take the listeners on a journey throughout the show, with songs to tap their feet to, some to make them cry, as well as lots of stories and laughs. This tour will be going from Bristol to Edinburgh and lots of places in between so hopefully I’ll be coming to a town near you!”

Originally from Lincolnshire Callaghan moved to the USA in 2010 to tour and record with Atlanta based Grammy nominee Shawn Mullins. In 2015 she recorded her second album A History of Now in Nashville and, after five years of building her audience across the USA, returned to Britain to tour.

Long championed by the BBC’s Bob Harris who calls her “a wonderful artist…hugely talented” she went on to appear at C2C and have three singles added to the BBC Radio 2 playlist and has made appearances at multiple UK festivals including Cornbury, Cambridge Folk Festival and SummerTyne.

Her UK touring has continued to grow along side her US shows, and in July Callaghan played in Hyde Park as part of Barclaycard British Summer Time, sharing the bill with Paul Simon, James Taylor and Bonnie Raitt.

Her latest album has been getting a great response, with Maverick’s review describing it as “a euphoric collection of piano led songs” and Callaghan as “a singer-songwriter of a seriously high standard” . Callaghan’s Album Release Tour offers her UK fans a chance to hear the songs live!