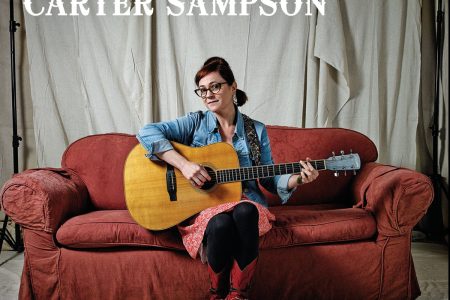 Oklahoma’s Carter Sampson returns to the UK in April and May for a short run of dates that include two shows at the much-loved Kilkenny Roots Festival. She will be releasing ‘Queen Of Oklahoma’ a fourteen track compilation drawing on tracks taken from her previous three albums. The album is released on 21st April.
Sampson’s latest album ‘Wilder Side’ has been picking up wonderful reviews in the press and picking up plays on National radio. Bob Harris at Radio 2 described the album as ‘impeccable’,  while she has picked up plays on BBC Ulster, BBC London, BBC Scotland, Resonance FM and all the major roots shows.
She will be touring alongside BJ Baartmans.
APRIL
29th – Kilkenny Roots Festival
30th – Kilkenny Roots Festival
MAY
May 1st – Voodoo Rooms, Edinburgh
May 3rd – The Admiral, Glasgow
May 5th – The Hut, Corby
May 6th – Little Rabbit Barn, Chelmsford (House Concert)
May 10th – The Musician, Leicester
May 11th – Union @The Con Club, Lewes
May 12th – The Forge, Anvil Arts Centre, Basingstoke