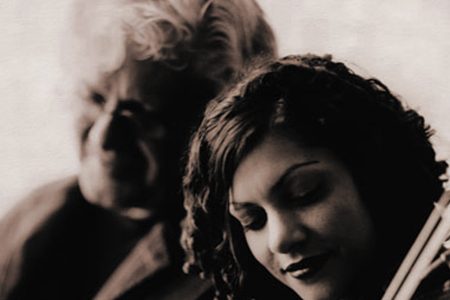 Newly-elected Songwriters Hall of Fame member Chip Taylor and acclaimed Americana performer Carrie Rodriguez have announced a special series of tour dates reuniting the dynamic pair, who wowed fans and critics alike in the past with a string of celebrated albums and live shows. Dubbed the “10th Anniversary Red Dog Tracks Reunion Tour” because it salutes the recent deluxe reissue of the duo’sRED DOGS TRACK CD, the tour will focus on USA shows in Texas, New York City and Northampton, Massachusetts, as well as Canada.
“When we toured in the past, every time we hit the stage it was total chill time … physical chills… from the sound of our voices caressing each other … to the manner in which the voices drifted in and out of specific emotion that was being newly created. It was never the same … but it was always magical,” says Chip Taylor.“Rehearsing these C&C songs now is reminding me how magical it was and will be. Can’t wait to see my amazing and oh-so-talented and vibe-y friend and for this tour to start!”