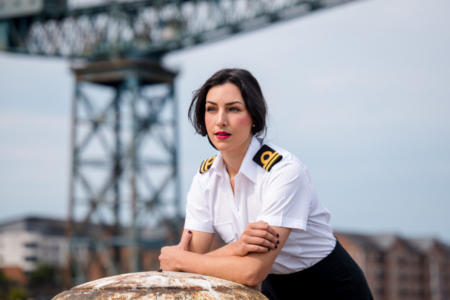 Chloe Matharu is a singer-songwriter and Celtic Harpist in Wemyss Bay, Inverclyde. Following her well received singles ‘Clyde Islands’ and ‘Catching A Free Ride’ released earlier in the year, Chloe is excited to announce her new single from the album out this Friday – September 9th; the third single from her forthcoming debut album of the same name, due for release on September 30th, 2022.

Many of Chloe’s songs draw on her experience as a Navigational Officer in the Merchant Navy, sailing around the world on oil tankers and are inspired by the natural world experienced at sea. As a result, her thoughtful and sensitive songwriting offers an insight into the modern seafarer’s life. Chloe’s voice, coupled with her harp playing, form a haunting combination perfectly suited to the reflective nature of her material.

Speaking of the creation of the new single, Chloe explains;

“As a deck cadet I trained onboard Coastal Oil Tankers and spent much of the time sailing around Scotland and Ireland. At the time I was frustrated about being kept in Northern Europe and dreamed of bigger and better ships that would sail to far flung, exotic places. However, when I finally made it to these vessels I realised my cadetship was the best time of my life, sailing on tiny ships and feeling part of a small crew and close to the sea. This song is reminiscent of the short voyages on these tankers, around familiar places, and for this reason I returned to one of my first ports of call, Grangemouth, for the the artwork of this album.”

In her recorded work Chloe blends field recordings of the natural world with that of the harp, creating an evocative backdrop for her emotive lyrics and melodies. Her music offers a new maritime narrative, the voice of the female seafarer and her talent affords a refreshing outlook on this new tradition of maritime Folk music.

Of Scottish, Welsh and Punjabi heritage, Chloe sings both in English and Welsh. Whilst crossing boundaries in her career at sea, Chloe is keen to explore breaking down cultural and gender barriers through the language of music.

Since starting to perform live in October 2021, Chloe has enjoyed playing an impressive line up including venues such as DKOS Celtic Connections, Glad Cafe Glasgow, Greenote in London, Beacon Arts Centre Inverclyde, Cwtch Café Pembrokeshire, Unearthed Festival, Fishguard Folk Festival, Fringe by the Sea and Hartlepool Folk Festival, to name a few. She has also recently been chosen as one of the sixteen artists selected globally for the Fatea Showcase, Canada.

Chloe’s eagerly awaited debut album ‘Small Voyages’, which was recorded at Dramatic Studios in Ayr and produced by musician and producer Brian MacDonald of the MacDonald Brothers duo, is due for release on September 30th 2022.