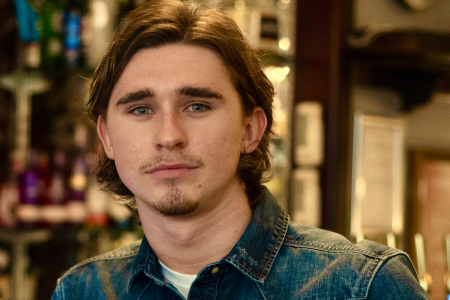 Chris Andreucci’s career so far has been something of a whirlwind. The scottish singer-songwriter was spotted by his publishing group whilst passing through Nashville after going to America on an exchange trip with University. Speaking to me from Mexico, Chris chatted about his career so far and in particular his EP , ‘What Don’t Kill You’ which you can read about here! He also touched on his writing process and plans for the future.

When did you first realise you wanted to make music for a living?

I’d always been musical, I wrote my first song when I was about 13 – I don’t know how good it was. As I got older it was just a way of expressing myself, as a therapeutic way for me to say what I wanted to say. As time went on I realised other people might enjoy hearing these tracks. Then I went to University in Glasgow and decided I might as well put on a few shows around the city and I got a bit of a following. People encouraged me to start releasing my music so I released my first single, ‘Talk To Me’ back in 2018. It was more Indie- Scottish sounding music but it gave me a passion for songwriting. In my last year of my degree I went on an exchange trip to North Carolina and when I was there I did a few gigs. When I passed through Nashville I was fortunate enough to get signed to a publishing deal with Century Music Group so it all happened really quickly, I wasn’t looking for it; I still thought I’d go into some kind of sales role in business. I sat down with my family and we decided I’d be daft not to take up the opportunity to pursue something I love so much. That’s where I’m at now!

What did your parents play to you on long car journey’s and what are you choosing to listen to now?

I’ve got to say a big thanks to my Dad and my Mum for the music they played to me growing up. I had such a good musical education – there wasn’t just one style we listened to. I remember the Bruce Springsteen record ‘Born to Run’ playing all the time, Oasis, David Bowie, Marty Robbins, Willie Nelson, Kris Kristofferson so I had an eclectic musical upbringing. It gave me a better understanding of songwriting and because it was such a varied collection it’s helped make my songwriting a bit different from what everybody else is writing. In terms of what I’m listening to I’m a really big fan of two writers right now, Hardy and Ernest. They’ve written some great songs, they’ve written a lot of Morgan Wallen’s songs, he’s a great artist.

Tell me a bit about your songwriting process, is it different every time?

For me it has to be about a hook, something that really stands out, so when I’m living my life I’m constantly scanning, looking for something that’s a little bit different. I always write things down on my phone and then when I’m doing my writing sessions – I’m doing three or four a week at the moment – I go back through that list, pick something out and put a melody to it. I try to build the chorus around that hook then. That’s what makes Country songwriting so great, being able to say something in a different way, in a way that’s not been said before. There’s no set process though, I believe it comes from a greater power, it flows out of you.

Tell me about this EP ‘What Don’t Kill You’, what can people expect if they haven’t heard your music before this?

Most of the tracks were written during my exchange trip to North Carolina. It was experiencing something so different to what I’d experienced before. I’m just a guy from Scotland who’s travelled the world a lot but to go out there and experience so many different things and meet so many new people… it was just essentially telling stories that I thought people would relate to. All the songs are self penned, I have only started co-writing recently in the last six weeks or so, I’ve got a lot more sessions planned in Nashville next month. A few of the tracks are very personal on this EP. It gives you an understanding of me as an artist, where I am and where I’m going. It begins with a drum driven track in ‘Hear Comes The Rain’ and goes into the heartfelt ‘Tonight I’m Yours’ which tells the story of a young military father who has to leave his family. Then it goes onto a typical country song about drinking to solve all your problems and realising it actually makes them worse. The most personal track is ‘Thunderstorms and Rain’ which is about losing someone in my family and that person was a catalyst for me to do what I’m doing now. If one person can draw comfort from that then I’ve succeeded with this EP.

You said co-writing is quite a new thing for you, do you still get nervous in sessions, opening up with ideas that are sometimes personal?

Definitely, when you’re writing on your own there’s no expectation. There shouldn’t be any pressure in a co-write either but when you go in there it can be a bit uncomfortable especially when you’re not an American guy! Songwriting is so vulnerable, you’re writing about things you may have never told anyone before but then you have to remember that all the other writers in the room are having to do the same thing. I like the trust element in co-writing. I’m looking forward to getting back to Nashville and doing more of those sessions.

Probably the Coronavirus track I wrote. It’s called ‘Dear Corona’, it was a letter to Corona virus but I also likened it to Corona beer and how before the virus, Corona was a good thing in your life, and now it’s tainted it.

When you’re on stage are you completely focused or do you let your mind wander? We call it your mid-gig thoughts!

It depends, if it’s a really rowdy crowd I’m quite present and I’m fully interacting with them. If it’s a more intimate show, you get lost in the moment and in the lyrics and you sort of drift away. It’s an out of body experience.

If you was to describe your personality as a flavour of crisp, what flavour would you be?

They do those sensation crisps, walkers sensations. They’re a little bit fiery but you keep going back for more, I can be fun and a little bit cheeky, but I’m also a good guy to hang around with I think! I’m a happy person, I like to make people laugh.

Have you taken up anything new during Lockdown?

I started running a lot more, I was always an active person but since that was the only thing you could get out and do, I started doing that a lot more as it helped to clear my mind. I would also use that time to listen to new music.

I arrive in Nashville next month so I have a lot of co-writes, writers round shows and meetings. I’m excited to play a gig in front of people again! I think I’ll be quite nervous but I’m excited to get back out there and reconnect with everyone – there’s a lot of songs to be written and good times to be had.