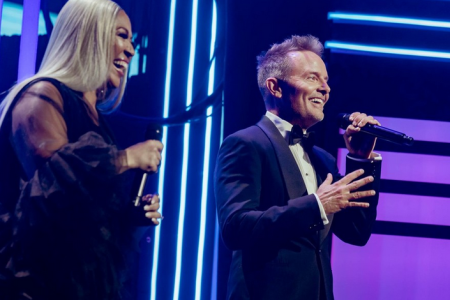 Chris Tomlin, who TIME magazine heralded as the “most often sung artist in the world” as 20-30 million people around the globe sing his songs in church every week, co-hosted the 53rd Annual GMA Dove Awards earlier this week and was honored with the 28th Dove award of his career. Tomlin received his Dove award in the Christmas/Special Event Album of the Year category for his 2021 Christmas album, Emmanuel: Christmas Songs of Worship.
Tomlin hosted the Dove Awards, for the first time, with multi-platinum selling artist Erica Campbell, half of the Gospel duo Mary Mary. This year’s broadcast exclusively aired earlier tonight on TBN and the TBN app, Friday, October 21st, 2022 and will re-air at 10:00p.m. ET, with encore presentations on October 28th, 2022, at 8:00p.m. ET and 10:00p.m. ET.
Tomlin recently shared with People.com “Viewers can look forward to not only an incredible night of celebration but also of amazing music and worship. We will get to come together and celebrate the artists who have paved the way, the artists of today, and hopefully help inspire and launch the generation to come.”
The recognition at the Dove Awards continues the tremendous success Tomlin has experienced since last fall including a CMT ‘Crossroads Christmas’ performance with Brett Young, Tomlin’s annual ‘Good Friday Nashville’ expanding globally with an exclusive live premiere on Facebook, setting a career attendance record with an unprecedented concert at Los Angeles’ Banc of California Stadium, becoming the first Christian artist to play three sets of back-to-back concerts at Red Rocks Amphitheater, being selected as a one of four CMA ‘Artists of the Day’ during 2022 CMA Fest, performing a song from his new album ALWAYS on the Kelly Clarkson Show earlier this month and currently sitting in the Top 5 on the Christian chart with radio single “Always.”
In November Tomlin will launch the first of two headline concert tours out before the end of this year: the third leg of the “Tomlin UNITED Tour,” named by Pollstar as a ‘Top 10 Worldwide Tour,’ kicking off November 3 and the “Chris Tomlin X MercyMe: A Winter Tour” scheduled for Dec. 1-13.
In September Tomlin released, ALWAYS, a new full-length worship album. The project contains 13-tracks all of which were co-written by Tomlin except for the historical and beloved hymn “Oh Lord, You’re Beautiful” which features Steffany Gretzinger. The Tennessean claimed, “For three decades, Christian musical artist Chris Tomlin’s been as much a faith leader as a songwriter, able to parlay his faith in spirituality into influential and popular music. Via ALWAYS, his seventeenth album, he surges forward from leader to legend in the worlds of gospel and contemporary Christian music…The 17-time Christian radio chart-topper releases new music that cements his legendary status in the genre.” Elevation Worship, Brandon Lake and Lady A also appear on the album. The album’s title track is Tomlin’s current radio single and is a nod to Hebrews 13:8, “Jesus is the same yesterday, today and forever.” The project was produced by Ben Glover, Jeff Sojka, Bryan Fowler, Ed Cash, Jonathan Smith and Dave Haywood of Lady A co-produced “The Answer.”